How best to appreciate innovation in gaming? Do we praise a new release simply because it’s different from the rest of the pack? Or should the way that it plays carry the greater weight? It’s a high-falutin’ philosophical conundrum, to be sure.

With Blueprint 3D, a game that manages to be both totally unique and highly engaging, we’re not going to find a decisive answer. Sorry to get your hopes up, folks. What we do get, however, is something ambitious, remarkable, and utterly unmissable.

As the title suggests, the game is built around the concept of blueprints in three-dimensional space. The blueprints – all 240 of them – have been scrambled and distended in a seemingly random arrangement. What gives?

It’s actually an optical illusion designed to test your powers of perception. You have to swipe the touchscreen to rotate the clusters of lines, dots, and shapes in all directions and on all planes, until gradually they cohere into a single image.

The moment the image clicks into place, your brain experiences a strange reptilian thrill, like it’s been dunked into a vat of ice-cubes.

Blueprint 3D is simple to play but complex to behold, your brain unconsciously processing an abstract jumble on the screen and – in coordination with your fingers – feeling its way towards a solution.

Each player experiences the process differently, and at varying speeds of recognition - it might even depend on how much coffee you’ve had to drink beforehand.

There’s a countdown timer in the background, so you’re not entirely free to tackle the blueprints at your leisure. There’s a maximum of three stars to be won on each, and the more time you take the fewer stars you earn.

The stars are necessary to unlock the later stages, all grouped and organised into seven theme packs: Architecture, Electronics, Medieval, Military, Space, Technology, and Vehicles.

The presentation of Blueprint 3D is rather clinical, and what little personality it has comes through in the blueprints themselves.

As you progress through the themes the texture of the plans will change, as will the soundtrack. Flashes of humour are provided by the objects you’re tasked with assembling - with its aliens, ray-guns, and flying saucers, the Space theme is especially surreal.

If you get stuck on a blueprint you can use up to five 'solutions' to instantly unscramble the puzzle. There’s an option to buy more of them, but fortunately this is the only instance of the dreaded freemium model.

Other features include an unlockable trophy cabinet, a list of Game Center achievements, and global leaderboards. There’s also the promise of extra theme packs to be added in the near future.

Because this is a wholly original product, a new genre unlike anything else currently available on the App Store, rival developers may well copy the formula, and perhaps even improve it. That’s an exciting prospect for the future. 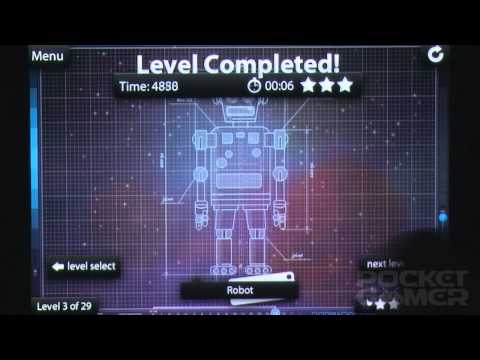 Blueprint 3D is a magical marvel: more than just a bold experiment, it’s also ridiculous good fun
Next Up :
Hundred Days review - "A success for the management genre"

FDG will turn your perceptions with iOS puzzler Blueprint 3D

Think in the third dimension

A mysterious clutter of seemingly chaotic dots and lines