Will have cross-save and PlayStation TV support too

We told you last week that it seemed very likely that Bloodstained: Ritual of the Night would be heading to PS Vita. And not it has been confirmed.

The $3.5 million funding goal on the game's Kickstarter was reached on June 6th to secure that PS Vita port. It turns out that it won't just be a digital release either as a physical version of Bloodstained will be available for PS Vita too.

With that funding goal reached, Armature Studio (who is handling the port) revealed more of the features that will be included in the PS Vita version of the game.

First off, you'll be able to export the game's music to your PS Vita library so you can listen to it outside of the game.

Secondly, the PS Vita version will have cross-save support with the PS4 version, meaning you can carry on the same game across PlayStation platforms.

Thirdly, there will be touchscreen support for the maps so you can draw on them with your finger.

Lastly, it will be fully compatible with PlayStation TV meaning you can stream it on to the big screen from your PS Vita.

Developer Inti Creates also revealed a new stretch goal obtainable at the $4.75 million mark. Reaching it means a new side story mini-game will be available separately on the 3DS eShop and PSN Store for PS Vita.

However, there are only four days left on the Kickstarter and that goal is about $1 million away. So that may not happen. We'll have to wait and see. 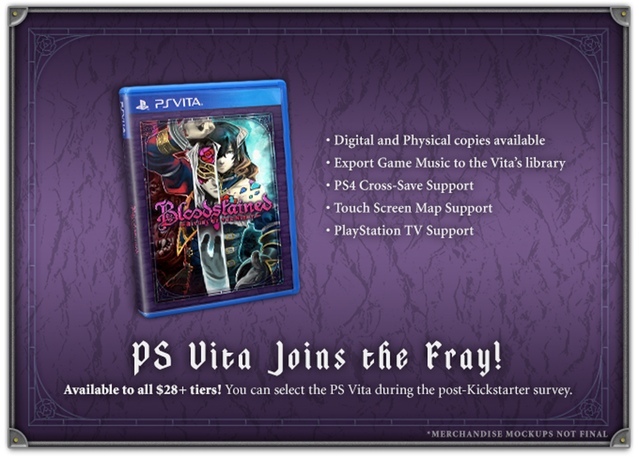 If you're not familiar, Bloodstained: Ritual of the Night is an exploration-focused action platformer that takes place in a gothic, demon-fill castle.

It's the spiritual successor to Castlevania: Symphony of the Night and is being headed by that game's designer, Koji Igarashi.

Read more about it and the PS Vita version in our previous post.

Bloodstained: Ritual of the Night gets character and game mode in new update