You'd think that finding a hook for your game is more important now than ever. In a saturated market you need something that sets you apart, a talking point to draw buyers in.

Beat Hazard Ultra's big claim is that it uses your iTunes library to create a game that's unique to you. As well as providing a soundtrack, your music creates the ebb and flow of the twin-stick shooter, meaning no two levels are the same.

It makes for some interesting aural and visual fireworks, but a game needs some pretty serious gameplay chops to back up its big idea. Luckily, Cold Beam Games's title has them in spades.

You pilot a tiny spaceship around a Geometry Wars-style play pen, hemmed in at the edges and assaulted from all sides by the very worst the universe has to throw at you. It's your job to survive until the end of the song.

Enemies range from floating lumps of rock to multi-tentacled space starfish who fire out blankets of deadly rockets. Your standard cannon fodder are streams of grey fighters, all ready to be dispatched by the neon bullets you spew forth.

Hyper-bright slaughter is the order of the day. The more you kill, the more your multiplier racks up, the more points you score once the song's finished. Points are turned into XP, and a ranking system showers you with accolades.

You can spend cash you pick up in the game on perks - additional bonuses that let you score points more quickly or bank more lives for your next assault on a particularly tricky song. You can customise your perk load-out as you go, leaving you with a ship designed for your style of play.

The action is searingly bright, the screen often filling with multicoloured explosions as you slice through another wave with burning hot jets of laser. Things get taut, too, with dodging and weaving a much more useful tactic than frontal assaults.

In a strange way, Beat Hazard Ultra's hook is the least interesting thing about it. Unless your iTunes account is full of pumping techno, then the on-screen action is likely to be at odds with the music that's generating it. And the tinny pips and whistles of lasers firing and ships exploding get in the way as well.

Still, the frantic gameplay and gorgeous graphics really make the game stand out. It's quick and easy to pick up and play, but strong enough that those looking for a shooter to invest some time in aren't going to go away disappointed.

The music-powered gameplay might be the talking point that draws people in, but the blistering old skool shooting is what's going to make them stay. They just might end up staying with the sound turned down. 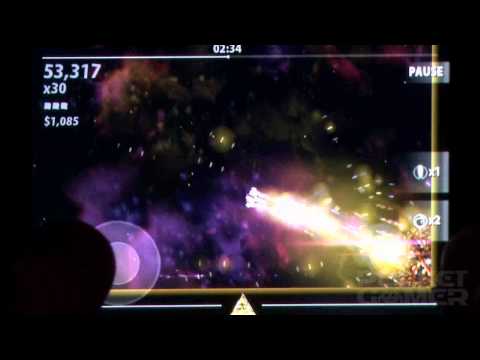 A game whose major selling point isn't actually that important, Beat Hazard Ultra has a strong enough shooting mechanic to avoid any accusations of being a gimmick
Next Up :
Alien: Isolation review - "Chestbursting fun in the palm of your hand"