He comes equipped with pineapples for throwing

Back in March, Halfbrick Studios released a new racing game for iOS and Android called Battle Racing Stars. It featured a host of characters from their other titles and their latest update will introduce another to celebrate the launch of Fruit Ninja 2.

Yes that's right, Katsuro of Fruit Ninja fame, is available to play as in the game now alongside the likes of Dan from Dan the Man, Sensei also of Fruit Ninja fame, Zombie T-Rex from Age of Zombies and many others. You can see him in action, merrily throwing pineapples, in the embedded trailer below.

If you're unfamiliar with Battle Racing Stars, it is a side-scrolling racer where you'll look to outrun your opponents to reach the finish line first making use of their unique abilities along the way. There are multiple game modes to select from including the very straightforward Quick Play which pits you against three other players. 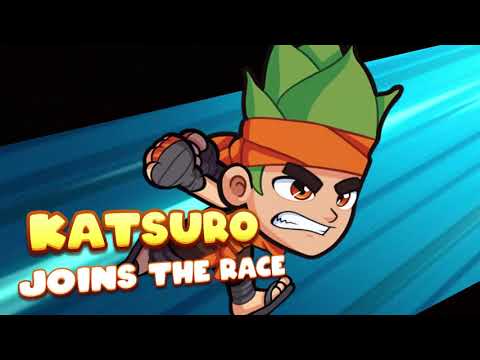 Beyond that, there's also UFO Apocalypse where you'll be racing whilst also trying to avoid being sucked up by the extra terrestrial's tractor beam. Or perhaps you'd prefer Auto-Boost which sees your character constantly moving at maximum speed the entire time, making the route you take across the map the most important factor.

Then there's Flappy Bomb that sees an evil explosive pursuing all of the players where the person who hangs in last place for too long will get blown up. Finally, there's Portal Mania which sees all of the maps found in Battle Stars racing mixed into one.

Battle Racing Stars is available now over on the App Store and Google Play. It's a free-to-play game with in-app purchases.

Looking for more top-tier multiplayer games that you can play on the go? Here are 25 of the best for iPhone and iPad
Next Up :
Letter Rooms adds an advent calendar to the anagram game, with a new puzzle to be released every day this December