Like Batman’s cloak at the end of Rocksteady’s two Arkham games, I'm torn. Unlike Batman's cloak, I'm torn not because of henchman brutality but because of iOS spinoff Batman Arkham City Lockdown.

There’s no denying that NetherRealm has done a good job replicating the physicality and crunching combat of The Dark Knight on the touchscreen. Quips about the title being ‘Infinity Bat’ are wider of the mark than the screenshots may have you believe.

However, while I was constantly drawn back into the game with every successive restart, repetition and control niggles prevent this particular bat sign from ascending high above the App Store sky.

The game slots itself neatly into the Arkham Asylum/City storyline by picking up just before Mayor Sharp has persuaded city hall to build his ‘visionary’ super-prison in old Gotham.

A number of the famous (and not so famous) inmates from Arkham have escaped to the mainland with their various crews, and it’s down to you to bring characters like the Joker, Two-Face, and - er - Deathstroke to justice.

Each area is split up into a series of pre-determined fights against the minions, followed by a boss fight that usually introduces a new mini-game or concept to mix up the gameplay.

For the most part, though, you’ll be watching Batman run around corners and jump off ledges, before taking control to give one of three types of henchmen a sound beating.

Combat works a little like Infinity Blade’s, with a few notable changes added by the Mortal Kombat developers.

The principle change concerns combos, which you perform by swiping in certain directions in sequence. Finish off a combo and your opponent will be knocked back with a heavy hit.

Other new additions to the swiping-combat games are the ‘unblockable attack’ and counter. Should a red icon appear above an enemy’s head, you have to quickly tap the screen to avoid getting hit.

Meanwhile, countering an enemy (and often disarming him in the process) involves speedily tapping two marked areas on his body when the opportunity presents itself.

As this is Batman, you also have the option of employing a few special gadgets to turn the battle in your favour.

Items such as smoke bombs, electric batgloves, and flocks of bats can be unlocked as you progress through the game, and upgraded using Waynetech points earned by (slowly) levelling-up.

The Joke's on you, bats!

These gadgets and extra additions to the combat don’t keep the feeling of repetition setting in, though, especially as most minion battles can be won by simply sliding your finger madly across the screen until they fall over.

Despite the fighting being relatively simple for the most part, the excellent visuals and crunching sound effects add weight to each punch and kick, while the voice acting from the cast is universally strong.

Thankfully, fighting the bosses is far more satisfying than fighting their minions, with an entertaining showdown against Two-Face (that involves guiding your batarang by tilting the screen) and a battle against Deathstroke that can see you disarming his various weapons as the fight progresses (if you choose to do so).

The game comes to its obvious conclusion after about an hour of play, unlocking all areas again for a harder playthrough.

It’s here where the control issues start to bite. Not all swipes or taps are recognised by the game, and while this isn’t such a major issue at first thanks to the generally forgiving difficulty, once your opponents can take off half your health with one hit it becomes incredibly frustrating.

This frustration is compounded by the fact that should you fall in battle the game pops you right back at the start of a sequence. Slogging your way through the minions only to have an unfair shot land on you by the boss is utterly heartbreaking.

Up until that point, Batman Arkham City Lockdown is a simple, short, but nevertheless interesting variation on the template laid down by Chair in Infinity Blade.

With better controls and more engaging opposite, it could have been the world's greatest detective. It isn't, but it’s not a super-villain either. 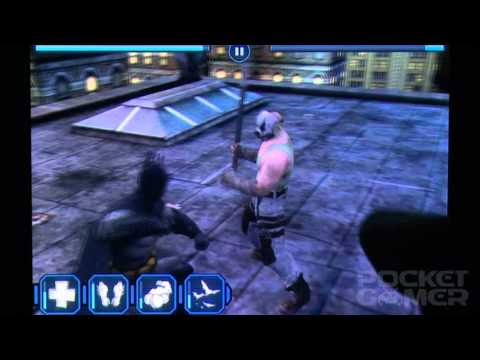 Batman Arkham City Lockdown adds its own spin to the Infinity Blade-styled action game and packs a meaty punch with its presentation, but it never quite takes flight
Next Up :
Backbone One review – “Turn your iPhone into a games console”

Batman vs Superman: Who has had the best mobile games?

History in Handheld: The Dark Knight rises from Game Boy to iPad