iOS + Android
| Azkend 2 - The World Beneath

One of the stranger innovations in the puzzle game genre over the past few years has been the inclusion of narrative.

Azkend 2 - The World Beneath is a fine example of this trend. The story, which mimics the Victorian science fiction of Jules Verne, provides not just impetus, but new power-ups, hazards, and styles of playing through the various puzzle screens you're presented with.

It's certainly an entertaining romp, but it's let down by the occasional poor design decision.

Journey to the bottom of the world

The game starts out as a reasonably sedate match-three puzzler. You're repairing your binoculars, and you need to gather the requisite parts. The problem is, the ship you're travelling on is beset by fog, so you need to clear that up before you can continue.

Cue a grid of hexagonal tiles, some of which are obscured by puffs and wisps of grey fog. To get rid of it, you need to match triplets of symbols in the tiles adjacent to the inclement weather. Once the fog's lifted, a piece of your binoculars appears at the top of the screen.

You need to clear a path for the binoculars, all the way to the glowing tiles at the bottom of the grid. Once you've done that, you move onto the next level, and the next piece of the binocular puzzle.

Azkend 2 - The World Beneath follows a similar pattern throughout. After you've collected your binoculars and a compass you're dragged into the belly of the earth by a terrifying maelstrom, whereupon you have to push onwards back to civilisation.

Every level you're collecting the pieces of an item you need in order to progress. Sometimes you have to make chains of matches on all of the tiles in a board before the item appears, while at other times you have to clear raging fire before it burns your notes.

Ice and locked tiles impede your work, but every item you discover gives you a useful power-up. Once you've got the binoculars, matching three or more of the binocular symbol will clear some lone tiles from the grid, whereas the hammer will smash out important tiles to get you closer to your goal.

Each scene is punctuated by a hidden object stage, which lets you build up your lightning power for the next round. Lightning builds up in play every time you match pieces that move you forwards. Once you have five charges, it bursts out and clears tiles for you.

The game looks absolutely gorgeous - the backdrops in particular are remarkably impressive. A decent soundtrack and some good voice acting finishes off a package that screams high quality.

Unfortunately, the game is sometimes let down by a lack of puzzling nous. Levels often get stuck in uninteresting stalemates, and too often the game shuffles your symbols when you've run out of moves to perform.

Azkend 2 - The World Beneath is an engaging game, and when its puzzling is done well it's a perfect balance of taut action and quick fire choices. Throw in a reasonably diverting story, and you're left with a decent package, albeit one that's not quite as classic as it would like to be. 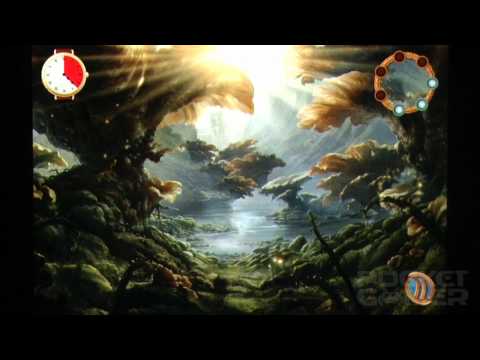 An entertaining and enjoyable match-three puzzler with an interesting story woven around its parts, Azkend 2 - The World Beneath is sometimes let down by poor design, but it's still well worth checking out
Next Up :
UFO99 review - "A fun little arcade game on the go"