Assault Android Cactus has been knocking around for a while. It first cropped up on PC in 2015, and has slowly crept onto other platforms over the years.

It's now the Switch's turn, and developer Witch Beam has pulled out all the stops for the new edition - and expanded version of the game known simply as Assault Android Cactus+.

This is, without a doubt, one of the finest bullet hell shmups you will ever play. It's fast and intense, offering up fresh ideas for the formula, all while being accessible enough that anyone can play it. And that's no mean feat.

Assault Android Cactus+ follows Cactus, an Assault-class android (hey!) cop who crashes onto a freighter in space that's currently in the midst of a robot uprising. 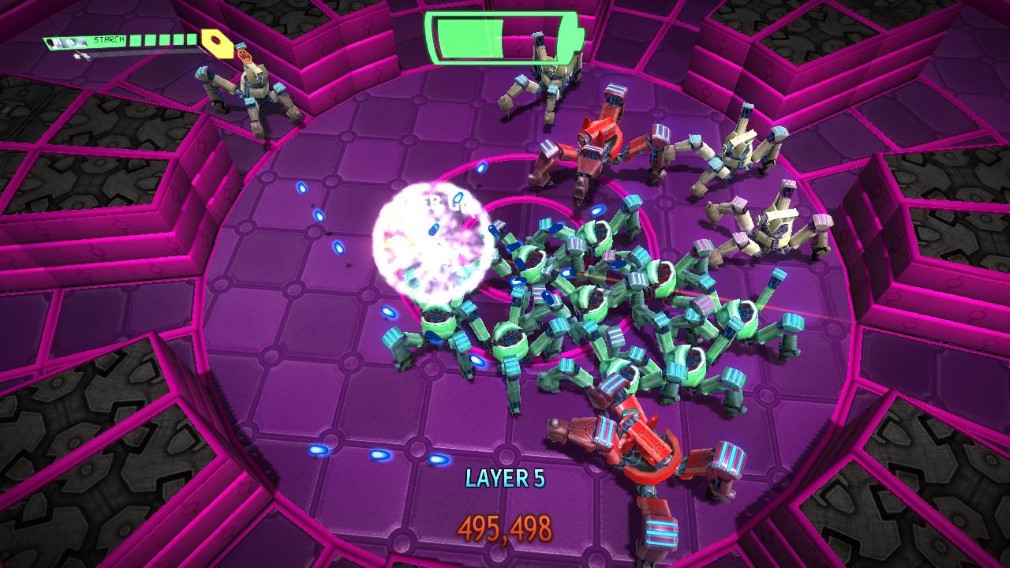 Your job is to kill everything in sight across a series of tantalisingly short levels, taking down enormous, tricky bosses as you go on your quest of destruction, ultimately freeing the ship and its few remaining androids from the new robot overlords.

The controls are super simple. You run around with the left stick, aim with the right stick, hold down R or ZR to shoot, and you can swap between your primary and secondary weapon with L or ZL. That's it.

You have a few different characters to choose from, each with a wildly different loadout that has various advantages and disadvantages, giving you the chance to play in the exact way you enjoy.

Cactus is the most basic character, with an assault rifle as her primary and a flamethrower as her secondary. Other characters opt for shotguns, railguns, lasers, and plenty of other weapons of minor destruction.

Pick an android and a level to tackle and you're off into bullet hell heaven. Seemingly endless processions of enemies come from every corner, and you need to run around, keeping that trigger finger down as much as you can to stop from getting killed.

This is pretty familiar territory for shmups, but Assault Android Cactus+ throws in some of its own kinks - particularly in terms of health.

Instead of the classic "one shot and you're dead", you can instead take a bit of damage before you end up getting knocked down. But that's not the end of the level - hammer the fire button for a bit and you're back on your feet, albeit with your gun level back to 1 and your score reduced by 10%.

The only way to truly Game Over is for the constantly-decreasing battery at the top of the screen to run out. Enemies sometimes drop battery pickups to keep you topped up, so you need to keep an eye out for those as well as incoming bullets and robot parts.

It makes the game far more accessible for players who aren't used to the genre, and you'll never feel completely overwhelmed when you can no longer see the stage for robots.

And by god is it fun. Assault Android Cactus+ never lets up the action, constantly flinging more and more enemies at you, morphing the level mid-battle, giving you more power-ups as you go along, and never letting you take a break to even die. 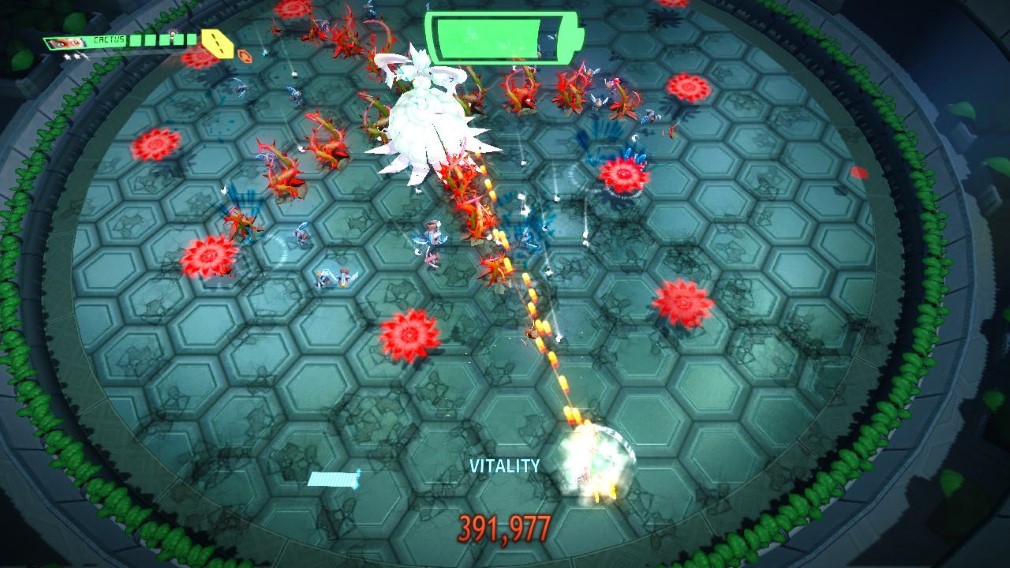 There are only 25 levels to blast your way through, and if you're in a rush to see the Campaign+ mode - a remix of the original Campaign which makes every level even harder - you can simply go straight to the boss battles in each world to reach the end of the story even faster.

On top of all that, you've got an endless mode to keep your trigger finger happy long after the Campaign is over, and a daily challenge to encourage you to keep coming back and take on something new.

And, perhaps most importantly, it's as smooth as butter. Despite the overwhelming number of enemies on screen, the Switch handles it like a champ, keeping the action at a smooth framerate even in handheld mode.

In short, Assault Android Cactus+ is one of the best twin-stick shooters money can buy. It's simple and friendly enough that anyone can play it, but full of challenges that will satisfy the more hardcore crowd.

It throws hundreds of enemies at you, never once slowing down the framerate to accommodate them, and provides tons of content to make sure your trigger finger never gets too itchy.

If you like bullet hell shooters, you absolutely need to get Assault Android Cactus+. And even if you don't, this is a fantastic entry point to the genre. You simply must try it.

Assault Android Cactus+ is one of the best shmups ever made, and you'd be a fool not to buy it right now
Next Up :
Valiant Hearts: Coming Home Netflix review: "A touching war story from various angles"