Okay so you're in Assassin's Creed Rebellion, powering up heroes, but wait, something's amiss. The missions are really tough.

Yeah, Assassin's Creed Rebellion doesn't go easy on players. Unless you're ready to master the game with the strongest heroes, it can be tough to progress through.

Here we have the tips you need in order to get through the game, so take these to heart and get the most powerful heroes in the game. 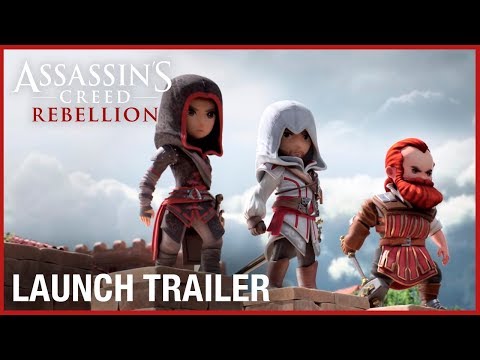 The first and most obvious way to power up your heroes is through the training room, which you will unlock early on.

In exchange for a cash cost and codex entries, you can have your heroes train away at a dummy and level up pretty rapidly.

Of course this is limited by how many codex entries you have, which means I recommend using this on newer characters you really want to use but are too low level to begin with.

Heroes don't come with just their bare fists you know, they need weapons and equipment in order to reach their full potential.

But before you do that, you will need to craft yourself new rooms at your HQ in order to craft weapons and armour.

Each hero can equip a weapon, armour and an accessory, though you'll need both rooms to craft those and the necessary materials before you can create any of them.

Eventually you'll collect enough DNA for your heroes that you could create an all new hero - um, if you didn't own them already.

Once you do, you can promote your heroes. You'll need a ceremony room and some cash to do this, but they'll rank up and become more powerful than before.

Need more DNA for your heroes? Well you can click the find DNA button for specific heroes, but in general, our next tip will help…

There aren't just story missions in Assassin's Creed Rebellion, there's Standard, Loot and DNA quests in each region you unlock.

These quests will give you various rewards, in addition to DNA of course, and you will naturally be able to three star each quest.

This means you can gather enough three star quests in order to get rewards for region completion on each region you go to. There's no reason why not to.

0/4
Next Up :
Lineage2M best class and races explained