Cat-astrophe Games has announced the official mobile release of The Unholy Society, bringing the quirky experience of the 2D point-and-click game to mobile devices across the globe. Inspired by 80s and 90s pop culture, the adventures of exorcist Bonaventura Horowitz take players on a journey through malevolent forces and demonic monsters on your quest to save the world.

With its tongue-in-cheek humor and its not-so-angelic protagonist, The Unholy Society offers a unique look into exorcisms with challenging puzzles and a comic book aesthetic. Players will travel through different locales, talk to shady characters, and explore different ways to exorcise demons. 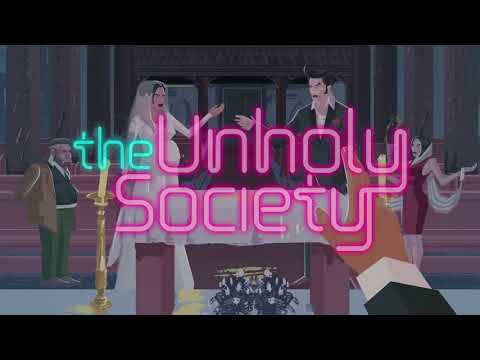 What gives the game a unique flavour is the character of the exorcist himself, tasked to rid the world of monsters by decree of the Vatican. But while you’d normally think of a man of the cloth as a holy man, Horowitz is really anything but. The teaser trailer above itself shows him performing different acts of “service” for the good of Christianity but in a completely ironic and humorous way.

Still, don’t let the colourful graphics fool you - the horror aspect of the game is still very much present, as you'll see from the demons that'll come at you when it's time to exorcise them. Thankfully, the immersive storyline, interesting side-characters, and sarcasm galore will keep your focus away from the monsters ready to jump at your screen. You’ll also have the Pope on speed dial, and who wouldn’t want that?

Fans of hidden object games and point-and-click adventures will find something new and entertaining with the first act of The Unholy Society, now available for purchase for $4.99 on Google Play and on the App Store.

Want to play similar titles on your phone? Why not take a look at our list of the top 25 best point-and-click adventure games on iPhone and iPad (iOS)?