An inviting, yet challenging game of mystery, available for iOS and Android

Relumine is the visually beautiful, 3D spatial puzzle game from developer Ammil, where you take on the role of Relu, an adventurous little girl who is searching for her lost father. Assisted by a glowing spirit guide, Relu discovers the power of rotation from a magic crystal, helping her solve the puzzles she comes up against whilst navigating her way through the abandoned mines of an ancient lost society. If the premise of the game has already hooked you with its charming narrative, then you’ll want to read on to find out exactly why you should give this spectacular puzzler a try.

With a minimalist visual approach, Relumine helps immerse its player into its world of childlike wonder and whimsy, while the meditative soundtrack soothes like a lullaby, backed up with atmospheric sound effects which add to the mysterious nature of this enchanting world. One which you will want to continue to explore as it unfolds in front of you, dazzling and stirring your imagination.

Each level in Relumine is unique, with a story told through the beautiful environments which place you right into the mind of Relu, as you see the world through her eyes. You also don’t have to worry about the hassles of time constraints or pressures as you can play the game and solve its puzzles in your own time. The mystical environments are easily navigated with simple controls; all that is required is to rotate your view to solve each of its puzzles before reaching the journey’s conclusion. After which you will want to return straight back to the beginning and start all over again.

By stepping into Relumine, you’ll be embarking on a journey through a world filled with cool blue flowing waterfalls and strange and wondrous characters that will materialize, as if by magic, to help guide you on your quest. You’ll find yourself levitating using platforms among a forest of giant shadows, and journeying to a world of ice. But you have to be careful, for Relu is not the only one travelling through these mysterious mines! For every step you take you should know that a dark force is closing in, as you’re followed closely by an ominous figure that's just waiting to engulf you in its shadow.

In Relumine, there are no dark dank dungeons or gruelling battles to worry about, just entrancing locations steeped with atmosphere and creativity. All you will need is your brainpower in order to solve the game's spatial logic puzzles which are presented using clever and unique rotation gameplay mechanics.

On solving these puzzles you will move from one level to the next, collecting treasure map fragments along the way to help you build up a picture and aid you in your quest to find Relu's missing papa. 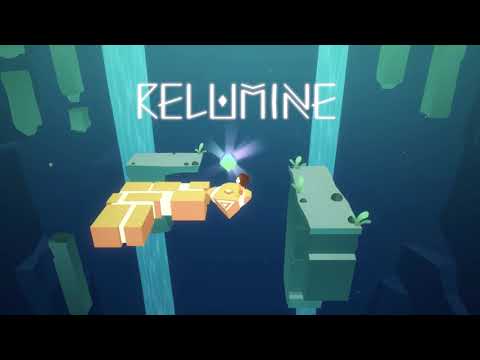 With a stirring narrative that makes for a memorable, enjoyable and truly magical game play experience, Relumine offers its player's a casual, easy to navigate game playing experience, with clean, beautiful visuals, which at the same time has challenging and satisfying gameplay, rich in its creativity. Relumine is an inviting game that is easy to play and utterly enchanting in its otherworldliness, helping its player to escape into a soothing world of puzzle's and fun.

Relumine is available to download now on the App Store and on Google Play for a one-off purchase of $1.99.