The Wales Interactive think tank seems to be on fire because we have another full-motion video game that has washed on our shores, literally! The producers of acclaimed games like Five Dates and The Complex, now bring us, Bloodshore, a fine new addition to their portfolio of narrative-driven stories and interactive movies in the form of FMV games.

Bloodshore is like Fortnite or PUBG suddenly brought to life. Yes, it's exactly what you think it is. Bloodshore follows the story of a real battle royale, featuring high-profile streamers, entertainers, and death row inmates, all fighting to be the last one standing. And it's all televised for viewers to enjoy in the form of a show called Kill/Stream. 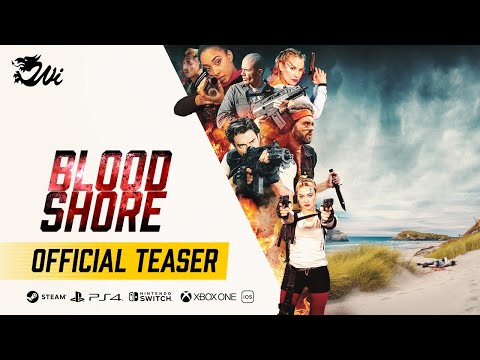 You play as Nick, a washed-up actor who wants that big, big cheque so that he can turn his life around. He’s competing alongside others on Kill/Stream because the final prize is life-changing. But there must be something bigger at play here, right? Why else would you want to pit high profile people against one another and kill them off until only one survives?

Well, it seems that Nick begins to discover the sinister plot behind this battle royale and the island they find themselves on. Things come to light as there is a reason for all this madness.

Bloodshore is PACKED with over 8 hours of FMV footage, a record by Wales Interactive themselves. There is so much to do, and so many choices to make. Every playthrough you will discover new things that will cause extreme consequences for Nick and the rest of the people on the island. The game has been co-developed by Wayout Pictures, Good Gate Media, Posterity Entertainment and Wales Interactive and it promises to be an FMV experience like no other.

Bloodshore arrives in November for iOS devices, alongside PC and consoles.

Check out these simulation games to play while you wait for Bloodshore!