Pearl Abyss Corp. has just announced the arrival of a new character class into Black Desert Mobile - the powerful Mystic class. Along with the new update, tons of in-game rewards are up for grabs for players who level up their new Mystic class - plus, cool goodies when defeating the new world boss, Khan.

Black Desert Mobile’s female Mystic class is a no-holds-barred brawler who can give any opponent a beatdown using her bare fists. She can deal devastating damage with precise and powerful strikes, especially with her main weapon Cestus and her sub-weapon Vambrace. Her ability to combine speed and power (all executed through beautifully animated moves) makes her a true force to be reckoned with on the battlefield. 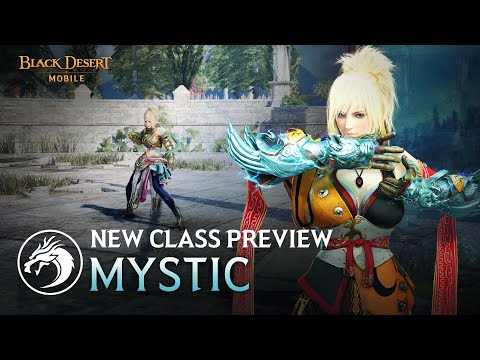 For instance, her Dragon Punch skill lets her deliver a concentrated blow to any foe, while her Dragon's Breath skill lets her summon the Blue Dragon to slow down surrounding opponents and deal damage at the same time. To welcome her into the Black Desert Mobile family, the game is giving out special rewards to Adventurers who will be able to upgrade their Mystic to level 70. Cool in-game goodies include Mystic’s Desert Camouflage outfit, a level 60 Character Generator Coupon, a Tier-5 Pet, 1000 Black Pearls, and an abyssal accessory chest.

To top it all off, a new world boss named Khan, Master of the Ocean, is now available for players to challenge. Slaying the new world boss rewards Adventurers with prizes like Khan's Scale, Tear of the Goddess, Cannons, and Iron Bow Frame.

Black Desert Mobile is a free-to-play MMORPG available to download on the App Store and on Google Play with in-app purchases. If you’re eager for a sneak peek of the new character class, you can check out the embedded YouTube trailer above to see Mystic in action.

Want more MMOs? Check out our list of the top 28 best mobile multiplayer games for Android phones and tablets!

Disney Wonderful Worlds, the match-3 puzzler, will release on Android and iOS next month