As the battle of Three Kingdoms rages on, each warring faction is receiving new reinforcements today with the four new playable heroes that are available until Saturday.

This update for Dynasty Scrolls introduces the Mythic Class, which is a brand new class bringing a bonus extra skill on top of the existing hero skills. Each of the four new characters that have arrived in the update have an Aptitude cap that is brought to a higher level than the other heroes, allowing a serious competitive advantage over the usual hero picks.

The four new characters are Cao Jie of the Wei faction, Zhuge Guo of the Shu faction, Sun Luban of the Wu faction, and Lu Lingqi of the Warlord faction. Each of them have their own special attacks and attributes which are highlighted in this trailer below. 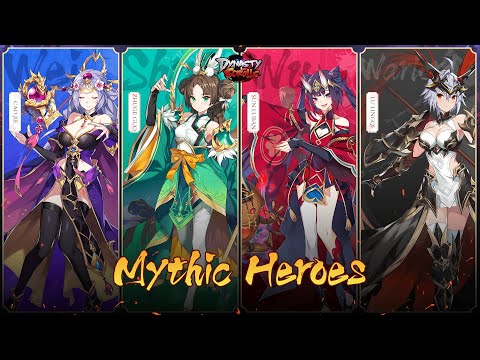 If you’re unaware of what Dynasty Scrolls is, it’s a role-playing mobile game for iOS and Android, set in the Three Kingdoms period of ancient China. You play as a young general alongside other historical figures to become a force of change in the ancient dynasty. A team effort of over a hundred artists, the game features beautiful character design and strategic gameplay utilising an endless array of skills and synergy combinations.

Dynasty Scrolls is available now to download from the iOS App Store and the Google Play for Android store, where it is a free to play game with in-app purchases.

If you are a fan of mobile action games, and wish to find out about more you can play on your iPhone or iPad, be sure to read our list naming some of the best on iOS.