Indie games developer Nader Tawil has launched their physics puzzler Bungee Turtle on mobile. The game is now available as free to play for iOS and Android devices.

As the title implies, in Bungee Turtle you play as turtles who can bungee jump. You join Bantu and Banta on their epic journey to collect as many coins as possible and unlock more playable turtles.

This is done using a bungee rope to navigate the levels, which Tawil assures that this game is the only mobile game on the stores which features a realistic physics-based bungee mechanic.

In each stage you must eat all the fruit and vegetables to set new high scores and climb the leaderboards, but you must also be wary of hazards like spikes, falling rocks and enemies who can fly and bungee as you can.

Altogether there are 44 levels spread across two worlds and two seasons, providing a large amount of variety in level design and pacing, with each level containing treasure chambers, many enemies, collectibles and power ups. 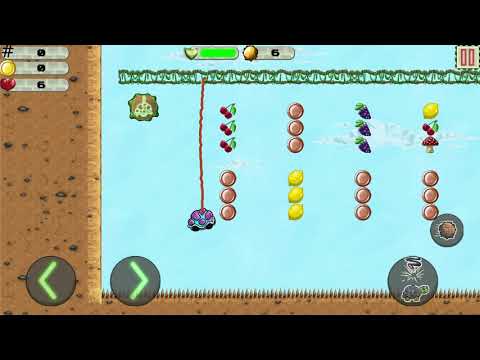 Here's a trailer for Bungee Turtle. As you can see, there are multiple turtle skins to be unlocked by collecting the coins allowing you to unlock these new skins. Altogether there are 27 skins to obtain and this provides a reason for you to go back and try to beat a level with as many coins as possible.

You can download Bungee Turtle now from the iOS App Store or the Google Play for Android store, where it is a free to play title containing adverts and in-app purchases.

Do you enjoy playing puzzle games on your Android phone or tablet? If you do, you should read our list of some of the best ones you can get on Google Play.