6 decks that you can use

I have been playing Legends of Runeterra ever since its release, and I was honestly surprised because I've never really been a big fan of card games before. Of course, I've played other popular titles from Riot, such as Wild Rift, Teamfight Tactics and LoL, but the way this one really immerses you in the game is unique and really, really awesome.

Having the ability to play very specific cards and spells from each region, players can get a better understanding of Runeterra and what it really means to live in one of these places. In the Shadow Isles, you're surrounded by death and fog whilst in Demacia, you see a lot of physical damage (since they're quite anti-magic as a region, to say the least). This list could go on, but you're not here to listen to my Runeterra knowledge, but instead to take a look at some of the best Legends of Runeterra decks.

Below I've compiled a list of Legends of Runeterra decks, together with all the cards, cost and what it actually means to play them. Some of them are more beginner-friendly, while others require a little bit more game knowledge and time. Of course, I've also added a couple of decks from the latest expansion, Empires of the Ascended.

So, feel free to choose from my selection of Legends of Runeterra decks, or import them all and give them a shot in-game! If you're a new player, try to stick to the more beginner-friendly decks, because they don't require as much stalling and are less prone to getting burst down in one round.

Want more guides and news about the game? Make sure you check out our collection of Legends of Runeterra articles!

Want more? Check out our growing collection of Legends of Runeterra articles! 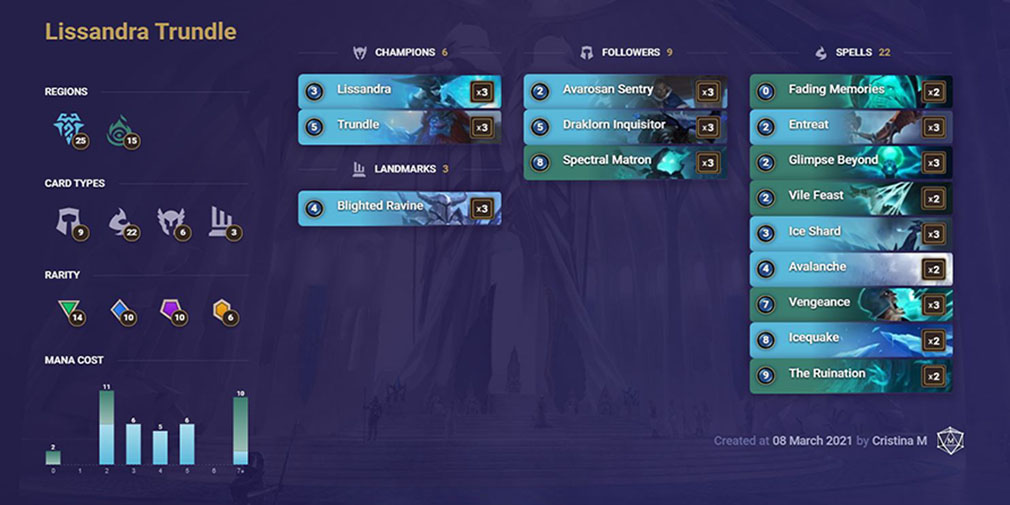 This deck has a great added benefit from the Blighted Ravine addition, as well as Ice Shard. Although it will take a few games to get used to the play style, it will be extremely rewarding and powerful, because in the end-game there is little to nothing an opponent can do to counter it.

The main idea behind this deck, according to Peach Puff, is to try and level up Lissandra ASAP. Once you get the Watcher in your hand, you will then follow up with the Spectral Matron. Alternatively, you could also replace the Spectral Matron with Commander Ledros for some extra Nexus Damage, but either way it's just a lot of damage for the opponent to deal with. You could also take them both together and give up a few spell cards. 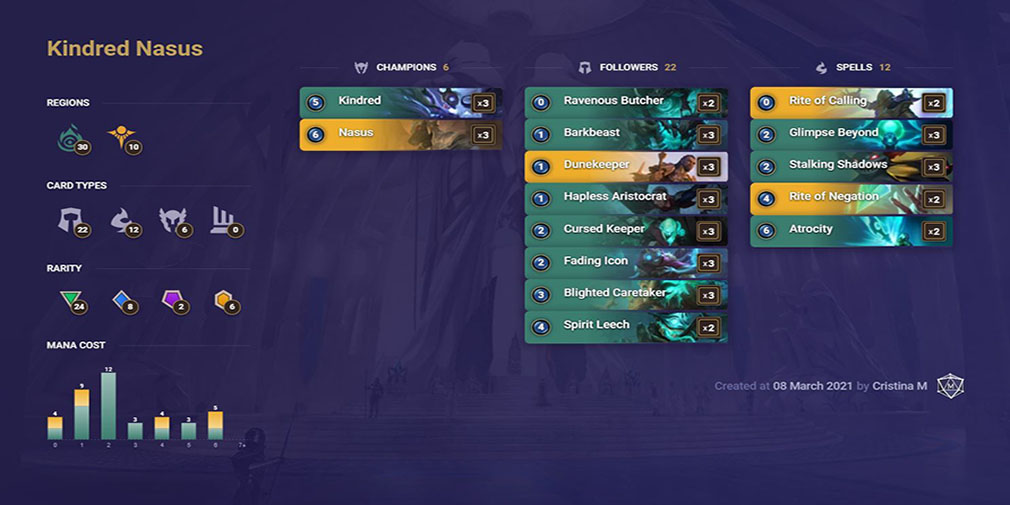 Stacks and Marks is what this deck is all about. If you know about Nasus in League of Legends, then you know what he's most famous for - stacking. With this deck, Nasus is able to well... stack each time you kill an opponent, as long as he's on your board. As long as Nasus stacks and Kindred kills marked targets, you will be able to level up both champions fairly quick and, when you reach a certain power spike, you can use Atrocity with a very fat and well-stacked Nasus.

With some of the Shadow Isles cards you will also have quite a big power spike early on, especially if you go for the Cursed Keeper -> Ravenous Butcher -> Barkbeast.

If you want more Followers, you could also go for 3x Warden's Prey and 3x Mask Mother and 1x The Etherfiend instead of Spells like Crumble, Vengeance, Vile Feast and Black Spear. Of course, this is an alternative, so you can try them both if you have the Shards (or the cards). 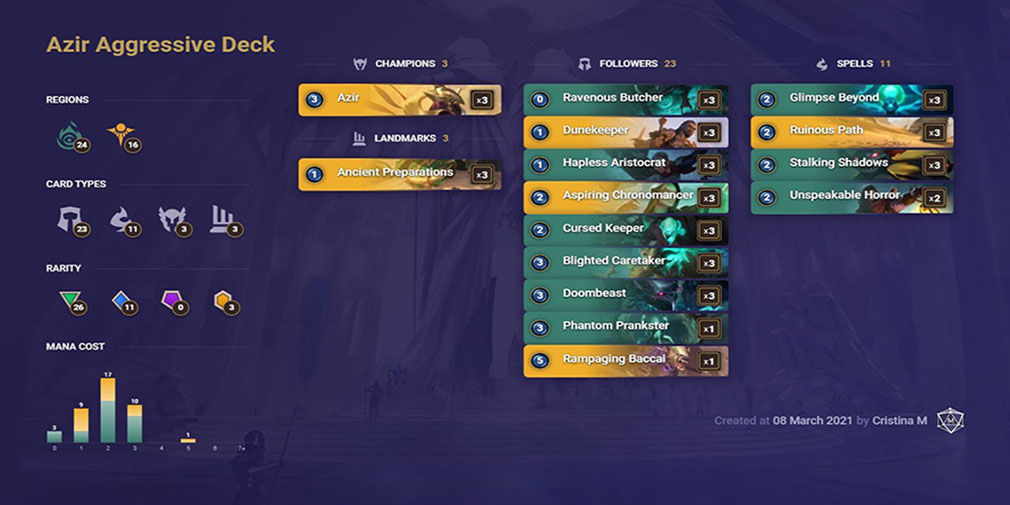 This Azir aggressive deck has been made public by DES7RUCTO with a whopping 90% win rate, which made me naturally wonder - does it actually work that well? The answer came in fairly quickly; yes it does. If you've already become familiar with the newly added Predict mechanic, you can build this deck from scratch quite cheaply, and you will also be able to have tons of fun with it.

It is a little bit slow at start, but with a low average Mana cost, you'll be able to play all the cards you want in the mid game with a very high impact (and very little counter). 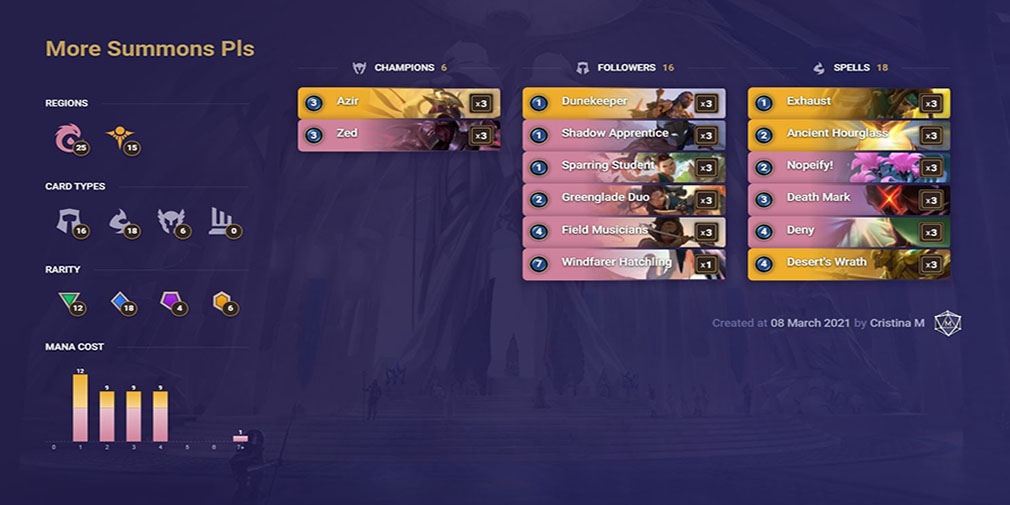 This deck is super cheap and fairly budget-friendly. With Azir's massively increasing army, you will get cheap units that get upgraded each time you summon more cards, but if you want to learn more about it, there is a complete video tutorial for it.

I've personally tried it, and it's super fun and I was surprised by how strong it can be early on, especially once Azir levels up (which will happen quite fast). Together with Zed, you will be able to summon even more units, and once you get to the later stages, the Windfarer Hatchling can bring complete obliteration.

I strongly suggest giving it a try if you want some free wins! 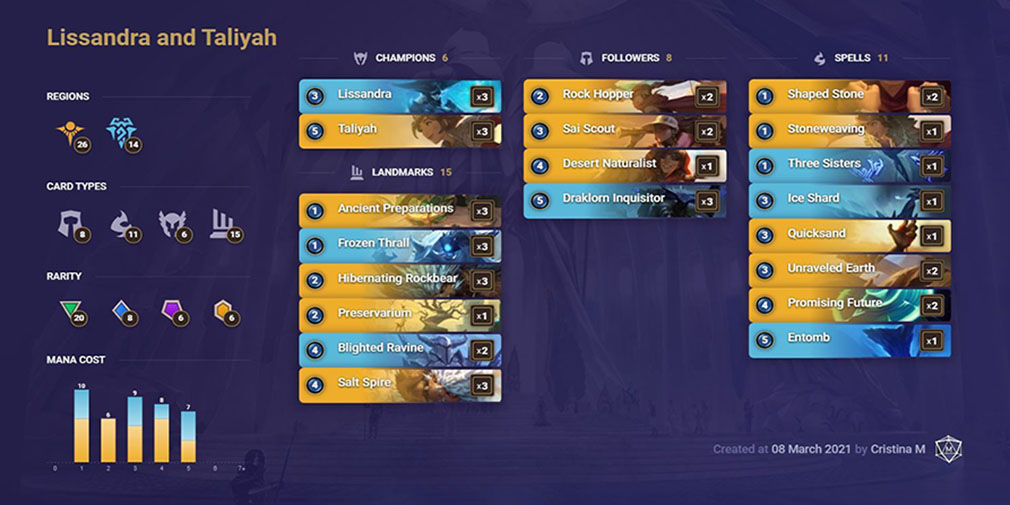 A deck that focuses on a lot of Landmarks can be fun if you know what you're doing. With Taliyah's ability to copy the Landmarks and Lissandra being able to summon them, you can pretty much obliterate opponents in the late game, by just stalling and focusing on getting your units strong.

Eventually, with a Watcher and enough passive stats accumulated on your units, you will be able to take down enemies in one go. The synergy between the two is just amazing, and it can be a complete disaster for an enemy that doesn't play their hand or deck correctly.

If you want more versatility, you could also go for The Howling Abyss and Ancient Hourglass. 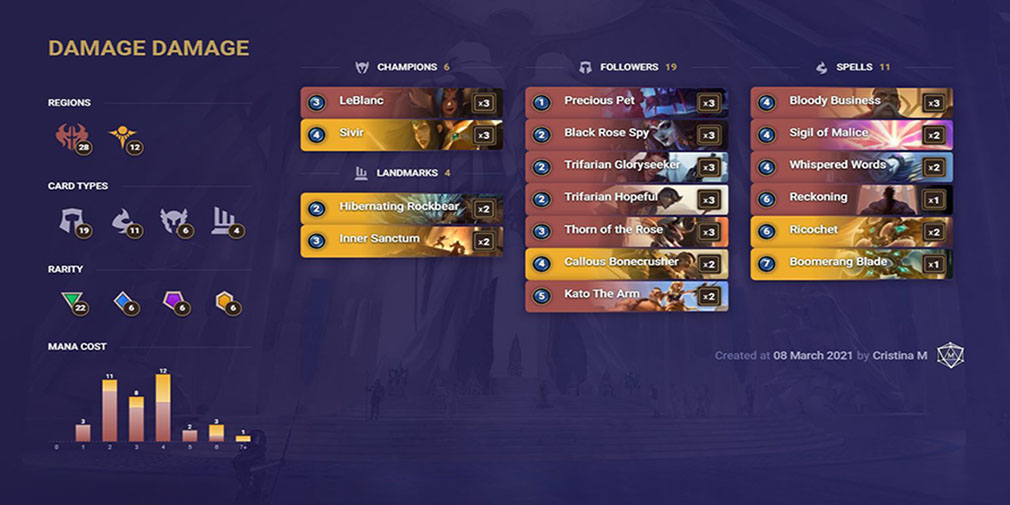 If damage is your game, then this is the deck for you. It's extremely straightforward, and it emphasizes damage and being aggressive over anything else (pretty much). Both Sivir and LeBlanc excel at that, and together with Bloody Business, they can burst down pretty much anything.

Reputation plays a key role in this deck, and with the ability to give Vulnerable to opponents, that's just... massacre (can nullify any unit). Have fun with it, and if you feel like you want even more action, you can take out the 2x Hibernating Rockbear and put 1x Decisive Maneuver and 1x Trifarian Assessor.