Combat is incredibly deep - here's what you should master as a new player.

Combat in Blade & Soul Revolution is much deeper than your typical MMO. Instead of simply activating skills and waiting for their cooldown timer to hit zero, you'll be trying to pull off elaborate combo attacks that require multiple skills triggered in a specific pattern. That's complex enough on its own, but throw in combo benefits, chi restoration, and various ways to dodge incoming attacks and you're looking at a surprisingly robust combat system.

Each of the above features is simple enough to learn on its own but pulling them all together in the heat of battle will take hours of practice. Here are a few tips to keep in mind while learning the ropes of Blade & Soul Revolution's combat system.

While much of combat stays the same across all five classes, it's important to realize that all characters play a bit differently. Some classes in Blade & Soul Revolution will rely heavily on dodging, as they're glass cannons that can only take a few hits. Others will be best played by forging straight ahead and absorbing every blow, dealing out your own damage along the way.

Once you've learned about your class' role in combat, spend time working on the aspects critical to its playstyle. If you're an agile class that can't take many hits, focus on dodging. If you're hoping to maximize DPS, focus on your Combo Attacks. As you get comfortable with one part of combat, then you're ready to move on to the next.

Chain Skills let you pull off devastating moves by using abilities in a specific order – similar to combos in Mortal Kombat or Tekken. Instead of simply activating all your skills when the cooldown timer has expired, you'll want to carefully plan out your moves before tapping on the skill wheel.

Learning Chain Skills is surprisingly easy, thanks to the Hongmoon Training Area. Here you can practice your skills in a low-stakes environment – you'll even get visual indicators telling you which skill to active next. Take your time to memorize a few Chain Skills during your first few hours with the game, as they'll give you a leg up on the competition and make challenging bosses surprisingly easy.

While Chain Skills give Blade & Soul Revolution's combat a sense of depth, combo benefits give it a sense of urgency. Each consecutive hit you land on an opponent will add to your current combo. Fail to strike an enemy for a few seconds, and your combo will reset.

There's a great reason to keep that combo streak going, as you'll earn powerful stat boosts the higher it climbs. For example, minor combos of 10 might boost your attack power by 1% – but manage to pull off 100 consecutive hits and that'll rise by a massive 5%. 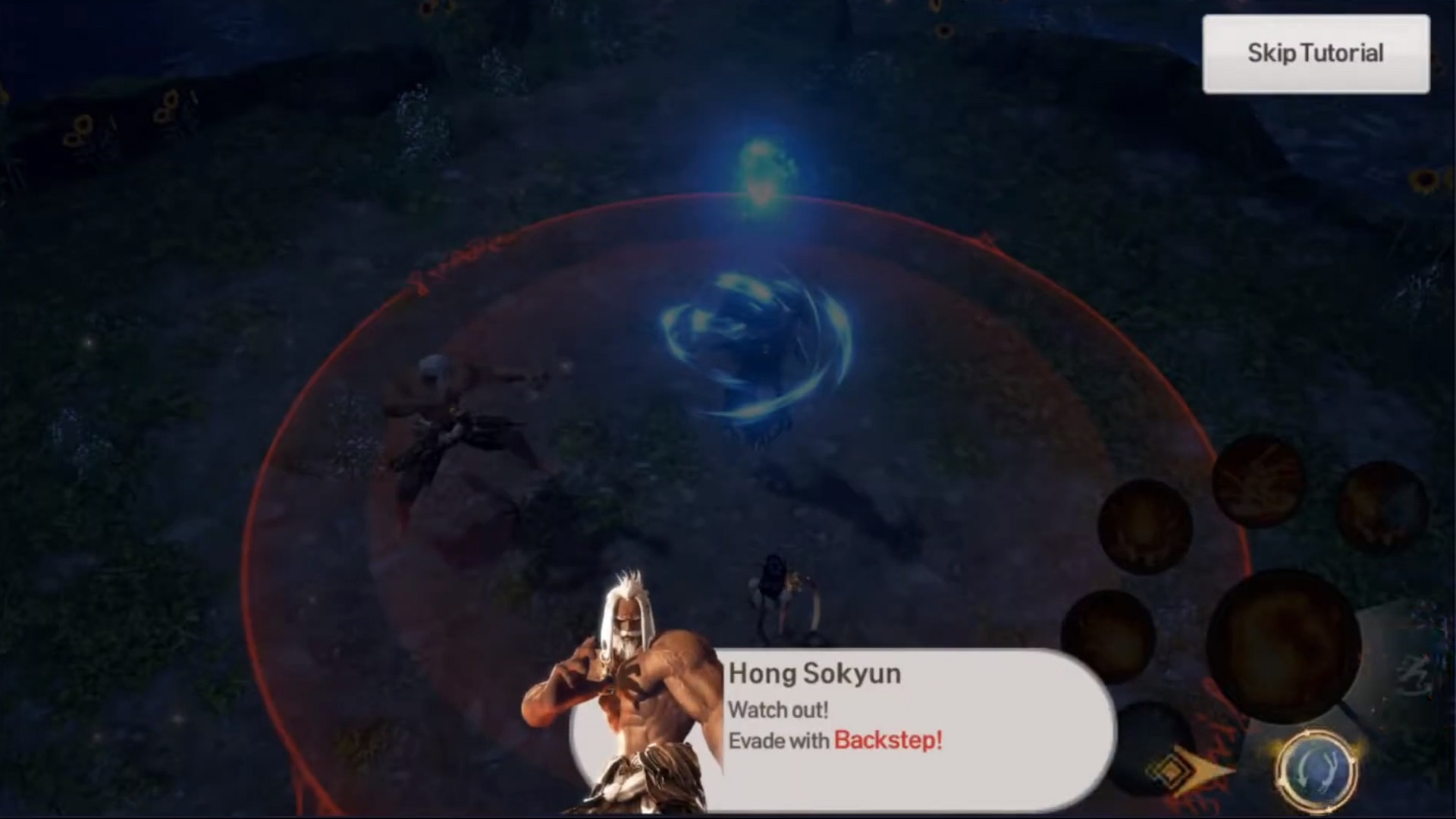 Avoiding attacks is more important in Blade & Soul Revolution than most mobile MMOs, as even basic enemies deal a significant amount of damage. Thankfully, the game gives you two ways to avoid incoming attacks – Backstep and Shadow Dance.

Backstep is exactly what it sounds like. Activate this move and you'll move backwards and away from your attacker. However, this also puts you out of range for melee attacks. Shadow Dance, on the other hand, moves you to an enemy's back, letting you continue your onslaught while simultaneously avoiding damage.

However, it's important to use these at the right time during combat. For example, Shadow Dance won't help you if your enemy is casting a spell with a circular area of effect. Meanwhile, Backstep isn't effective for long-range attacks with a narrow but lengthy target area. Strategies vary by the enemy, but it's often best for melee classes to use Shadow Dance before Backstep, and vice versa for ranged classes. This lets you stay at your preferred distance and continue dealing damage.

When your HP hits zero, the battle isn't over. Blade & Soul Revolution gives you a chance to restore your chi, letting you jump back into the action. The tutorial barely glances over this technique, but it's an incredible feature when used properly.

To restore your chi and get back into the battle, you'll first need to escape from the danger zone – typically indicated by a glowing red circle around your opponent. Once out of harm's way, select the Chi Restoration button, which will start the resurrection process. If you're not interrupted by an enemy's attack, you'll be right back in the game.

If you'd rather regroup and join the fight later, you can instead opt to respawn at a nearby safe zone. Still, it's almost always worth giving the battle another shot and taking the extra time to restore your chi.

Blade & Soul: Revolution will be heading for iOS and Android on March 4th