Following its initial launch back in November last year, YOOZOO Games' MMORPG Forsaken World: Gods and Demons has been updated to introduce new gameplay and endgame progression for players to get stuck into.

First up we have Treasure Hunts, a server-wide event that will see players competing to become one of the top 20 players in their region. Doing so will grant them access to the Temple of Kings where they can compete for the final Boss reward.

Before that, however, they will need to participate in the first phase of the event. This will see them choosing to spawn monsters at various difficulty levels based on their own power level. The aim is to achieve maximum ratings and rewards to qualify for the aforementioned second stage.

Next up is an event called Knight King Battlefield, which will be available to players who have reached level 125. It will be a limited-time event and open each day from 10:00 – 19:00 and then again between 21:30 – 23:30. During this time, adventurers will be able to do battle against players from other servers.

The team who nets the highest number of points will be given the victory before being assigned into one of two camps to take part in a 1v1 duel. The first part, meanwhile, will see up to 20 players looking to breach their opponent's defences and destroy their crystal tower. 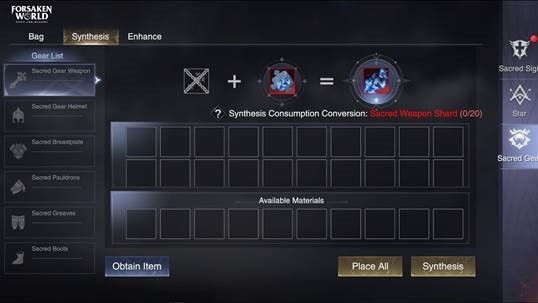 Finally, a new gear progression system has been introduced called Sacred Gear. This will allow players above level 170 to craft up to 10 holy outfits by using the related Sacred Gear Shards, which can be collected through in-game events.

Forsaken World: Gods and Demons is available now over on the App Store and Google Play. It's a free-to-play game with in-app purchases.