What are the Among Us pets?

As someone who has purchased Among Us pet packs herself, I quite enjoy them! Among Us is a game all of us seem to be playing. Whether you are hoping to be the impostor or just want to do all of your tasks for the good of the team, there is loads of fun to be had in the game. But, if you start to dive into the cosmetics of the game, you might be tempted by the pets that are featured there.

Are the Among Us pets useful?

They are cosmetics, who, unlike some myths out there, don’t take revenge on your death if an impostor comes. However, they do sit by your body and wait for it to be discovered, like a good, little friend. They also make your character stand out, give you someone to stand by you on these big spooky maps, and are just a generally fun aspect of the game.

I am going to be listing all of the different Among Us pets and what they are, for you to take a look at! I will be listing them starting with the best pet and ending with the... least good pet.

Squig is an interesting, alien-like creature that appears in the Bedcrab Pet Bundle, which is my favorite pet bundle, as it turns out. This character bobs back and forth slightly when standing next to you, which is pretty cool. I really enjoy the mystery behind this alien, as even the developers are said to not know what it is!

The other pet inside the Bedcrab Pet Bundle, the bedcrab is a brown bug with three paws sticking off of it. This pet takes inspiration from the headcrab in the Half-Life series and may also be a reference to the Crowbar fail in the Henry Stickmin game Stealing the Diamond, however, I love the bedcrab because when I first started watching Among Us animations, the bedcrab was always there, as the player chased after it, becoming a good friend. You can watch the video I fell in love with below. 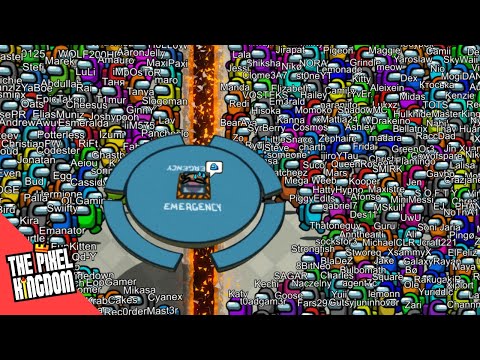 The Mini Crewmate from the Mini Crewmate bundle ranks highly in this list as well! The Mini Crewmate is the only Among Us pet to change color based on the player’s color, as it strives to match the bigger version of itself. Even impostors can have a Mini Crewmate, which is a fun idea, as that would mean that this crewmate is hanging out with a baddie. These crewmates do just look like small versions of regular players, which is very cute.

Note: The Mini Crewmate Bundle comes with a hat too!

Among Us pets - UFO

The UFO from the Brainslug Among Us Pet Bundle is a cute little alien spaceship, which would be inside of a spaceship. That concept is pretty funny to me. I quite like the animations on this ship, as it bobs when idle, hovers right with the player when running, but also showcases the emotions of being scared by shaking and flashing red and being sad by sitting and pulsing blue. One of our favourite Among Us pets!

The alien dog from the Hamster Pet Bundle may sound like a normal Among Us pet, as it’s got the name Dog, but it’s not. It’s got a waggy tail, but only one massive eye and is bright blue. This dog has a meep tongue, sticking out of its mouth, to make it quite cute. It also leaps when running, trebles when scared, and sits on the grown with its paws under its head when sad.

The Brainslug from the Brainslug Bundle looks like a goopy green alien, also with one eye! This slug jiggles when idle, floats after the player while its lower half rotates around like some sort of flying machine when running, and leans backwards with a big building eye when scared. It has a really sad, sad phase - looking at the ground. This slug is a reference to the Brain Slug in Futurama. We love that it was included as one of the Among Us pets.

The Hamster from the Hamster Pet Bundle does look more like a real-life hamster! It is a simple brown hamster inside a light blue, semi-translucent ball. You can see the hamster well enough, though it does not have complex animations. When sad, it does look back and forth while the ball stays still.

The Robot can be found in the Mini Crewmate Bundle and it is a cute little robot indeed, as it’s rumored to be based on WALL-E. When idle it sometimes moves its head up and down. While running that head bobbles a bit, and when scared this robot shakes while its eyes flash red and yellow. When sad and defeated it bunches up into a big square.

Henry is a stickman figure from the game Henry Stickmin, which looks like a basic stick figure, and can be found in the Stickmin Pet Bundle. When idle, he scratches his head, when running he has a running animation, when scared he shivers and touches his face and he can cry when sad. It’s a basic stick figure, and to me, does not stand up when there are mini crewmates on offer!

Ellie is also from the Stickmin Pet Bundle, and looks like a female stick person, as she has big red hair. She is based on Ellie Rose, also from the Henry Stickmin series. When idle, she scratches her chin, when running she runs, when scared she points at the player and when sad she lies on the floor. Again, she just doesn’t compare to other Among Us pets, like baby mini crewmates.

The Glitch Pet is only available in the PC version of Among Us, as this was a promotion during the Twitch Rivals 2020 event. It’s a pet awarded to players who watched at least 30 minutes on Twitch during the event, on a participating live channel or by watching one minute of The Game Awards 2020 on the official Twitch Channel. The pet looks like a Twitch icon and has no animations.

How do I get Among Us pets??

Among Us Pets come in bundles on the various platforms the game is on, costing $2.99 for each bundle on mobile. As the game doesn’t support cross-platform play, purchasing a bundle on mobile won’t appear on your PC. These items are strictly cosmetic, so they won’t be helping you in the game. To purchase and equip pets in Among Us, you just need to go to the computer in the lobby of the ship and select the pets tab. From there, you can purchase bundles or tap the ones you won to see them appear with your character.

Want more? Check out our 13 other Among Us tips, guides and walkthroughs!