App Army Assemble: Bridge Constructor: The Walking Dead - How does the latest entry in the popular puzzle series compare to its predecessors?

Bridge Constructor: The Walking Dead is the latest entry in the popular puzzler series. Following the success of the Portal collaboration, this time around they've teamed up with popular TV show The Walking Dead. We decided to hand the game over to our App Army to see if their survival skills were up to scratch.

I have played the previous "Bridge Construction" games, and I was expecting a lot from this new "episode". I am glad to say that they totally met my expectations! The game is (of course) about building bridges, but most importantly it is about survival. Whether it is to kill zombies by destroying a bridge, or let your people cross it safely, BC: TWD is a unique gem. More than in other chapters of the saga, there is more trial-and-error involved here. The difficulty increases as you progress through the game, but it is not too frustrating. Totally recommended!

The crossover between Bridge Constructor and TWD works really well, but it can't reach the levels of creative energy that Bridge Constructor: Portal did. The bridge, traps and jump construction translated nicely into the Zombie filled universe of TWD with some special abilities of the hero characters we know and love. The only downside in my opinion is the storytelling and the visual looks of the characters. All in all a solid 7/10! 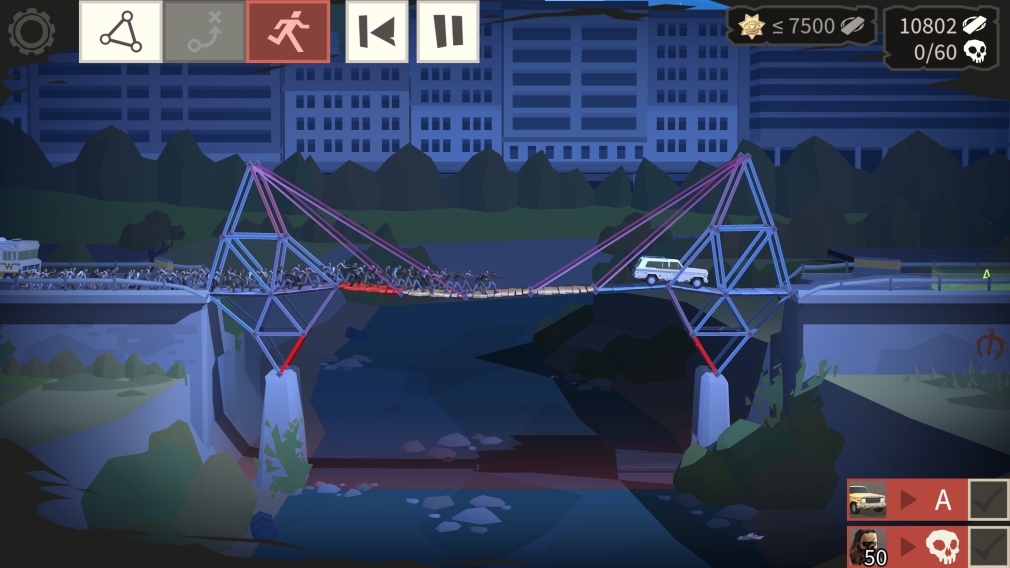 Bridge Constructor: The Walking Dead is a really cool mashup of the popular app with AMC’s hit zombie show. I love the concept for this game, it really works well for this style of puzzler that incorporates finding ways to eliminate the undead walkers, for the safety of the remaining survivors. You do this by moving around level objects that can create constructs for you to reach safety and can also create deadly traps for the undead hordes.

The game looks good and the sounds fit the overall tone, but the gameplay quickly becomes quite challenging. There’s a basic tutorial early on, but the difficulty really starts to ramp up. I was happy to see Bridge Constructor paired up with The Walking Dead and I still feel this will appeal to fans of both genres, but the trial and error nature of many levels becomes quite tedious. I do think those with patience for this type of puzzler will find a lot to enjoy here, especially if you like a real challenge.

I’m actually not a Walking Dead fan, and I’ve only played one bridge constructor game, and that was just for a few minutes. So I’m not part of the target audience here. But I like the problem-solving aspect of the bridge construction and making it all come together to smash or otherwise wipe out the walkers. The waypoint and movement managing of multiple characters I found a bit more challenging (just not my cup of tea) but the creative bridge-building was fun. As for the character dialogue, apparently, it’s well-done in keeping with characters from the show, so fans ought to like that. Downsides are a couple of bugs or features that could be improved.

You have to drop things occasionally right where your finger is, except that it’s difficult to see them... because they’re under your finger. And a couple of times I found that the only way I could go back was to close the app and reopen it. That will likely get fixed quickly but it’s not cool to run into early in a premium game. The music was okay but repetitive and I turned it off. Overall this is a game that looks good and is challenging but ramps up the difficulty and frustration early. Doesn’t mean it’s not worth picking up. I’m not a huge fan of the genre and I liked it, so odds are fans will definitely want to pick it up. 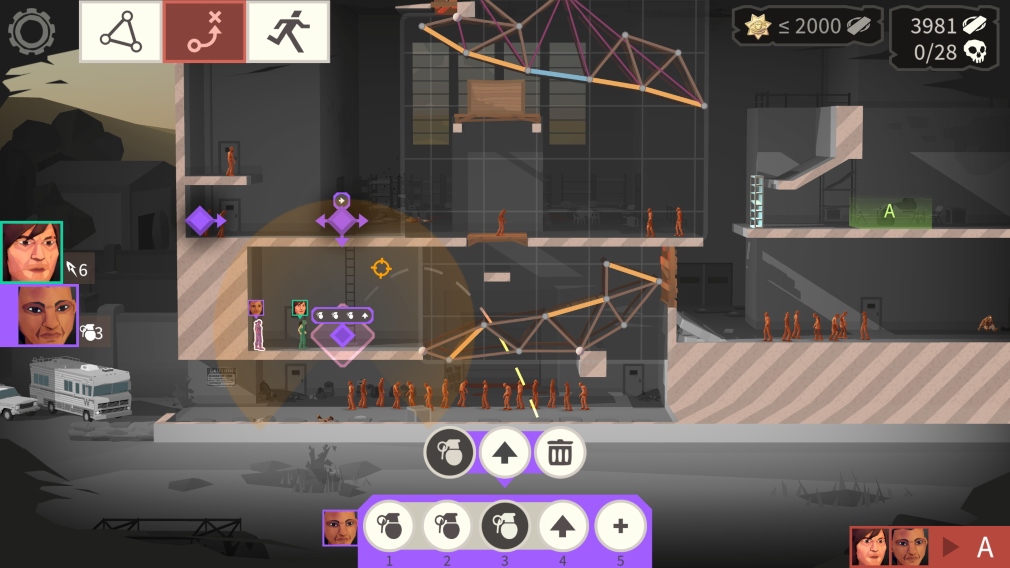 I’m a big fan of the bridge builder genre, with my last experience being with the excellent ‘When Ski Lifts Go Wrong’. This is very similar in terms of taking the basic bridge-building mechanics and adding a few new gameplay elements. However, I’m not sure if I have finally had enough of the genre or just didn’t enjoy the micromanagement of the characters.

Either way, the relaxing trial and error experience I usually find was often replaced with frustration. I would still recommend this to fans of the TV show and/or bridge building puzzlers, the presentation and general feel of the game were excellent. Maybe lockdown has removed my tolerance and patience? Maybe I found it too much like trying to plan this week's trip to Aldi amongst the masked shuffling hoards? Nice game, overdone genre, wasn’t a fan of the new mechanics.

This is a great game. It has bridge construction, zombie avoiding, provision gathering and best of all, your favourite characters from The Walking Dead. The bridge construction was great fun and I tried to see which bizarre designs I could create that would carry weight.

The instructions were clear and easy to follow, the background music I switched off because it was repetitive and added nothing to the enjoyment of the game, and although there were no voiceovers, the prose was good. I especially enjoyed Eugene and his unmistakable quirky way of stringing a sentence together. This game has replay appeal in more ways than one and if you love a good puzzler with a great theme running through it, then I don’t think you’d be disappointed - I certainly wasn’t.

So about this game, it is quite good and plays smoothly on my Android device. It's a bridge constructor mixed with survival. I'm a fan of TWD comics and TV series, so seeing some of the TWD characters in-game is a plus for me. When it comes to level difficulty, some levels looked like it is impossible to solve, so you will need some extra time to play it over and over again (good thing I love playing puzzle games).

I also encountered a bug where the bridge doesn't collide with a pillar or something and locking my device while the game is open, will make the commands bug out after unlocking it. But it's fine, I know that devs will fix it in the next few updates.

It is not just a bridge constructor game, you will also need to make something explode, kill zombies and shoot some exploding barrels and stuff. There are also some levels where you will command 2-3 survivors at the same and right time and a level(s) where you don't even have to build a bridge to finish it.

It also has a storyline where you will meet some survivors, which is good (except for Eugene's long scientific lines, which is acceptable because that's who he is in the series). Game graphics are good too (for me at least?), it has a cel shade-y art style similar to the TWD game series. I know it's not everyone's cup of tea. But for me, I love this game. 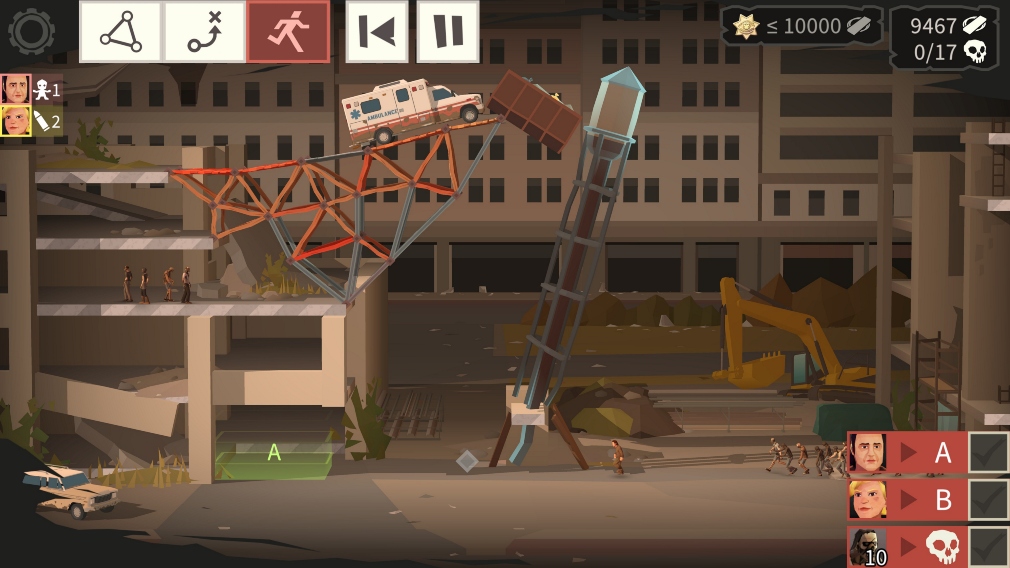 I played a few of these Bridge Constructor-type games before, so this should've been perfect for me - and in many ways it was. This is NOT just a bridge builder. This asks you to blow up zombies by building contraptions similar to the classic The Incredible Machine games. This asks you to "code" your survivors' moves to escape zombies. This asks you to do all three at the same time, while putting limits on your resources, too.

Needless to say, the difficulty hikes up quickly. And this is the major issue - there's very little handholding and a LOT of trial and error. The challenges are sometimes fun, and finally completing a devious level is exhilarating, but I doubt too many people will have the patience to get there.

Things get even worse because of the bugs. One of these is right at the beginning - I was about to throw in the towel at the... second tutorial level, where you're asked to drag a connection point onto a specific location. Problem is, zoom in doesn't work at that point, and your finger obscures the connection, and if you lift your finger from the screen in any other location but the intended one the game gets stuck. And you have to force close the game and start anew.

Another thing I hated was the writing. I get that each survivor needs his own personality, but they're all talking and talking and talking some more - if at least they were funny... - at some point I gave up on reading and just skipped on to the levels. Still, the puzzles are solid, so if you're more forgiving of trial and error than me, you might even love this game. 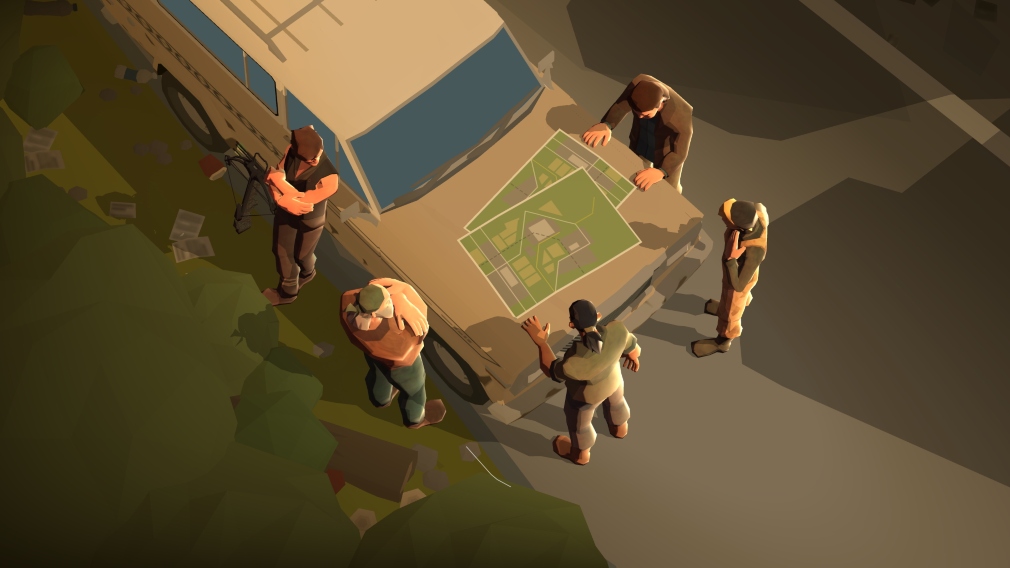 The music I had to pause and listen to hear how intense this game might get. It seriously sounds like the first time I watched the first episode of this excellent terrifying series. I went into the settings & I like the options so far with the volume & 60 fps. The colours fit the art perfectly. It really sets the mood for the action ahead.

The First Tree: A few things to keep in mind when playing this beautiful game