Kingdom of Heroes: Tactics War, NEOWIZ's Arthurian strategy game, is getting ready to celebrate Halloween with a brand new event alongside introducing a further two heroes to the game's ever-growing roster.

The first of those two new heroes is Aria, a 5-Star Wizard character who possesses powerful wide-ranging attacks that will deal continuous damage over time. She also has a special skill that will allow her to copy the enemy team's buffs and boost herself with them. You can check out a trailer for Aria and the other new Hero in the trailer below.

The second arrival is Calypso, a 5-Star Support hero. She has a skill that will increase the survivability of an allied Heroes with Leader Skills. Her healing prowess is somewhat lacking compared to other characters but her ability to reduce an enemy's attack will definitely prove useful. 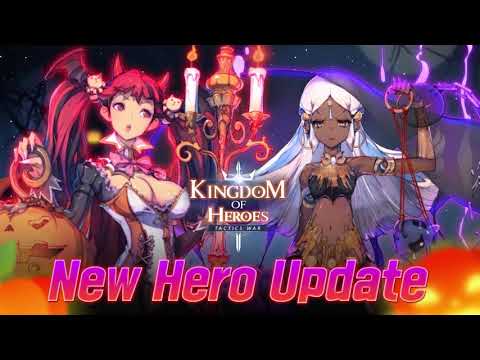 Players will also find a Halloween Event to dive into that will see them collecting candy by completing dungeons and battles. These sweet treats can then be exchanged for special event rewards. One of these prizes includes the aforementioned Calypso and Gabriel's new, Halloween-themed costume.

If you've not played Kingdom of Heroes: Tactics War before, it's a strategic RPG with gacha elements. Players will assemble a team of heroes, taking into account their different abilities before deploying them in a series of hex-based strategic battles. Our reviewer Jon Bitner found there's plenty to enjoy in the game and awarded it a Silver rating.

Searching for the best mobile RPGs around? Here are 25 of the absolute best for iPhone & iPad