Marvel Super War, NetEase's latest MOBA, has now reached season four. This will feature a series of in-game events that are inspired by Marvel's upcoming Black Widow movie. Alongside this, there will also be new characters and skins.

From the Season Four update, there will be six weeks of events including a giveaway that will net players a host of rewards including special avatars. Additionally, there will also be Marvel Studios' Black Widow inspired skins for Black Widow and a newly added character.

Given the theme of the Season, that character will be the villain of the upcoming film, Taskmaster, who is now available in-game. Taskmaster will possess the ability to copy the combat movement of other heroes which should make for some interesting plays.

Taskmaster isn't the only new character arriving in the MOBA either. The powerful mutant sorceress Magik will also make her debut. She will be a Fighter type hero and possess the ability to teleport across dimensions as well as being able to control the demonic forces of Limbo. 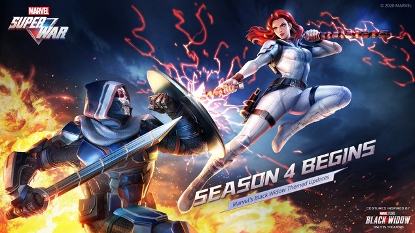 Finally, Hela and War Machine have received new skins in the Opposite Realm series. This will see Hela become the Goddess of Justice, a beacon of hope across the Ten Realms whilst War Machine will become Warbringer, who wants to cause death and destruction.

Marvel Super War is available now over on the App Store and Google Play. Currently, it's only available for folks living in South Korea, Japan, Australia, New Zealand, Thailand, the Philippines, Indonesia, Singapore, Malaysia, Hong Kong, Taiwan, Macao, and India. It's a free-to-play game with in-app purchases. There is still no word on whether or not the game will see a global release.

In search of some high-quality multiplayer games? Here are 25 of the very best for iPhone & iPad