Another week, another batch of Apple Arcade updates and announcements to discuss. This time around, we've only got a couple of updates to chat about, but to make up for this, we can also share some info on two of the service's upcoming releases.

You might have already heard that this week's new game is World's End Club, an intriguing action-adventure title from the minds behind Danganronpa and Zero Escape. It revolves around 12 elementary school students trapped in an underwater theme park. Also, there's a weird clown involved and some sort of Danganronpa-style murder game.

First off, we've got the two new updates to existing Apple Arcade releases.

LEGO Brawls' latest update introduces the land of Jurassic World and the all-new Isla Nublar setting. You'll now be able to team up with a T-Rex or Indominus Rex to explore the island, collect powerups, unlock new champion Owen Grady, and hunt down rare Jurassic World minifigs released every week. 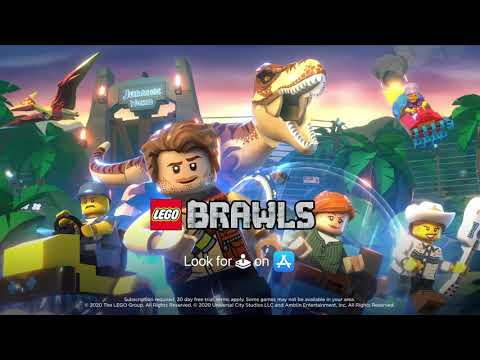 Lykke Studios' tint. has now received 10 new tricky levels to solve using your expert painting skills. New content has been added to the game's Zen mode, giving you ample opportunity to experiment with watercolour paints, and there are even some extra achievements to unlock along the way.

Now, let's focus on some of the service's upcoming games.

WayForward's Marble Knights is a sword-swinging fantasy game that sees you rolling into battle alongside the Knights of the Round to defend King Rolland and his Kingdom of Roundingham from the dastardly Lord Terrorball. It's clearly got a good sense of humour, not to mention plenty of foes to smite and puzzles to solve, and the fact that it can be played with three other players makes it all the more appealing. Noodlecake's Slash Quest! is an incoming adventure game featuring a talking sword that once belonged to a queen from a faraway land. It's your job to return the blade to its rightful owner by travelling across the land and learning how to wield this legendary weapon. You can expect to see 12 distinct levels packed with minigames, side quests, and major boss battles. And that's it for another week. Be sure to check in again next Friday to stay up to date on the latest additions to Apple Arcade.

Pinky the Hippo: In the Wild is a colourful educational game for iOS devices

Join us over on Twitch for LaunchPad #4's second stream right now!