Get off to a winning start with these beginner tips

It takes determination, smart investment and a little luck of the Irish to succeed in the world of racehorse breeding. And that’s true even in a simulator. Champion Horse Racing gives you the chance to breed, train and race your very own horses against rival players in the pursuit of glory. You can expect plenty of jockeying for the top spot and more than a few photo finishes.

So, before you open the stable doors, read this quick-fire beginner’s guide and gain the inside track. 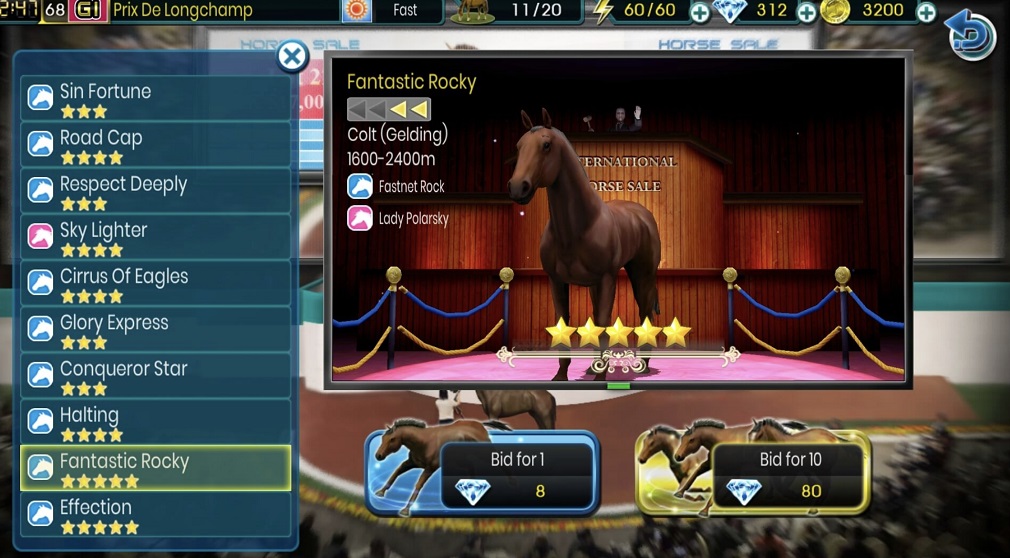 The basic flow of gameplay in Champion Horse Racing begins at the auction house and ends at the races. You can bid on a new stallion, gelding or broodmare using diamonds. Each horse up for grabs has a star rating, with number of stars indicating rarity and colour of stars indicating sex. Once you’ve got your horses, it’s over to the stud farm. Here you’ll be able to see their stats in detail, and select which of them to send on to the stable for training. 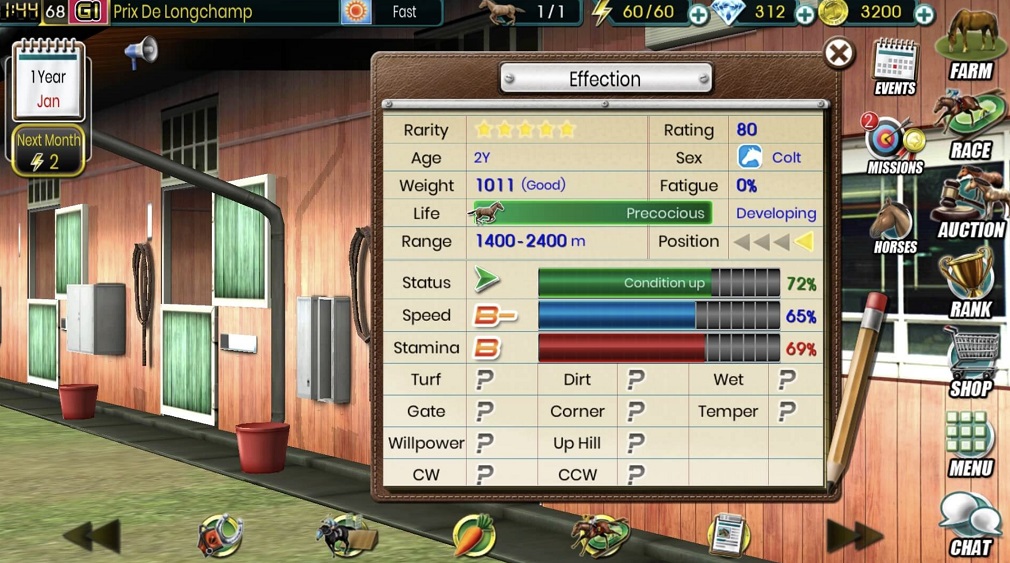 You’ll need to train each stable horse once a round — a round indicating an in-game month — and this is your chance to improve their condition, speed, stamina and more. Feeding aids your horse’s weight and endurance. Note that training consumes AP, and all horses in the stable will have aged by the end of the round. When a horse becomes too old to compete, you’ll have to retire it.

Kitting out your champions 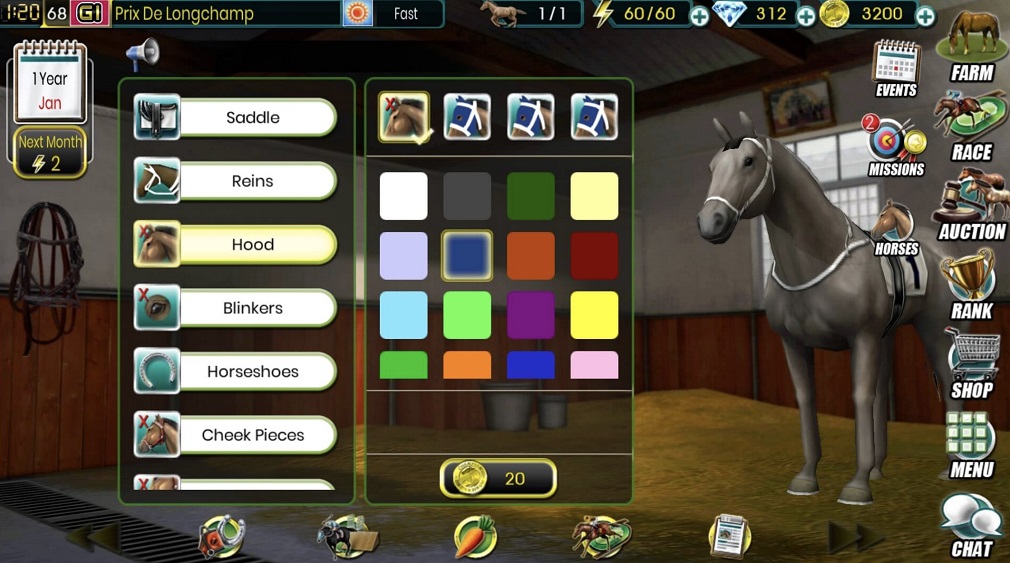 Alongside training, you can also improve your racehorses’ individual abilities with equestrian gear including saddles, horse shoes, reins, blinkers, hoods and more. This equipment can be bought using coins won in competition. 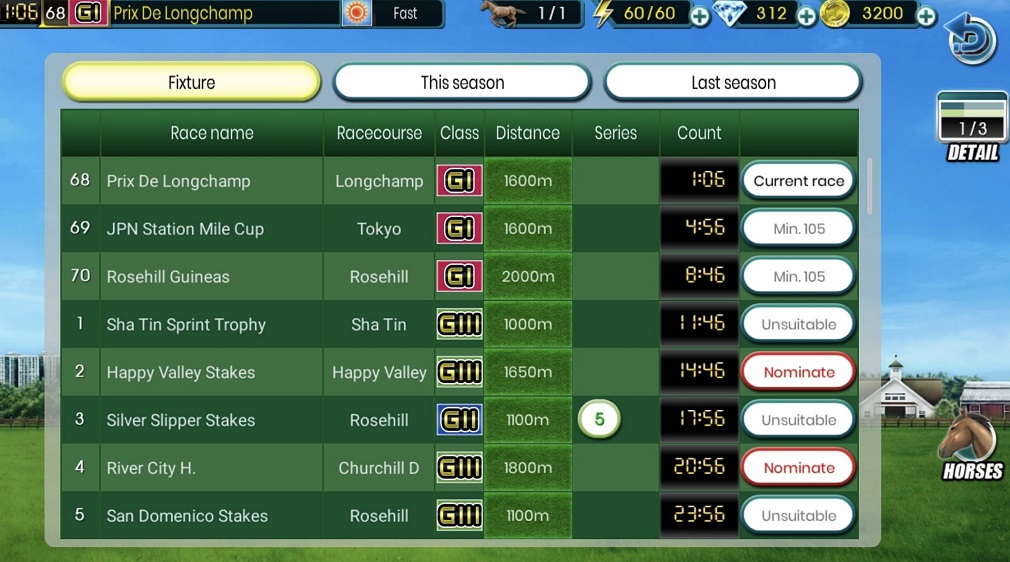 It’s time to put your horses to the test. There are two main race types in Champion Horse Racing: seasonal races, and regional races. These are further split into G1, G2 and G3 classes, based on the level of competitors. Seasonal races involve a higher level of competition, and you may send your best horses to compete with other players in real time matches. There are 70 races per season, and each unfolds in real-time. For races in which you aren’t competing, you can still spectate — and even place bets. 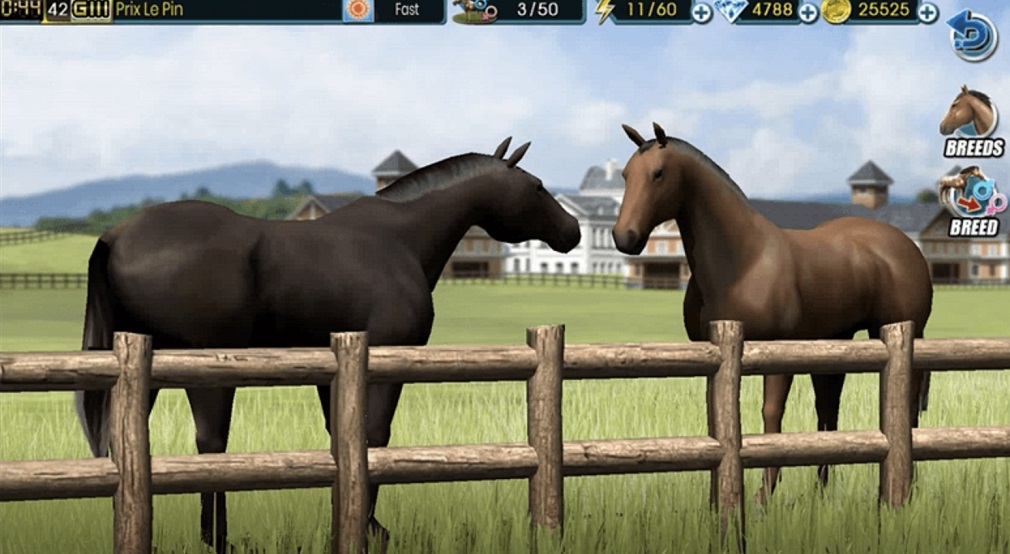 A champion breeder knows to ensure the next generation of foals comes from good stock. To breed, you’ll need diamonds to spend, a broodmare (fertile female), plus a stallion (fertile male) that has won at least one G1 race. Timing is everything. Both horses’ brood bars will need to reach 100% before you can send them to the stud farm to breed. You can achieve this by winning races, with higher level competitions filling up more of the meter. You’ll also need to wait for the breeding period, marked in pink on the calendar and comprising four in-game months. Once a pair has bred, you’ll have a new foal to add to your stable — after giving it a suitably racehorsey name, of course. 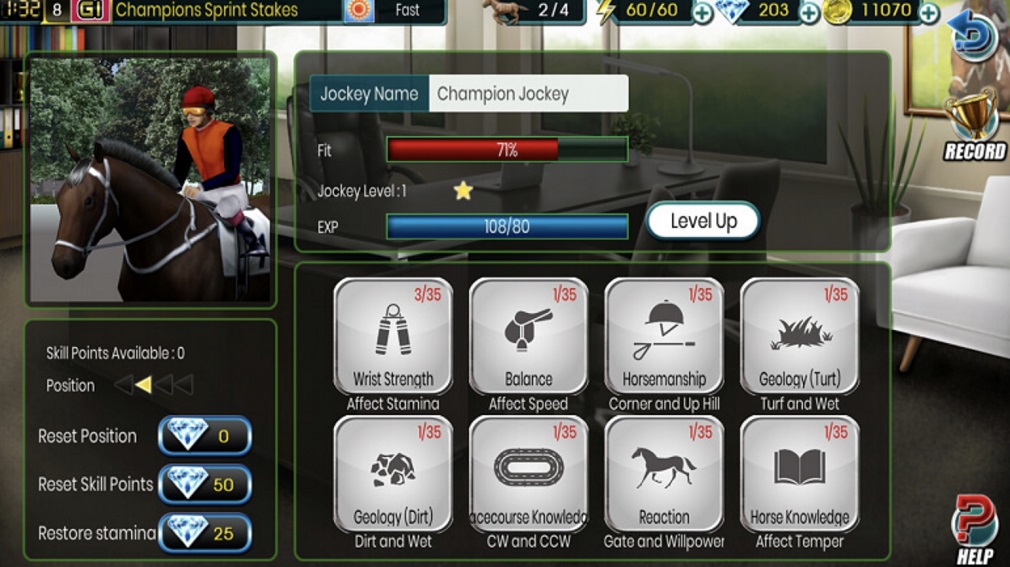 A champion racehorse needs a champion jockey on its back. Once you’ve won at least three G1 seasonal races, you can create and train new jockeys. Competing in races grants your jockeys experience points, which can be used to level up. Each time they level up, you’ll be awarded 3 skill points to spend; jockeys have eight skills to hone, from balance to horsemanship, all affecting their in-race performance.

Ready to muck in, train up and become a champion trainer? Download Champion Horse Racing for free on Android and iOS now.