This is one of the most legit snooker sims on mobile

WST Snooker Mobile takes official, legitimate snooker and brings it kicking and screaming onto mobile devices. If you've ever wanted a snooker game which is about as good as the minigame in Yakuza 0, but on mobile, well this is a good place to start.

Also, 51 Worldwide Classics. Y'know, the Nintendo Switch minigame collection. That has a pretty good game of pool on it. Not Snooker necessarily, I know, but I do wonder why we need this snooker game, other than the fact corporations demand another means to advertise through. 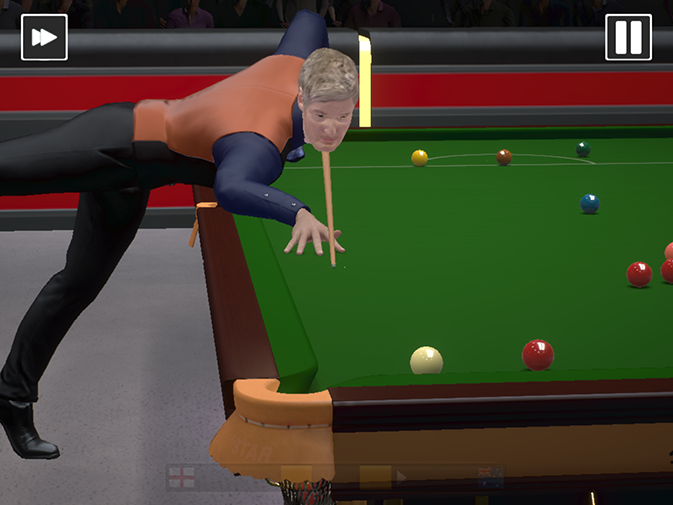 And for that, WST Snooker Mobile does a great job, you even get a big Betfred advertisement on the main screen. Which is just wonderful. I feel immersed in the realism. But then you see the 3D models of professional snooker players and, gosh, those are very bad.

Anyway, no matter how you feel about the pros, everyone loves snooker, and this game offers a surprisingly high level of granular control and skill that you might not be used to in games like this, so let's walk you through the details…

This is the most important part of your shot, right? Take a good look at the white predicted ball trail on the table, and you'll see the line become longer and thicker the more power you put into your ball.

But it's not all that easy. An overly powerful shot can also send you off course, not to mention lead you slamming into other balls, or perhaps even getting the white ball in the pocket.

To avoid this, fine tune your power and try not to overestimate the strength you need. But, that can be avoided with these details…

Once you've lined up your shot, it's time to work on some of the finer details. You can adjust the aim of your shot by a minuscule amount, ensuring you get the ball aimed exactly where you want.

If you've got a dead-on shot and you're facing the pocket, you probably won't have to worry about this too much, but if you're going for an oblique angle and you want to avoid the ball bouncing straight out of the pocket, then you want this to be accurate.

Again, if you're going for those oblique angles, you want to watch for too much strength more than anything.

Putting backspin on the ball can get you right out of those tricky situations, especially when you're facing the pocket. It's too easy to get the white ball to follow your other balls straight into the pocket, unfortunately.

What you need to do is adjust for backspin. Use the tiny white ball diagram on the screen, and then pinpoint where you want your cue to hit the ball. It's fairly simple, hitting it low will likely make the ball backspin away once it makes contact with another ball.

Hitting it high up, however, will give it a bit more spin and carry, better if you're aiming to get lucky with multiple balls in a trick shot.

Isn't this what snooker is really about, once you get past all of the geometry and physics? It's about getting lucky as hell, and celebrating afterwards. Which is why you shouldn't punish yourself for missing a shot, just try again and again.

The fact is, sometimes you'll mess up the break. Sometimes the ball will bounce and shoot straight out of the pocket you were aiming for. Sometimes you just might miss entirely.

Don't get mad at yourself, there's no shame in trying again. And if the CPU is messing with your head, it's totally acceptable to just quit and pick another opponent. I would.