Sphaze is an incredibly beautiful-looking puzzle game that the developers say draws influence from both Cut the Rope and Monument Valley. Definitely excellent games to take inspiration from but does it do enough to distinguish itself from other puzzles available on mobile? We sent our App Army in to find out.

I was a little disappointed with this game. The first few levels had me engaged but then it began to feel repetitive and instead of the levels giving me a challenge, they seemed to run into each other. The graphics were sharp but lacked variety in the background scenes, the music was monotonous and I turned it off but the mechanics were easy enough to follow.

There was an option to buy the solution to levels with robot parts if you couldn’t solve the puzzle, which was handy. However, I deliberately used up all the spare parts to see how much it was to replenish them and I needed 12 to solve the puzzle with 15 costing £4.99 (I could get 10 if I watched an ad). That’s when I stopped playing as I knew it would become impossible to play without spending serious money.

On the surface, it was a good puzzler but lacked anything special to keep me playing and the IAPs were definitely too costly.

Sphaze on iPhone 11 is a puzzle game where you guide a robot (or robots) to the goal by rotating circular tasks. While it starts out simple, they quickly throw in elements like red paths (kill you) and multiple robots. It’s a very fun puzzler with great presentation. Can get frustrating at times, though 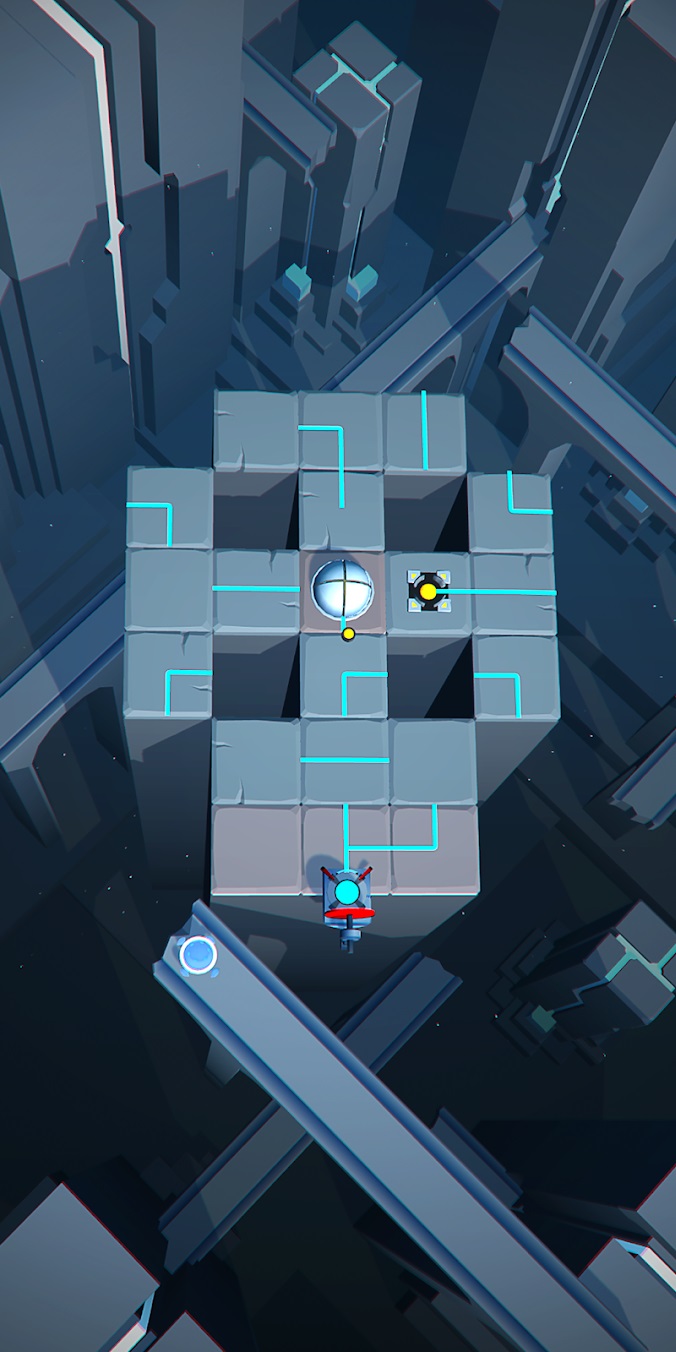 Sphaze is a puzzle game where the objective is very simple, take the sphere to the right place, the game starts with very simple challenges and becomes more difficult with the passing of levels. The game is very interesting, fluid, beautiful and easy to play and still has sound effects and music very well made, super recommended to play in the bank row or anywhere you need to wait for something to pass the time

SPHAZE has a very familiar feeling to a lot of other puzzlers out there. Turn dials to line up the relevant lines and send the little robot on its way. There are some more challenging concepts added as you go on as the robot will always turn right at every junction. Simple ideas like this can make it quite challenging. I didn’t often find myself with the urge to return to the game. It was pleasant whilst I played but it felt a little too slow-paced and too similar to other puzzlers to stand out for me

SPHAZE is a charming puzzler where you make a path for your little robot(s) by rotating parts of the scenery. Things start off simple but then it gets hard fast as items like switches, walls and different types of robots are thrown into the mix. Graphics and sound do the job. As you progress you can unlock screen options that can obscure the screen, the first I unlocked was film grain and I quickly switched it off as it looked terrible. I did find the hint system fairly useless so ended up avoiding using it. I liked the game and if you like puzzlers this is the game for you.

The game was ok to start but after a while I soon got bored. It felt like a go game at first but then it was simply a rotate the board until the robot reaches the endpoint. Graphics are nice but the gameplay didn’t hook me as much as I thought it would. I would say it’s ok but doesn’t reinvent the wheel. 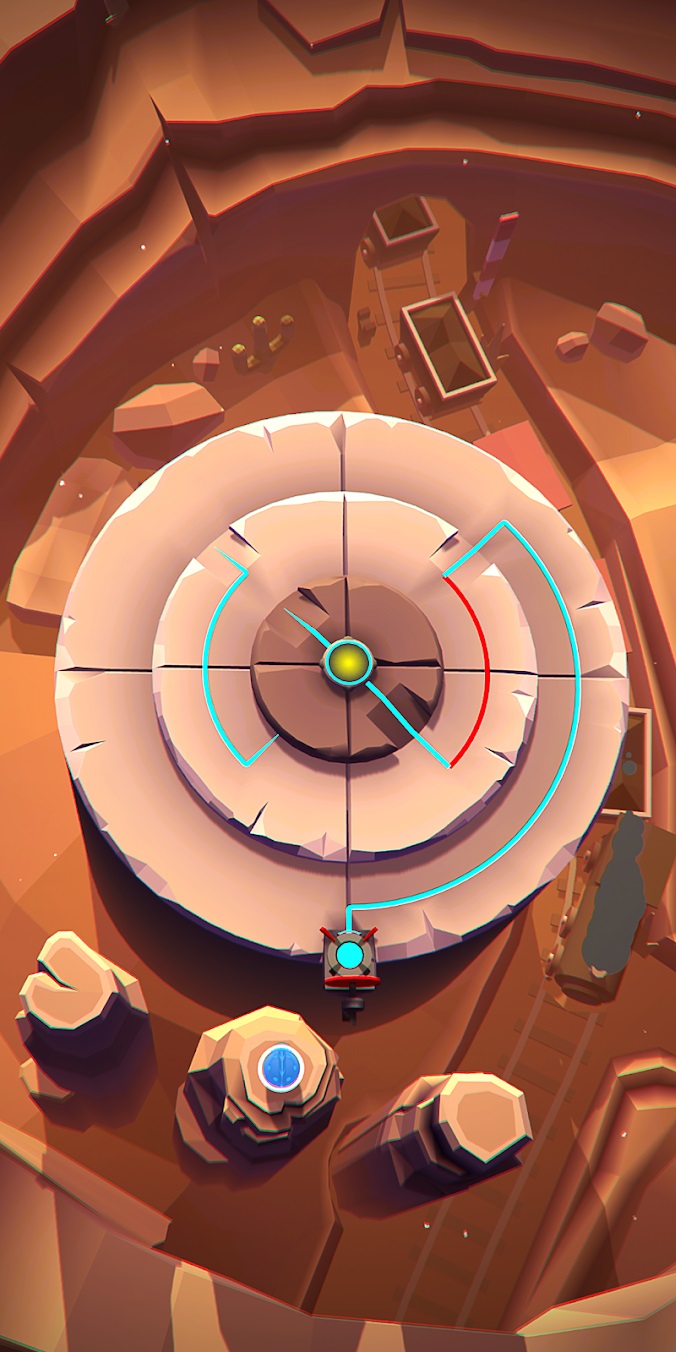 A premium game with up to £99.99 of IAP... Fortunately, these are not required to progress but the game design and balancing may have been influenced by this to some extent. In my experience, the lovely aesthetics of the game did not sufficiently compensate for the relatively dull gameplay. I found some levels pretty frustrating and had to push myself to keep returning to the game. To list such AAA titles in the game description I expected more from this, hopefully, it's not just a quick cash grab / mobile experiment to fund other work. If you are after a new puzzler I would recommend looking elsewhere before picking this one up.

I'll say it upfront, I am really bad at making decisions and adjustments on the spot. I know this is my problem, but it ultimately hindered me having fun while playing Sphaze. In this new puzzle game, you are tasked with transporting the orb-like mechanic creatures to the centre of the maze (Hello Westworld!). In order to do so, you need to rotate the dial and choose the best possible route in order to escape the red "death" zone and along the way activate the switches that open the portal in the middle.

I played through the whole 1st World (there are 4 of them in total) and to solve some of the puzzles you need to rotate the dial when you already put everything in motion. Another thing, there is no skip option for the puzzles, so when you get stuck, you get stuck for good. I really wanted to say that I was (un)phased by the game, but it turned out to be the other way around. I might recommend this game to die-hard puzzle fans in search of a fresh gaming fodder. For those who already have some games to complete, do not fret, you are not missing anything ground-breaking.

First disappointment related to this game occurred upon me finding out that it supports only devices with iOS 13 or later. This is somewhat strange, to say the least because considering the nature of the game I reckon it could run perfectly fine on my iPad Air like tons of other similar mobile games. When reviewing a game, I have a habit of visiting its dedicated page on the App Store and although the one for SPHAZE looks really solid, two things grabbed my attention and not in a good way.

Firstly, I detest any kind of in-app purchases in a paid game and while those found in SPHAZE are purely cosmetic, selling a pack of hints for a whopping sum of $99.99 is total overkill. Secondly, claiming to be behind such console juggernauts as Dying Light 2, Witcher 3 and Cyberpunk 2077 comes with the added level of responsibility, which sadly was not duly met (if at all) and here is why. Let me say straight away that SPHAZE is just another puzzler, which does not bring anything new to the table.

Guiding a robot to the centre of the ring all while rotating platforms and avoiding various traps is not really what one would expect from the creators of the most anticipated game of 2020 or perhaps, even ever. And whereas Monument Valley shocked the mobile gaming industry with its ultra-beautiful design and Cut the Rope with its innovative puzzles, SPHAZE looks and plays like another ordinary free-to-play game served under the guise of a dish from a Michelin-starred restaurant.

The graphics, detailed and colourful, and the rather precise controls did not disappoint me, the music is not very immersive, but entertaining. But if I really like puzzle games it is because I like to find a calm atmosphere conducive to concentration which creates relaxation, but the fact of playing against time (especially in the most difficult levels) contradicted the appeasement that I come to seek in this kind of games!

So I prefer to play this game during short sessions, and I did not really find what I am looking especially in a puzzle game; but for its careful realization and clever puzzles, I rather recommend it to players who are also looking for some reflexes and adrenaline in puzzle games.

When I saw the previews for Sphaze I added it to my wishlist and definitely wanted to give it a try. I won’t bore you with the game mechanics, the description says it all. It’s a fun little puzzler with quite a few obstacles causing havoc. There is a lot going on at one time, but you can slow things down if things get too hectic. The graphics are very good, solid controls, and overall cool experience.

I generally prefer more relaxing puzzlers but I still keep coming back to Sphaze for one more try. Solid recommendation if you like a good puzzle game, even if it gets a bit frustrating at times. I also like that the developer has already updated the game several times since it launched a couple of weeks ago. Warning: some of the puzzles are too over the top, trying to move things around with several balls in play seems too complicated for most. 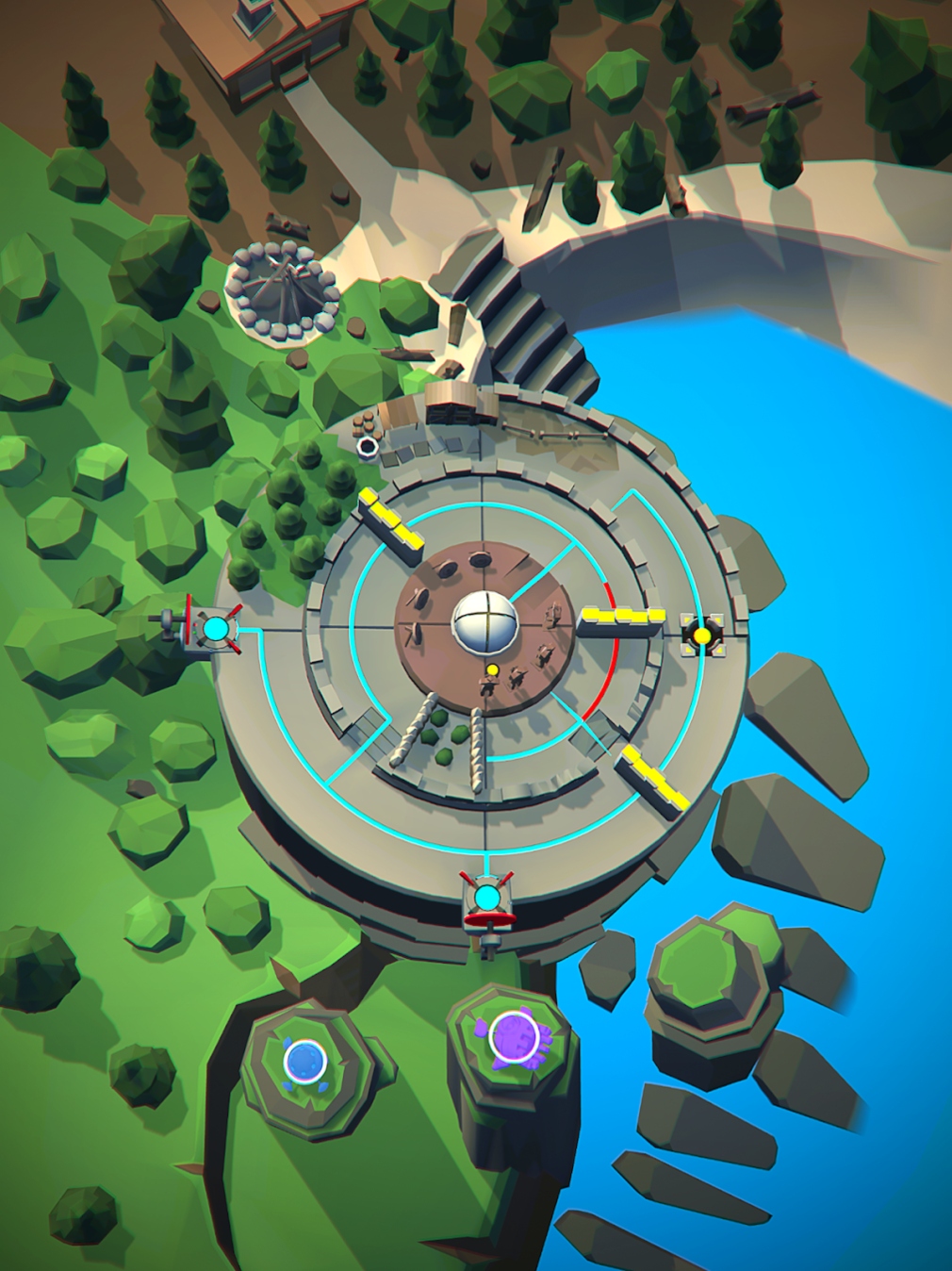 When I read the description of this, it made me think of some of the cool puzzles you find in the Returner games. They do look a bit like some of the puzzles in that great sci-fi adventure/puzzler. And Sphaze is described as taking place in sci-fi and fantasy worlds and the description mentions exploring hand-crafted worlds. Well, I guess you can make a case for that. The puzzles are strewn across some nice looking hand-drawn planets.

But I wouldn’t call it exploring. As for the puzzles, I enjoyed the first few levels, but by the time I’d finished the first world, I’d gotten bored. With a few variations and obstacles, most of these play basically the same. Start your robot at the right point, and rotate and reposition the track (sometimes, a bit tricky, as your robot is moving) so that it makes it to the centre and in some cases, opens up the gate to get in. There is an interesting feature where you can test a route before you play, but that doesn’t redeem this for me. And if you can’t figure the puzzle out, you can buy the solution with the in-game currency of spare parts.

I like this option in puzzle games because otherwise you can run into a frustration wall and give it up. But the inevitable prompt to find some way to earn those spare parts is tiring and puts me off. Just one more game asking me to watch videos in order to progress. And I’m sorry, but the journey is too repetitive and lacking in-depth for me to care too much about going very far with it. If you’re really into puzzles- and the artwork here is attractive and the idea innovative, you might enjoy this. But for me, I’ve already played a better and more interesting version. In an actual sci-fi environment.

Which class should you use in the new mobile MMO, V4?