Rishing Sushi is an arcade title from independent developer Ivan Alcaide. The game initially released for iOS and Android late last month but has recently been updated to include an improved tutorial alongside adjustments to the UI and various bug fixes.

It looks to blend precarious tower stacking and taking food orders style gameplay with a big crane to carry out the job. It's a simple case of picking up pieces of sushi with the aforementioned claw crane and building a big tower with them. 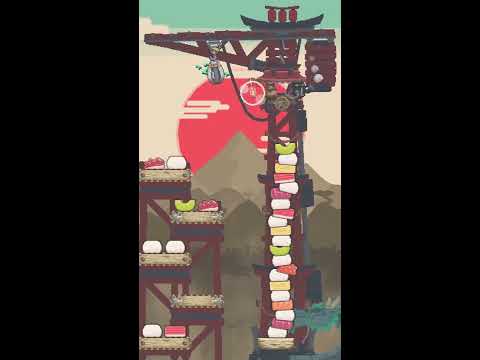 Occasionally, orders will pop up on the screen and players will have to remember them, gather those pieces and add them to the growing tower. Getting the order correct will net the player additional points but the pieces will remain in the tower, it will just be pushed further down the screen.

Arranging them in the correct sequence will not only earn the player some bonus score but it will also let them use the sushi cannon. This will fire a plethora of sushi pieces onto the tower which will push it further down the screen, which helps keep it in the safe zone. As the name implies, that's where you'll want it to be for as long as possible to rack up a higher score.

The orders will start off very basic, with only a few food items required. However, as you progress further, the orders will become larger, meaning a good memory will definitely help in this game. The controls promise to be precise and simple, only requiring one or two touches to operate the crane.

Rising Sushi is available now over on the App Store and Google Play. It's a premium game that costs $2.99.

Like your games to be filled to the brim with action? Then here are 25 games that you'll enjoy that are available for iPhone and iPad.