Dress up as a witch or the Grim Reaper

There are three different outfits in total which include the Witch's Costume, Reaper's Robe and Omega Garment. Beyond that, however, there are a variety of palette swaps available for each of the outfits that are all named after different sweet treats such as Blueberry Tart and Butterscotch. 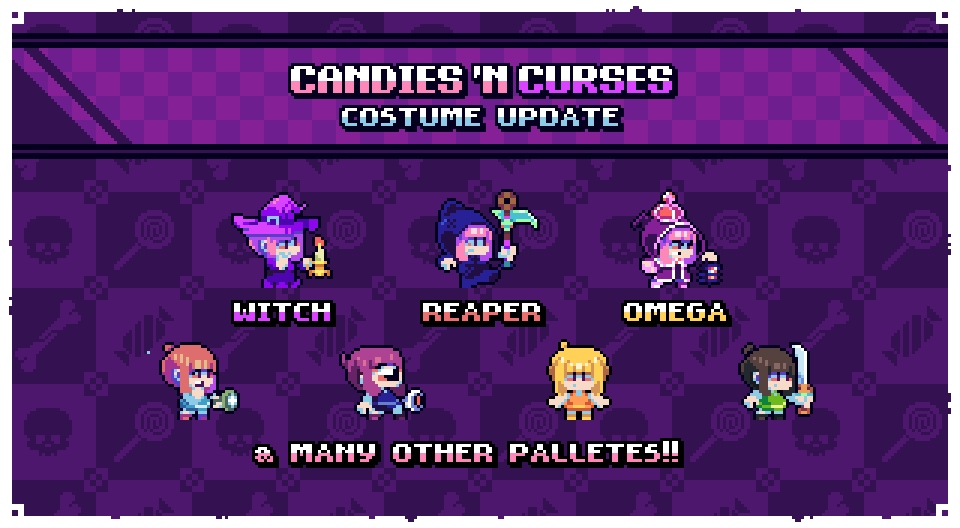 It also brings some extra completion to the game for those who like to aim for 100%. Talking to the various NPCs around the manor will give players different dialogue to the normal when sporting these outfits. Once you've heard all of the conversations available for that costume you will see a pink star next to it in the menu. Similarly, there will be a gold star next to it if you've beaten the game wearing it.

Elsewhere, the team has also squashed a number of bugs that were present in the game. For instance, Molli would occasionally end up outside the mansion walls or the bubble gum shield would become invisible when reviving.

If you're unfamiliar with Candies n' Curses, it's a fast-paced ghost hunting game where you play as a young girl called Molli who has embarked on a journey to save her friend from a haunted mansion. At the end of each level, players are offered a mixture of candies and curses which provide perks that can be both beneficial and detrimental.

Harry Slater reviewed Candies n Curses for us back in 2018 where he described it as 'perfect example of meshing together the old and the new'.

Candies n' Curses is available now over on the App Store and Google Play. It's a free-to-play game with in-app purchases.

Looking for more great platformers? Here are 25 of the best available for Android
SEE COMMENTS