Surviving Titan is the latest game to be created by Myles Panayiotis who previously made Amethlion. It's a survival game where players will find themselves stranded on the titular planet Titan after their escape pod crash-landed on it. We decided to send our App Army to the aforementioned planet to see if they could survive in a new world and have some fun while doing it.

Surviving Titan is the latest release from Myles Panayiotis, who’s previous work is the recently-gone-free Amethlion. The open-world survival genre is crowded with many incredible titles, from the moody and enthralling Don’t Starve to the tongue psychedelic silliness of Crashlands. Amethlion was a slightly pale project on the scene, with forums echoing my own feelings that movement was slow and gameplay sluggish.

Surviving Titan promised to be a big step up from Amethlion, so I was excited to try it. There has clearly been a lot of work and love put into the game with graphical trappings which evoke Stardew Valley. The dynamic lighting is great, with bolts from your blaster streaking through the night, lighting up your target as it misses for the third time, despite your aim being correct. There is a feeling of great depth in possibility under a veneer of obscurity, bugs and unintuitive mechanics. 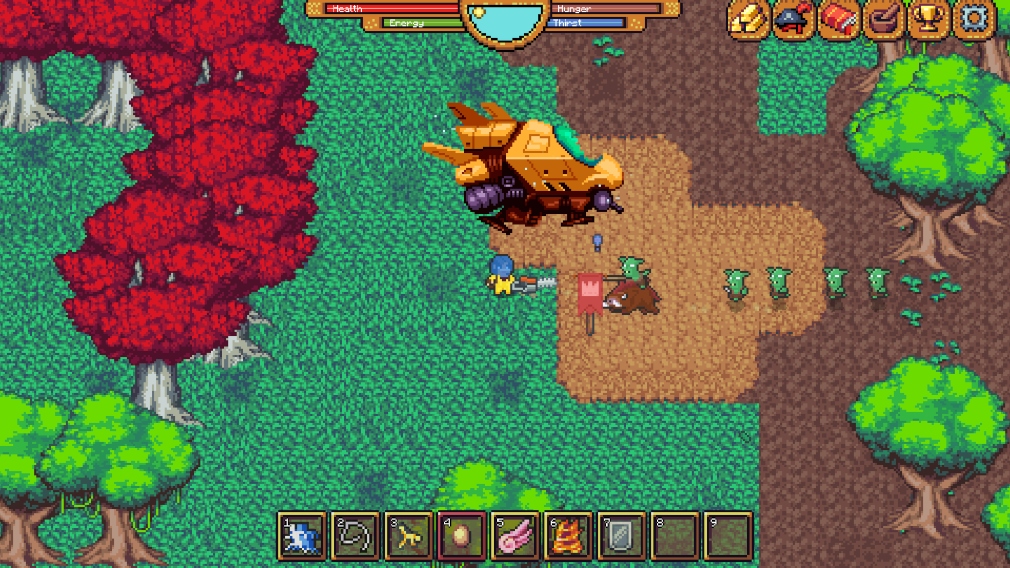 I have tried to fish, but I must be doing something wrong, I managed to craft ingots with my furnace once, quite accidentally, now when I need to for a quest, there is no apparent interface with my furnace as I exhaust various techniques for bringing it to life. Titan itself is quite a friendly place with plenty of food, wood, rocks and seeds laying around. I tried my hand at farming but I can’t figure out how to dig holes to plant seeds.

Hit and collision detection also leaves something to be desired, fighting with wildlife can feel like you are oil wrestling an angry spirit as you desperately strike in all the wrong directions. Then there is the floor switch puzzle I found in the wild, difficult because moving the boulders onto the switches was like trying to use chopsticks with a hand that’s gone to sleep. After I hit all the switches nothing happened, so I left. On returning much later, a trapdoor spontaneously opened.

There are many more rough edges to iron out. Frequent crashes on my iPad Air 1 and occasional crashes on my 7+ also added to the frustration. I will keep an eye on this one, because there is potential for a fun experience, even if it doesn’t carve a legacy out for itself in the genre. It just needs to be patched heavily, and the developer seems to be doing just that.

I have been trying to get Into this game all weekend. It’s a survival game with an art style similar to Stardew Valley. A type of game that I think I’d like a lot. Too bad I find the controls horrible! Moving around feels like a chore and the icons on-screen are far too small. It’s not optimized for a modern iPhone so the notch keeps blocking important menus like the crafting screen. I’m sure it would be more enjoyable on an iPad with a controller, but as I tested it, it was just an exercise in frustration. 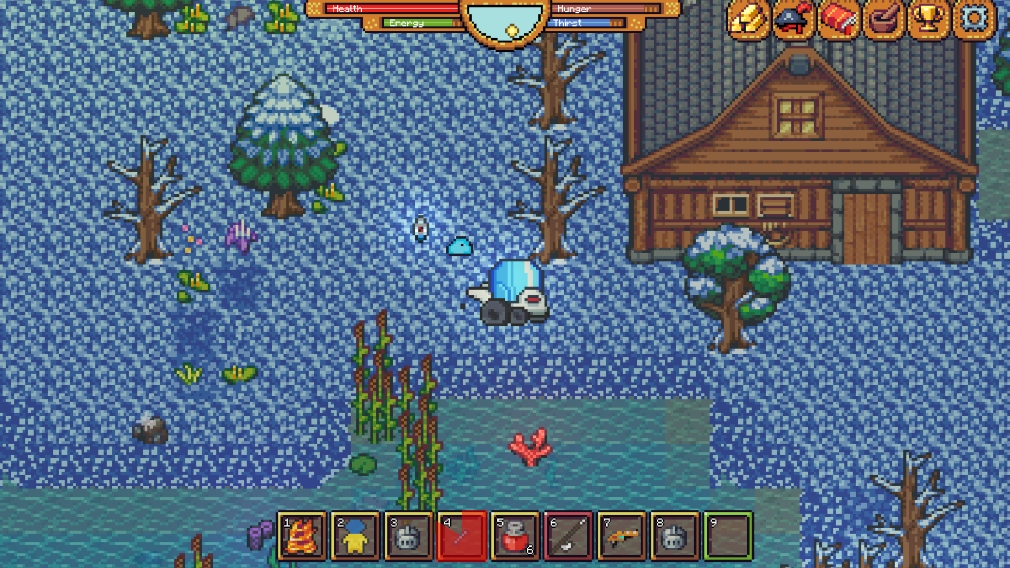 You wake up on Titan suffering amnesia and have to learn to survive with the resources you can find and build. While the retro graphics are acceptable, the gameplay is slow to start, with far too much storytelling before finally leaving the escape pod.

Actual gameplay didn’t have anything new to offer as such, find logs, craft things, find food, etc. As far as games in this genre go it was okay but it needed a lot of time spent on it to progress to bigger things and it didn’t give me enough imaginative content to make me do that.

Real diehard survivalist game players will want to add this to their collection but it’s not unique enough for me.

Since I saw the game on Reddit, it caught my eye. You land in an escape pod on a planet called Titan, where you need to explore, craft, fight and feed yourself in order to survive. From the start, I get a mix of Stardew Valley and Crashlands vibes. Even though the game is not very original, it has some great things from both games.

It will, probably, tick all your boxes if you like games where you need to survive: build your own settlement, growing your own crops, fighting, unlocking new skills, making yourself more powerful.

But, to the bad things of the game. The story is nothing you haven’t seen already, the controls aren’t very good, and I had quite a few crashes (luckily, the game-saving system is very good and I didn’t lose any progress). Also, I think the tutorial doesn’t explain everything (unless I skipped something on accident, I still don’t know how to drink water).

Still, I think the game has a lot of potential. The pixel graphics are well done, and it has something that makes me sink a few minutes every now and then. If you like games like Crashlands, you will probably like this one. Really looking forward to new updates and upgrades!

Very bad controls that are not responsive. I think is the game is not tested. People will uninstall this game or give a lot of negative feedback. Ui is very cluttered and fonts are so small.

I put this game in my wishlist as soon as it came out, so I was very happy and intrigued when I got the opportunity to give it a try. Unfortunately, it didn’t meet my expectations. The idea behind “Surviving Titan” is exactly the same as in Crashlands, but it is not executed as well, mainly because of the controls.

When I had to click on objects to craft it was very frustrating, as almost 3 times out of 4 I just ended up tapping the screen for a few minutes waiting for something to happen. I am sure the developers will put some effort into solving these issues, but I would wait a little bit before buying the game.

I was kind of intrigued to play this as I’m a fan of sci-fi survival games, particularly after playing Crashlands. But I have to say that this was a bit of a disappointment. The graphics were okay if rather bland and generic. Sounds were okay. Depending on how I held my phone in landscape, the “notch” hid the side crafting menu.

The game’s idea is very simple. You wake up in your escape pod on Titan and set about keeping yourself alive by gathering resources and building things. Very standard. But I found the movement controls to be occasionally not responsive. Enough to be frustrating. And when I was at the point where I was told my energy was low so I needed to lay down and sleep, well, I went to the escape pod only to be told that it was too early to sleep.

So I went back out, was chased around by some marauding animal (I think it was a bat) and killed. And that pretty well sums up my experience of Surviving Titan. It could be that there is a good story here somewhere, but I was not persuaded to stay and find out. 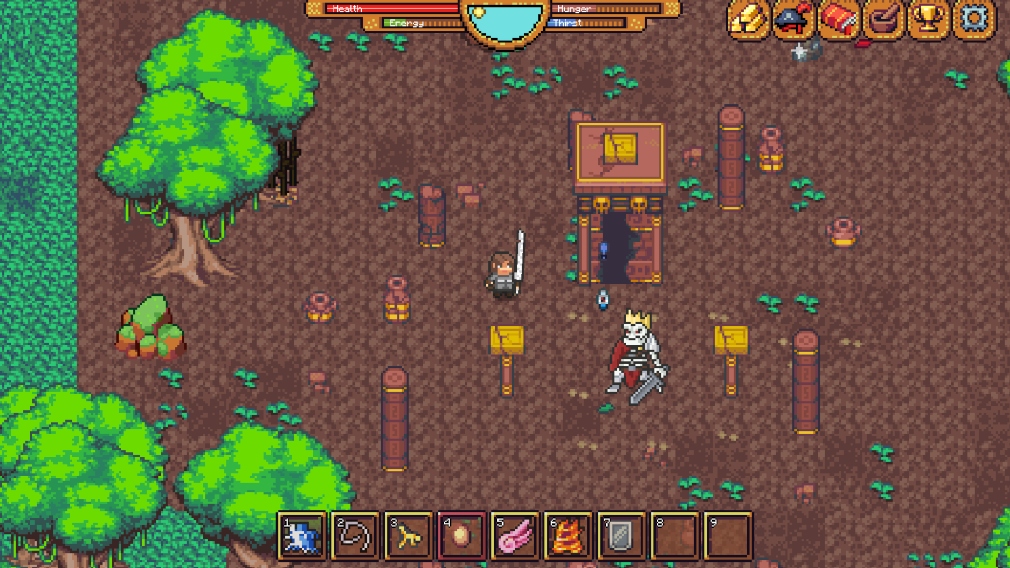 Having put a little bit of time into this game I can’t say I very impressed. The controls are imprecise and the screen layout is untidy. I have seen similar games adapt to a mobile screen much better. The story is pretty cut and paste from other games leading to the usual crafting grind to resolve. Graphically the pixel graphics don’t cut it and just end up looking a bit childish. Overall I would only recommend to the most hardcore survivalist out there looking for something to put some hours into.