Frogmind Studios has globally released Rumble Hockey today for iOS and Android, following a brief soft-launch in select countries. It follows the release of Rumble Stars Soccer last year, with the developers referring to the pair as 'sibling games'.

Given that description, it's probably not too surprising that the two games are incredibly similar. Rumble Hockey will feature all of the characters you'll be familiar with if you've played Rumble Stars Soccer before as well the first to 3 goals setup. 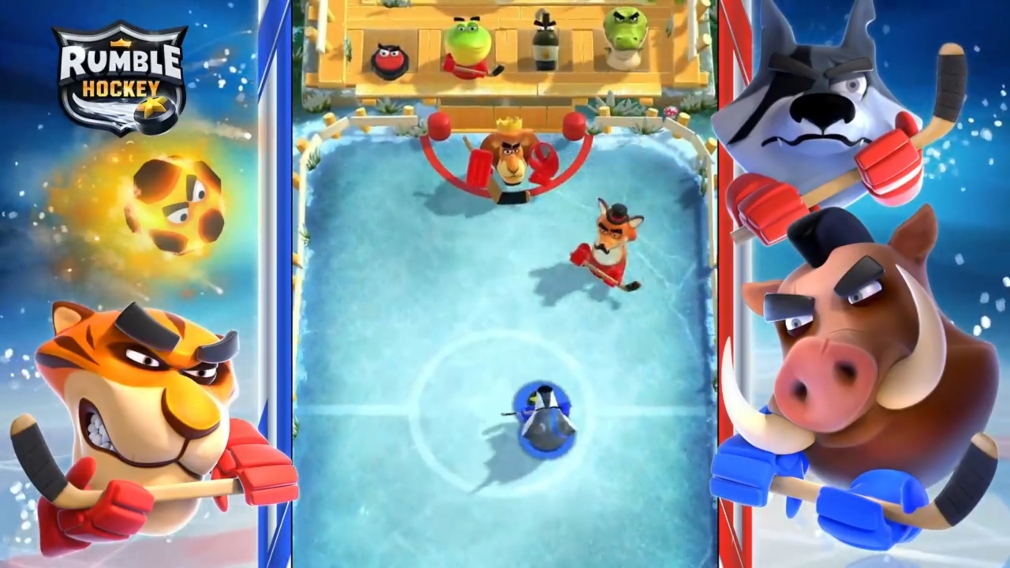 Reckless Hog, Stick Puffer, Energy Pump and all of the others are still here and they work in the same way too. For instance, the Dashing Deer will still jockey from side-to-side to try and intercept passes and the Enchanting Unicorn will still make a Rumbler switch team temporarily.

The only Rumbler that has really changed is King Goalie, who now strafes around the goalmouth as you'd expect from a hockey goaltender. This will apparently lead to goals being scored through combos more so than anything else.

Frogmind has also said the arenas are bigger and due to the game being played on ice it will be much faster-paced than its football-based brethren. In practice, this should make Rumble Hockey a good fit for those with quick reactions.

During its time in soft-launch, Frogmind has also taken the time to analyse the stats of each of the Rumblers and have adjusted them for the global launch. This includes increasing the goalie's movement towards the puck and reducing the field time of many characters. A full list of the changes can be found in a recent developer post on Reddit.

Rumble Hockey is available now over on the App Store and Google Play. It's a free-to-play game with in-app purchases.

Looking for other multiplayer games to play? Here are 25 of the best available for iPad and iPhone
SEE COMMENTS