Heading for iOS and Android May 28th

Poker Showdown: Wild West Tactics is an upcoming turn-based strategy game that looks to blend poker with elements of collectable card games. It's been developed by two-person studio Tinker Troupe and is heading for iOS and Android on May 28th as a free-to-play game.

Each turn in Poker Showdown: Wild West Tactics is made up of three main phases. First, you'll place bets using bullets before building as strong a 5 card poker hand as possible in the second phase. This builds up power which you can then use to shoot your opponent's bandits down before they can do the same to you in the third phase. This will continue back and forth until there is a winner. 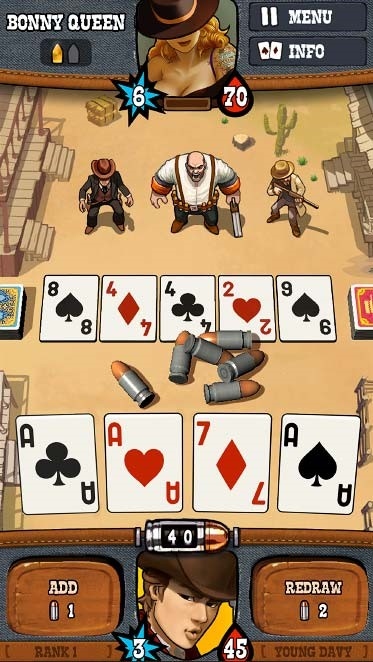 You'll be able to pick from a variety of different bounty hunters who can be upgraded throughout your singleplayer journey. This takes place across four regions and will see you on the hunt for four gang leaders and other outlaws. If you're into your gunslingers, you'll apparently recognise a few of them.

There will also be cards can collect that will possess unique abilities. They can also be upgraded to make them more potent in battle as you continue to build your deck and adjust your tactics.

Aside from the singleplayer mode, there will also be asynchronous multiplayer on offer as well. This means that you'll be able to take turns against your opponent at a time that works for you. There will also be a leaderboard so you can see how you rank among other players from around the world.

Poker Showdown: Wild West Tactics will be available on the App Store and Google Play when it releases on May 28th with pre-registering open now on the latter. It will be a free-to-play game with in-app purchases.

Interested in other upcoming games? Here are some of the best games that are currently available in soft-launch
SEE COMMENTS