Everything you need to know about Sonic's latest sporty title

Sonic at the Olympic Games Tokyo 2020 is out now, and might be one of the only ways to enjoy to 2020 Olympics until this whole COVID thing blows over.

You can download the game right now for free and enjoy a huge variety of minigames, each very different, though inspired by what you've seen in previous games where Sonic has an Olympic adventure.

Here we've decided to list for you all of the characters, bosses, events, and new EX events that currently feature in the game. We're positive that we'll see some new characters and events in time, but until that time comes, this is what we're dealing with. Though, it's not a terrible list.

Sonic at the Olympic Games Tokyo 2020 is, essentially, a small minigame collection, but it's a perfectly serviceable one which is a lot of fun. So download the game, brush up on what you can find inside using this list, and enjoy some quality quarantine gaming.

As you would expect from a minigame collection where Sonic is at the Olympic games, there are a whole bunch of Sonic the Hedgehog fan-favourite characters returning to play with Sonic and pals. Admittedly, the selection here is a little bit lighter than you might be used to...

Mario and pals are out of the game, leaving Sonic and friends to fend for themselves. A sad state of affairs to be sure, but this is still a decent beginner list of Sonic characters, and we're sure to see more in future updates to the game.

These minigames aren't all family fun - sometimes it gets serious. Boss characters will show up to challenge you in events, and unless you're practiced and ready, they may run you down.

Upgrade the abilities of your characters, and get ready to fight against some fun bosses - hopefully these will get added as playable characters in time...

These events will be familiar to anyone who has enjoyed going to the Olympics with Sonic and friends previously, but of course, all of them are adapted to work well with a mobile device's touch screen.

This will add a new blend of gameplay varieties, some of which you may find inferior to past Olympic adventures, while others are undoubtedly better.

Finally, there are EX Events. EX Events are a lot like their standard counterparts, but the difficulty will be ramped up with all new courses to navigate and rings to collect in the games. 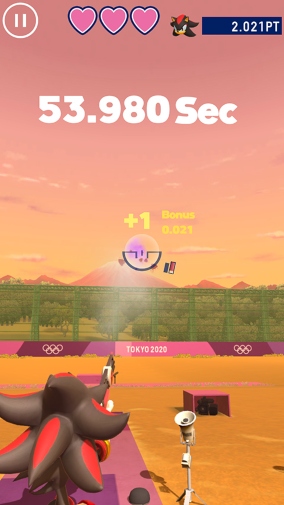 These are a great way to spice up the limited number of modes but aren't perfect by any means.

The Otherside is a turn-based, strategic RPG about battling otherworldly beings and it's available now for Apple Arcade