New challenges to beat and tour gifts to earn

Mario Kart Tour's Yoshi-themed tour has ended and a new one has taken its place. The latest is called The Trick Tour and will run from today until 6th May at 6:59 here in the UK, though it will differ depending on your timezone.

As always this will see players collecting more Grand Stars and competing in the various cups available. There will also be a host of tour gifts on offer that will differ depending on whether you're a Gold Pass subscriber or not. 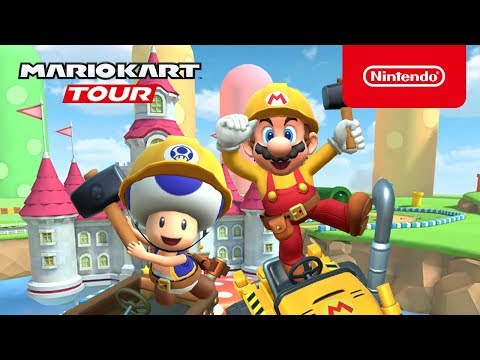 If you've decided against paying that monthly fee you'll be able to get rubies, Shy Guy, a Landship Kart and Piston Glider if you manage to gather enough stars. Meanwhile, the Gold Pass Tour gifts don't have a character this time. Instead, you'll be able to get a White Royale Kart, Gold Train Kart and a Barrel Hanafuda glider.

There will also be a new character, glider and kart in the Spotlight. For the first week that will be Builder Mario, Dozer Dasher kart and Safety Glider whilst it will change to Builder Toad the following week. Builder Mario comes equipped with a Hammer as his special skill, of which multiple can be thrown in an arc at the karts in front of you.

The Dozer Dasher Kart meanwhile has a skill called Dash Panel Plus. Unsurprisingly that will greatly increase the Dash Panel boost time and the points for using one. The Safety Glider will grant you the special skill Bob-omb Plus which increases your chances of getting a Bob-omb and net you more points when you use one.

Mario Kart Tour is available now over on the App Store and Google Play. It's a free-to-play game with in-app purchases.

Enjoy competitive multiplayer games? Here are 25 of the best available for iOS