Hidden Through Time is an adorable looking hidden object game. As the name implies, you'll be on the hunt for various objects that have been scattered across different periods in history. Sounds like a job for more than one person, so we enlisted the help of our App Army to see what they could discover.

I love hidden object games and this one didn’t disappoint. The graphics are simple but amusing, the items you are finding are of varying sizes and can be difficult to spot straight away, and even the background music isn’t too annoying.

Searching is made easier with the ability to zoom and reduce the screen, which I liked, and tapping on the different things in the scene make little noises - like the duck quacking., children giggling or the dinosaur roaring.

This isn’t an overly difficult game and it is finished quite quickly, but it’s an ideal way to spend ten minutes at a time when you have nothing else to do. Definitely worth a go.

Hidden Through Time is a hidden object game like the game Hidden Folks. At first play, I found (pun intended) Hidden through Time to be sharp and colorful even when magnified. Truth be told while playing the first few story mode scenes, I replayed Hidden Folks at the same time.

One thing I noticed while playing Hidden Folks, was the clues were straight forward. This was not the same with Hidden Through Time. You must touch the object you are searching for to reveal its clue. I found this less self-explanatory.

On my second go-around of the game, the menu screen did not display properly. The only thing that fixed the issue was reinstalling the game. Overall, I think this game has so much potential. From what I saw of the game’s timeline, it was wonderfully presented. I also find the idea of creating and sharing scenes a fresh idea of the hidden-objects genre. 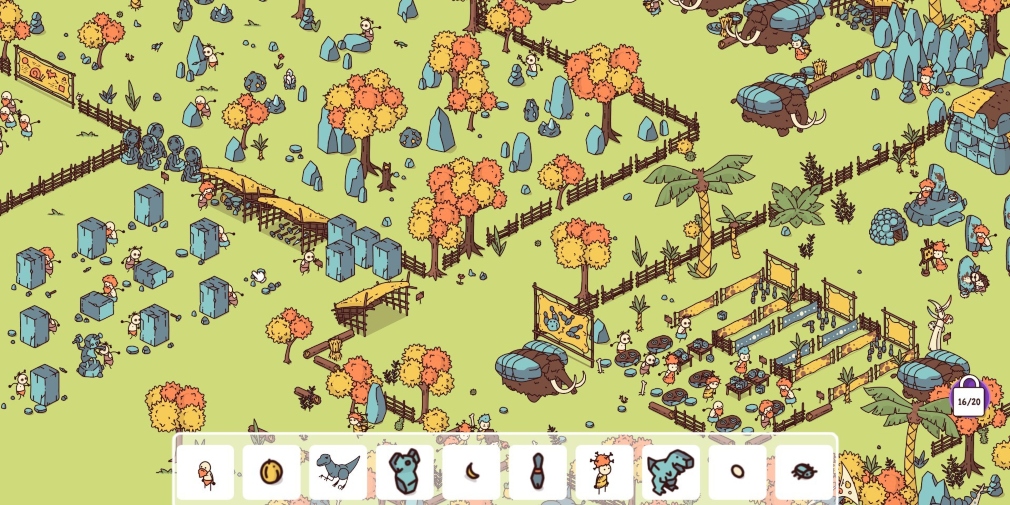 As the title suggests, the game is about finding objects. Different human eras and objects are used. The artwork is very good. The music choice is okay.

This is a cute hidden object game that reminds me more of Where’s Waldo than most hidden object games. There are so many similar-looking objects to what you’re seeking that it really is like picking a needle out of a haystack. The music is pleasant and the sounds appealing.

What controls there are, zooming in and out, and clicking on items once you’ve found them, tend to work fine. But they are basic, so it’s not asking a lot. I’m intrigued by the level editor to take the game to a new level. Not really my kind of game but I can see what it has going for it, and I’d recommend it to fans of the genre.

In times when the App Store for the 12th consecutive year regularly receives new arrivals, it is hard to come up with some ground-breaking concept of a game, so devs understandably turn to already proven ideas. There is no hiding (pun intended) that Hidden Through Time derived all its main ingredients from a superbly awesome Hidden Folks.

Only this time around the setting is different (the main theme is the history of mankind), the chromatic scheme is different (every nook and cranny of the game is abundant with colour), everything else is the same, well almost. While HF feels more imaginative, innovative, inspired and quirky, HTT presents itself as a slimmed-down, simplified version of the former.

Main gripes: there are far less interactive objects/subjects in the game, the fully zoomed-in search area turns grainy and pixelated on an iPad Pro 10.5, the search items repeat themselves from level to level, the search clues are not always to the point.

In conclusion, I must say that the fans of the genre who are in search of some fresh gaming fodder will certainly have their moments with Hidden Through Time, but to those who are new to the "Where is Waldo?" type of games, I sincerely recommend picking up Hidden Folks first. 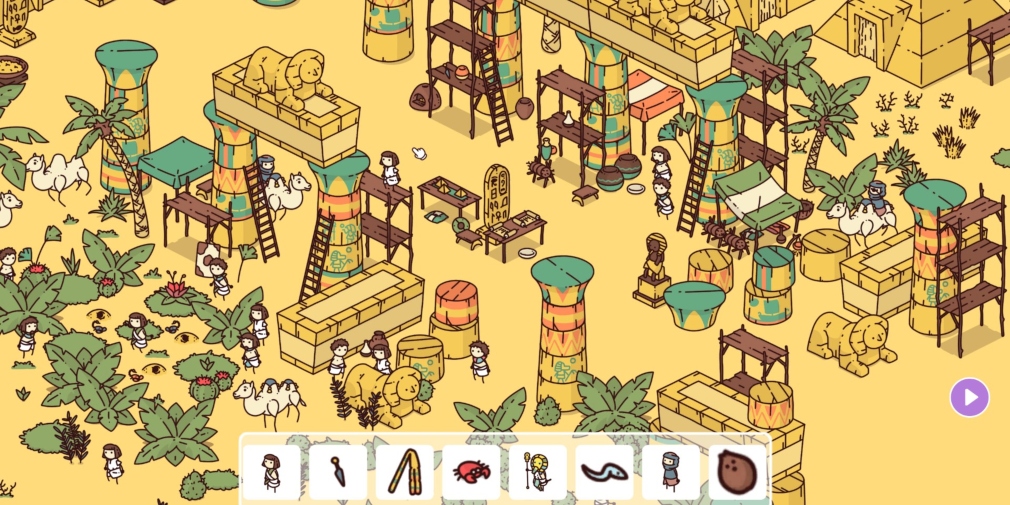 I think I would really enjoy Hidden Through Time and would probably give this game pretty high score, if not for one big "IF" - it does not work on my iPad and crashes to the home screen every single time I attempt starting a game from the main menu. To check it out I had to borrow a beefy iPad Pro 10.5" and in this respect, I have spent only very limited time with this game.

Considering all these the review in question should be taken with a grain of salt I guess. Anyway, I absolutely loved what I saw and heard. Levels are lush, colourful and rich in the tiniest details. Music is calm, soothing and helps set the right tone.

Am I playing the sequel to "Hidden Folks"? I've been asking this question to myself time and time again and would never have thought that "Hidden Through Time" comes from a totally different developer. I do hope that they fix all those nasty bugs in no time so that I will be able to continue my journey through different time eras as HTT is the very type of game that makes me ditch my beloved Xbox and switch back to mobile gaming.

I’ve not had a long time with the game but can give my first impressions. I like the graphical style but the scenes and characters are a bit repetitive. The worlds could use a few more interactive, animated elements to bring them to life and keep it interesting. Despite the added colour and puzzle builder this doesn’t quite seem to have the charm and character of Hidden Folks. Can’t fully recommend but could do worse than this to fill your time.

I’m not a fan of hidden object games and unfortunately Hidden Through Time hasn’t changed my opinion. The graphics and sound are pleasant enough and the limited interaction with some objects (looking inside buildings for example) does add to the game playing experience.

However, I find these types of games frustrating even with the ability to zoom to get a closing look on the game screen I soon get stuck. The clues given for each object you are looking for does help but not enough for me to keep playing. If you love hidden object games then you will probably love this way more than I did.

Hidden Though Time is a hidden object game. The gameplay is very simple, find different objects in each scene. Music is pleasant, graphics are cute. Relative to the size of the objects to be found, the scenes are huge, so finding the objects can be very difficult, even with the short little clue.

This particular game is so very much like one particular predecessor - Hidden Folks - that some comparisons have to be pointed out. First, HTT has colour; this is not much of a game-changer. Second: HTT has a level editor that allows players to make their own scenes. I tried a couple of these user-created levels, and they were merely ok... just more of the same, really.

Third and finally, HTT is less dynamic... for example, there are levels in HF where some of the people are skiing down a mountain, so some of the objects you need to look far are constantly moving around. I see no similar features in HTT, except some stone blocks which, when tapped repeatedly, would reveal an inner sculpture.

So, if you like hidden object games, go for it. I can't say I'd recommend this more or less than Hidden Folk, but if you've completed that game and still want some more, this is certainly one to pick up. 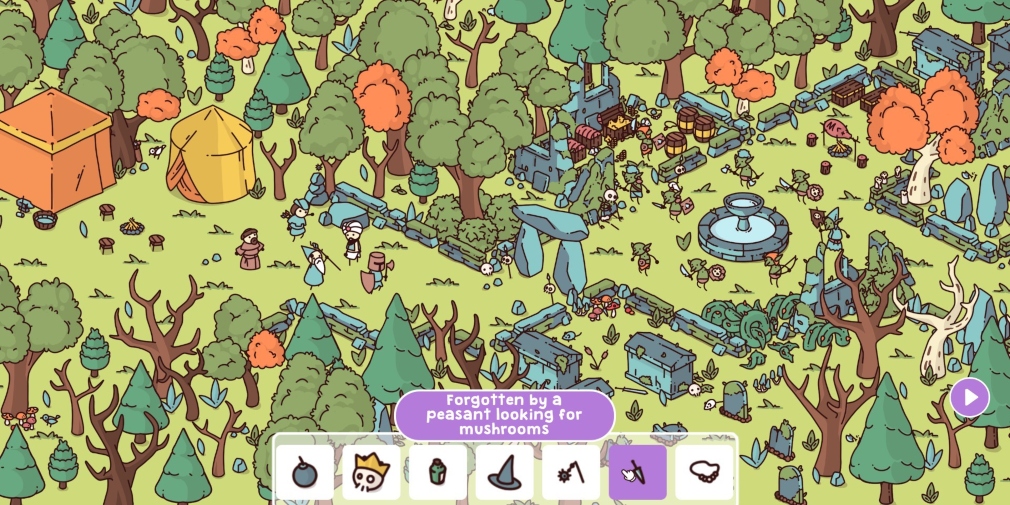 If you enjoyed The Time Geeks games and more recently Hidden Folks then you’re sure to get a kick out of this one. With fun looking characters, nice sound and simplistic controls, it’s not a bad game to pick up and play

But it’s missing something that made those other games hard to put down. There is definitely less to interact with and even though it’s in colour it doesn’t quite capture give me the same excitement I had when playing the other games. I’d still say give it a go because it is fun but I’m not sure it’s headed for classic status.

This is a simple hidden object game which features simple graphics and chill but scary music. There is an online mode present where we can play levels created by others which could be fun with friends. I didn't really enjoy or get addicted to the game since I felt that the music was kinda depressing and also I didn't like the historic and weird and imaginary setting in the early levels.

The UI isn't great and uses low-resolution images for buttons which makes this game look low quality. The graphics are also simple and the game can run on devices with weaker CPUs, but the game doesn't use high res graphics and therefore looks low quality when you zoom in.

The game does have Google Play Games support but it doesn't have anything like Play Games achievements or Leaderboards or an option in the game which lets you see what it actually uses the service for. Overall this isn't really an enjoyable experience and I wouldn't recommend it for the full price. 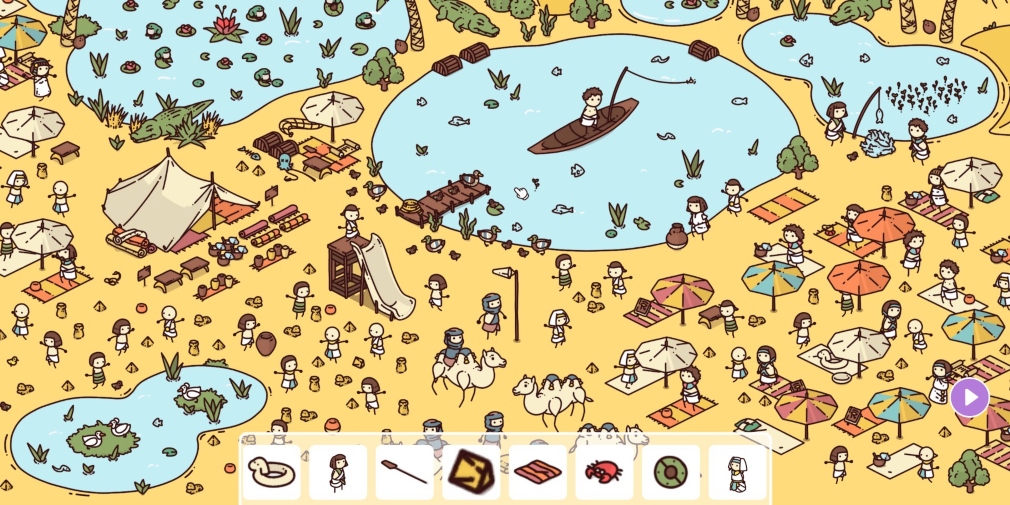