One Piece Bon! Bon! Journey!!, the match-3 puzzler based on the popular anime, is available now for iOS and Android

The Straw Hat Crew have been recreated as bonbons

We first covered One Piece Bon! Bon! Journey!! at the start of February this year, where it had no concrete release date at the time. It turns out it wasn't too far away at all because the game is now available to download for both iOS and Android.

If you've not heard of One Piece Bon! Bon! Journey!! it's a match three-based puzzler based on the popular anime. More specifically, it's a match-three battler where each time you line up the little bonbon versions of the characters they will leap off the board and attack one of the enemies you'll be facing on each stage.

The game will have its own story too, so it won't just be a series of match-3 battles with One Piece furnishings. There will be several scenes from the anime that have been recreated in bonbon form, which sounds adorable. Long time fans will no doubt enjoy seeing their favourite scenes presented in a new way.

The bonbons themselves will feature the faces off many well-loved characters from One Piece such as Luffy, Zoro, Sanji, Nami and Robin. It all looks very cute and outside of the whole match-3 shtick players will even be able to spend the treasure they've collected to decorate their own personal island. 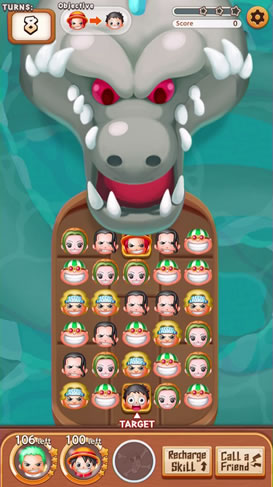 To celebrate the launch, Bandai Namco is giving players a variety of different rewards that include the following:

We're not exactly short of choice when it comes to match-3 games on mobile, so it's not an easy genre to stand out in. Of course, having the licence of a popular anime to adorn your game with certainly can't hurt.

One Piece Bon! Bon Journey!! is available now over on the App Store and Google Play. It's a free-to-play game with in-app purchases.

Do you enjoy some match-3 action? Here are 10 of the best match-3 puzzle games on iOS

Sky: Children of the Light launches for Android next month and Switch later this year