There will also be events and rewards to celebrate!

Brave Nine, previously known as Brown Dust, is celebrating its anniversary with a host of new content for players to enjoy. The latest update introduces the World Arena, new Companions and the Underground Evil Castle dungeon.

Players have been waiting for the World Arena for some time now and they'll finally be able to enjoy the new PVP mode. It will see the best players from around the globe battle it out to determine who has the best strategies with the greatest rewards on offer for those who emerge victorious.

There's something for everyone though, so if you prefer PVE then you'll be able to fight your way through the Underground Evil Castle's 30 levels. There promises to be tonnes of loot to discover within its confines alongside monsters that will be stronger than their vanilla Evil Castle counterparts.

Elsewhere, three new Companions have been added to the game called Destiny, Sophia and Emma will team up with existing mercenaries Edin, Veronia, and Jayden respectively. They will unlock sub-stories for the mercenary partner whilst allowing them to reach +15 skill level. 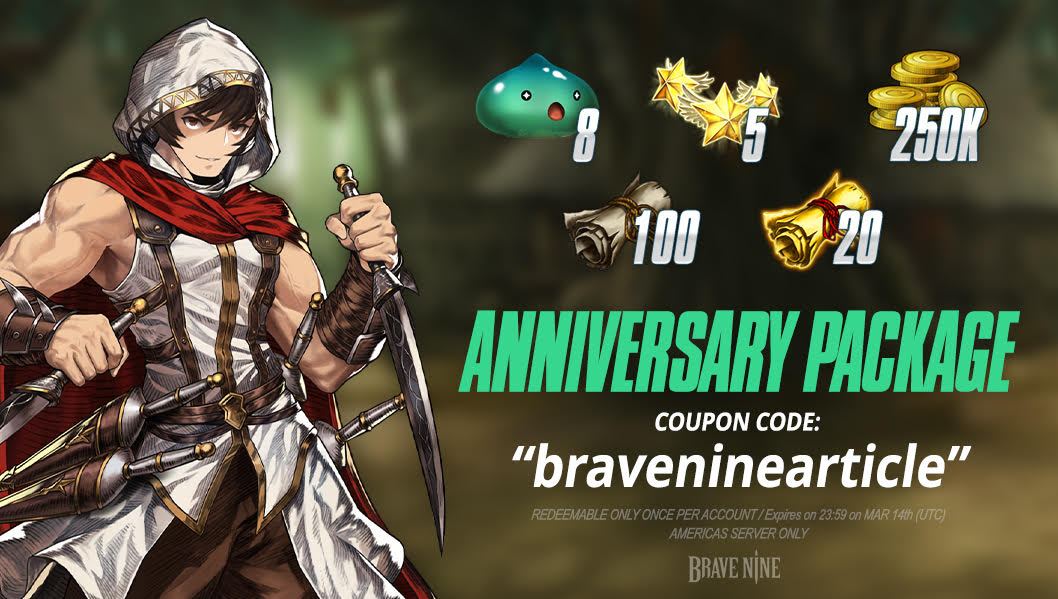 To further celebrate the anniversary, new and existing players will be able to purchase a special gift box for 2 Gold from the Hot Deals store. If you happen to play on the 'Americas' server you'll be able to redeem the code 'braveninearticle' to net yourself the 'Anniversary Package' which will contain 20 Premium Scrolls, eight Emerald Slimes, 100 Normal Scrolls, five 3-star Rank-up Stars and 250,000. You'll only have until 14th March to use the coupon though.

Brave Nine is available now on the App Store and Google Play. It's a free-to-play game with in-app purchases.

On the hunt for some top-tier strategy games? Here are 25 of the best for iPhone and iPad