Play Byleth like a pro and smash the competition!

Byleth certainly is not another Marth or Ike clone, and instead plays very differently from the rest of the swordfighters in the roster, which is helped by the fact that Byleth actually also has a bow, lance, and axe to pull out, in addition to the Sword-Whip, the Sword of the Creator. 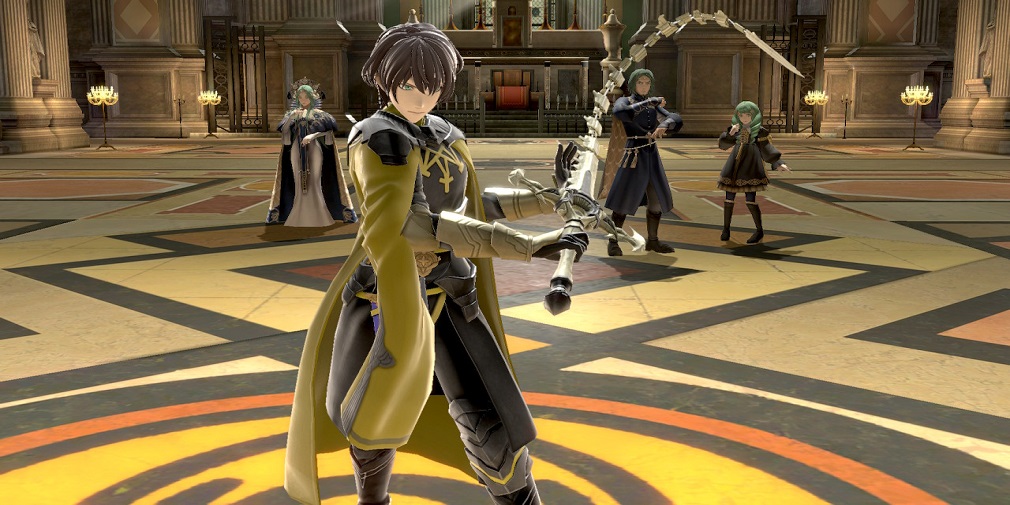 Byleth, like all of the other DLC characters in the game, comes along with a brand new stage, Garreg Mach, and really makes the stage feel like home. It's a transforming stage, and also has a bunch of other characters from Three Houses in the background, spectating your matches.

The latest Fire Emblem character is certainly the most unique one to land in the game yet, and as such, there is a lot to learn. So read on for the move breakdown and strategies you need to win as Byleth.

Make sure to read through our other Super Smash Bros. Ultimate DLC character breakdowns right here…

Byleth is a character with a shocking amount of range for a Fire Emblem character, and some decent, speedy attacks to back that range up with. Despite that though, Byleth has several drawbacks, and as such, you shouldn't be trying to compete in an up-close melee frenzy.

Many of Byleth's special and aerial attacks will leave them with a decent amount of landing lag when touching back down on the ground while mid-animation, leaving you wide open when blocked or dodged. As such, Byleth is best played as a grounded character, and their limited Up Special recovery, a grapple (similar to Persona 5's Joker), backs this up.

But on the ground, Byleth can pressure, or even kill, at range with the bow special, and their other moves can be used to inflict big damage and knockback.

As such, your general strategy with Byleth should be to keep a fair distance, poke with tilt and aerial moves, before using specials and smash attacks to finish opponents off. Be especially careful around characters with fast, multi-hit attacks, as you'll be unlikely to escape easily without a counter.

Byleth's tilts are pretty handy here, and can be used in a variety of situations. The basic jab combo is intact, and comes out very quickly, but the most useful of Byleth's normals has to be the up-tilt. Up-tilt has Byleth swing her sword from left, up in an arc, and down to the right. This is a pretty standard attack, but Byleth's hitboxes are large, and can even hit smaller opponents stood next to them.

Forward tilt has decent range and can be used to kill on walk-off stages, down tilt is a decent, if a bit basic attack which stretches out in front slightly. Of all the normals, the most obviously useful is the up-tilt, which can be combo'd into up-air.

Smash attacks, meanwhile, are very strong indeed. Forward smash is a powerful prod, much like Corrin's, and can easily kill. Up smash is another multi-hit whip, like Zero Suit Samus, and is about as useful (best used to catch incoming aerial opponents). Down smash is a typical attack which hits on both sides, but it's very quick and therefore we can't complain.

Byleth doesn't have the strongest aerial game, but can still be pretty fierce. The up air is a nice multi-hit whip which has hitboxes last for about a second, and will be great for combos.

The back and forward-air, meanwhile, just prods enemies with a lance. This is no complaint, because it comes out fast, and can definitely be used to kill, and in combos. Down-air is also great, as it can spike opponents and finish them off.

But as mentioned previously, Byleth tends to have a lot of landing lag on her moves, to be careful with jumping and attacking too much. Down-air's landing lag especially will leave you wide open for wary enemies.

The special moves are absolutely what sets Byleth apart from other characters in the game. They has her bow, axe, and lance, and all of them are powerful and ready to destroy opponents.

The bow is the neutral special, and it is a classic charged up attack. At full blast this can absolutely kill opponents, but watch that you don't get caught out mid-charge and punished.

Forward special brings out the lance, and this is a surprisingly fast, powerful, and large hitbox. This can be pulled out when opponents are fast approaching, and can be used as a keep-away tool to have enemies respect your personal space. It can also be used similarly in the air, with Byleth performing a nice spin.

Finally we have the down special, the axe. This is a move which can be charged up, similarly to other Fire Emblem character's neutral special. The big difference here is that Byleth can turn around once while charging, in case opponents try to get around you. But again, this side switch only works once while charging, and the ending lag is pretty huge.

Luckily you'll get some super armour while charging up the axe, and it'll act as a powerful attack which can smash through most enemies. If you can pull this out as a surprise, it'll definitely net you a kill or two.