It will be available on 16th January

Neutronized's latest game Mineblast will be heading for iOS and Android this week on the 16th, according to a recent tweet. The developers – who are best known for Super Cat Tales and most recently Yokai's Dungeon – is going for a more destruction focused game this time around.

It will also be a return to Neutronized's platformer roots they took a step back from in Yokai's Dungeon. Except that, this time you'll be able to alter the world you're jumping around in a tad. Set deep in a series of mines, you'll use sticks of dynamite to help navigate the various underground networks.

As you can see from the trailer below, this includes blowing up the foundations of certain structures so they'll create bridges over gaps you don't have the jumping skills to leap across. You might also need to create gaps in the floor to have somewhere to duck and hide from various hazards as you inch your way across perilous rooms. 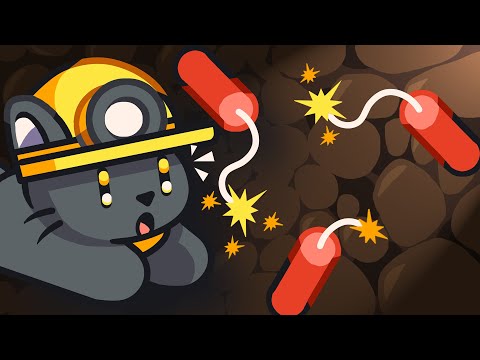 I'm definitely interested to see the other ways the destruction is used to solve different puzzles. In the latter stages of the trailer, you see our cat hero destroy a segment of a rocky structure to use it as a moveable shelter to protect himself from a horde of bats gnawing at his head. Presumably, there will be more smart interactions like this to discover throughout Mineblast.

There will be over 80 levels to blast your way through as well as a plethora of Super Cat Tales characters to play as like Kuro. So there should be plenty of content to keep you entertained, for a few hours at least.

Mineblast will be available on the App Store and Google on 16th January. It will be a free-to-play game with a single IAP that removes all ads from the game.