End of the Universe is the latest in Kyle Barrett's roster of games, following on from Immortal Rogue, which the App Army have shared their thoughts on previously. So, given that they're familiar with Mr Barrett's work, we asked them to give their opinions on his latest endeavour.

What can I say? This is a simple, retro-looking rogue-like space arcade shooter. At the start, you have three simple story paths to choose from, but whatever you decide, the game is essentially the same. Pilot your ship through fairly short levels of dodging around large bodies that seem like asteroids as well as various debris while targeting waves of enemy ships that enter the small map from different locations.

Once you’ve taken out all the targets, you fly to a portal and on to the next one. Oh and if you scrape one asteroid you might be fine, but there are only so many coats of paint on your ship, and after enough hits, eventually you go boom. I enjoyed using the terrain and pretty responsive controls to dodge around and hit the bad guys until they hit me.

The concept is pretty simple so far, but the challenging and sometimes furious dodging and weaving and shooting (I recommend the smart weapon that targets the closest enemy) is addictive to me. It is exactly what an arcade shooter should be. Simple and easy to control with short levels for a quick play. I had no issues with the on-screen controls. Easily recommend for arcade shooter fans.

My impression for this game is that the controller precision should be improved. It is kinda a big deal for me as this issue keeps me away from enjoying the game. The game is difficult but playable.

I don't like closed arenas for space shooters, I prefer a scrolling or circular world system like in Starborn Anarkist, especially if the power-up is blocked outside, it becomes unrecoverable. The controls are precise, although the game is a little slow, and the use of heavy weapons does not seem comfortable to me. The most important thing is that the game is very addictive, thanks to the multiple and varied enemies and the presence of bosses. Overall, I would recommend this game. 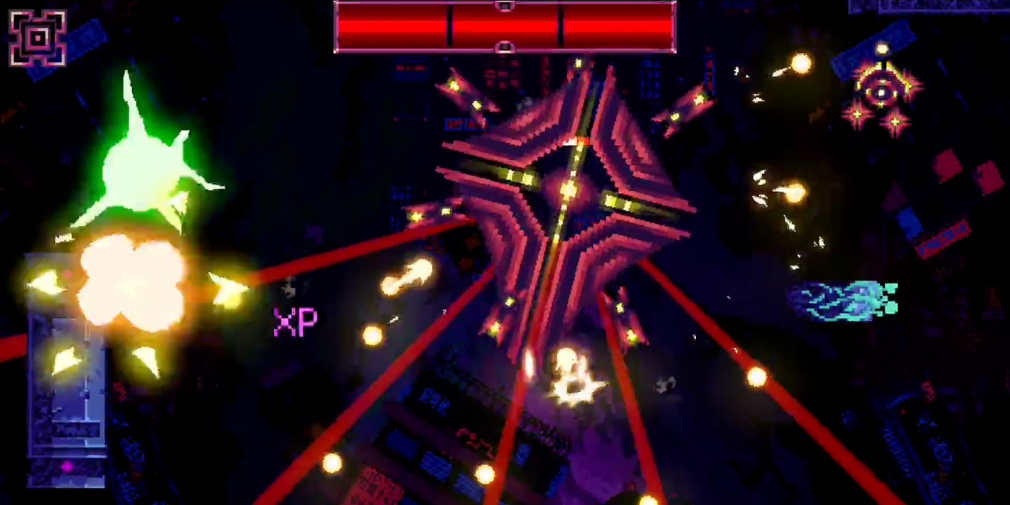 Something felt eerily familiar about the graphics and progression system while playing End of the Universe, and after a quick check, I knew why. It’s from the same developer as Immortal Rogue, a highly enjoyable hack and slasher App Army reviewed on release.

End of the Universe takes the rogue-lite and progression elements from Immortal Rogue and grafts them onto a bullet hell experience. Weapons and new ship unlocks are found randomly with each game while collecting XP dropped by dispatched enemies allows you to permanently upgrade your current ship. The action takes place in a rectangular arena with enemies assaulting from all sides, you’ll need to weave around them and the asteroid obstacles to avoid taking damage.

It’s a winning formula and I’d recommend End of the Universe to both fans of Immortal Rogue and those of space shooters or bullet hell games in general.

Try as I might I just cannot get the feel for this game. It’s nice that the creators have tried something new in terms of gameplay but I found the controls restrictive and frustrating. I've played now for a couple of hours hoping for something to click but found each run more of a chore. I'm a big fan of 8bit tunes however I had to turn the sound off as the ‘music’ felt like white noise torture. Not one for me.

From the description, I expected something like Geometry Wars with upgrades. What I got was a slow asteroids style game. I tried and tried to play it but I found the collision detection a bit harsh, the controls didn’t fit for me and so I kept dying a lot.

I know that's the roguelike appeal, but it was usually due to random obstacles or having to actually fly at the enemy to attack them. The slow turn of the ship means you end up hitting them and you die. I don’t hate this game but I don’t outright love it. It’s not as fast-paced as advertised. 5/10 for me. 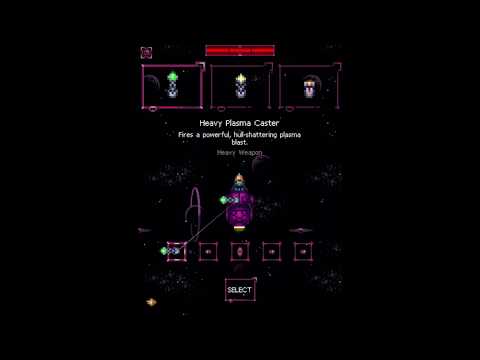 In its genre, it sits between the compulsive playability of Backfire and the frustrating sluggishness of Battlevoid Harbinger. I suggest activating 2 Touch mode in options, even so, it takes a little getting used to. Soon you’ll feel the satisfaction of steering a tiny vehicle by remote control, you might even feel confident enough to steer between two asteroids, you would find yourself stuck midair squarely between them while your health bar bleeds out.

Measuring it against Immortal Rogue, the movement in IR is a lot more intuitive and responsive, the character would dash back and forth against his own inertia like a violent gas. You definitely have a sense of inertia in EotU’s movement, it is as satisfying to master as it is frustrating to learn. It is possible to become highly proficient with a little persistence.

From the ships I have unlocked so far there seems to be a lot of variety in how your strategy changes between ships. The combat is more evasive and delicate than IR’s crunchy attack and retreat. I enjoy glass cannons so I find the focus on cunning to be a valid design choice. EotU is its own beast, less accessible than IR but a deep experience if you have a little patience.

My main gripe with it has been with collision detection, which has ended several decent runs. With ongoing support from the developer, this one is well worth the investment. If you don’t yet own Immortal Rogue, I’d advise you start there.

Mechanics and style look like dozens of other games. The art could be a little bit more elaborate, still keeping the retro style. Controls could be less clunky too. 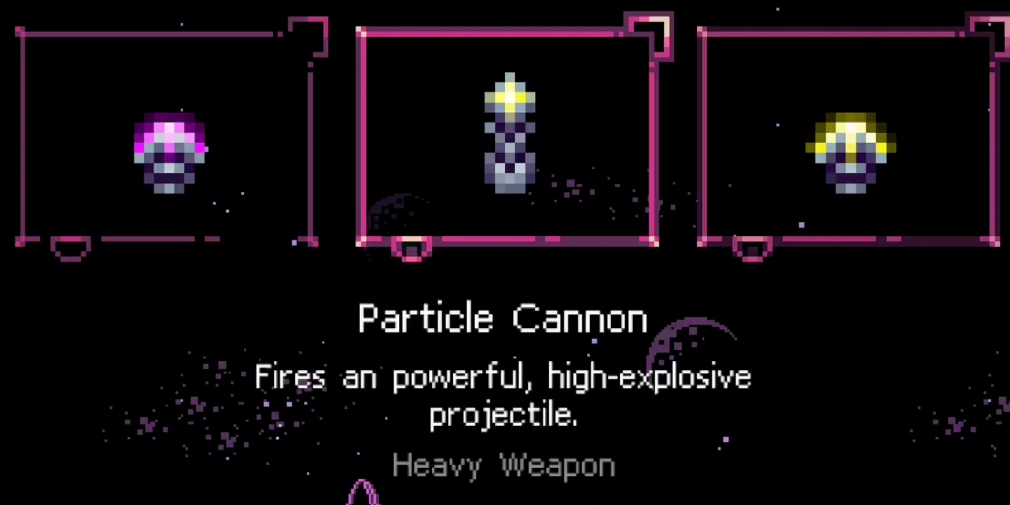 Feels similar to a lot of retro, arcade shooters. The controls are fairly standard but can feel a little clunky at times. You can easily find yourself steering into a wall or rock unwillingly. There is some customisation but not enough to keep me wanting to play to unlock more. I can see how some people would get hooked on a game like this but it’s not one for me.

End of the Universe is a rogue-lite shooter in the same vein as Immortal rogue. It incorporates the codes and the mechanics with finer and more precise control, although it requires significant adaptation time before being mastered. However EotU is harder than its predecessor, gaining XP takes more time, if the first levels are rather simple, as soon as the first "boss" arrives accompanied by his escort, it gets downright hot! Some small optimizations here and there and it will surely become a "game of the week”.

Normally when I hear the phrase "End of the Universe", my mind goes straight to the Big Lots clearance aisle. Now that it's an arcade shooter by the brilliant Immortal Rogue dev, I think differently. I wish the mindset behind the controls thought differently as well,

Part of the reason Immortal Rogue worked so well was that the game automatically aimed at the closest enemy, but in End of the Universe, moving and shooting in different directions is clunkier than a bootleg Flappy Bird clone, especially with the map being more constrained than Apple Maps on a 2G connection.

The barrage of asteroids certainly doesn't help either, being reminiscent of Florida traffic, and equally as diabolical. The synth-inspired soundtrack is quite hit-and-miss as well, with some tracks being pleasingly aesthetic chillwave, and others being the rough equivalent of listening to my microwave sporadically beep for three minutes. Immortal Rogue was a stroke of genius, sadly End of the Universe is just a stroke.

Pretty much I lost interest from the start, the controls made me want to toss my phone out a window and eventually after several tries I was ready to delete it. The game might actually be fun once you get the hang of the controls but it frustrated me too much to stay and find out.

End of the Universe is described as a shooter with roguelike elements. What should be kept in mind with regards to this review is that it is in early access, so is subject to change or improvement. The game itself is fine, the graphics are good but nothing really special, the sounds reminiscent of old 80s style arcade shooters which I like.

The game itself is simple enough, you clear waves of enemies, open a gateway, enter the gateway, get updates to help you survive longer, then start the next wave, a basic score chaser. Currently, it feels unpolished especially with regards to the controls and collision detection.

There are a few different options for the controls, but unless you select the option to move with the left side of the screen and tap the right to fire your heavy weapon and combine that with the weapon that basically will home in on close targets, the game is to difficult to get any decent score with as its like playing a twin-stick shooter with only one stick working.

In having to select the light weapon to make it playable, it restricts which weapons you can select when upgrading and therefore the other weapon upgrades are really unusable. The game itself is a decent enough but needs to have the controls sorted so that other weapons become a viable option.

Collision detection with regards to the asteroids which litter the playing field during the game seems to cause damage even when you are sure you didn't hit them. These issues can be sorted and that would improve the game no-end. If these issues can be sorted I think it would be a great little time-waster, until then it's too frustrating to play for any length of time

I couldn’t get into this game. The controls were very jerky and I found it extremely difficult to aim at the enemy with any real accuracy. The graphics and sound reminded me of the old space invader games but I’m afraid I couldn’t summon up the same enthusiasm for this game. I spent a while trying to conquer the controls but as I was repeatedly killed I gave up. Sorry but it’s not one I could put in my favourite games list.