If only it was the Pokemon Moon mascot...

The official Pokemon Masters Twitter account has unveiled the next Pokemon to be involved in a Legendary event called The Beast That Devours The Sun. It'll be Pokemon Sun's mascot Solgaleo, though they've not yet revealed who their partner will be.

Speculation in the replies under the Tweet suggests folks are very much in favour of that person being Lillie, who carried a Cosmog called Nebby – which eventually becomes Solgaleo – in a bag for a majority of the game. It certainly makes the most sense, I just hope they use the outfit variant where she has the big hat. 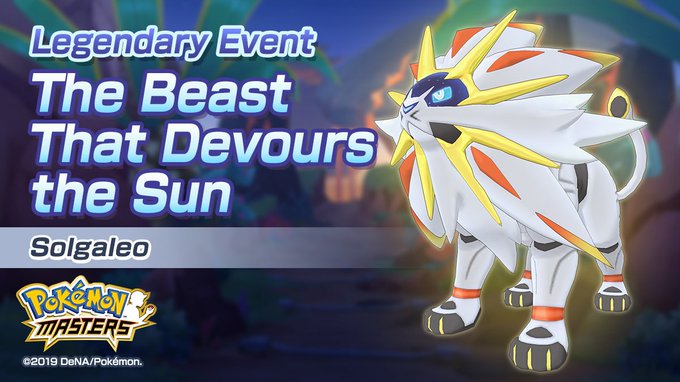 Details are pretty scarce at the moment, beyond Solgaleo we know pretty much nothing about this event. The tweet relating to it states that they've made some adjustments following the previous Legendary Event, which saw players able to get Mewtwo and Giovanni.

Hopefully, this means that it will involve significantly less grinding that the Mewtwo event. It wasn't so much obtaining Mewtwo in the first place that took time but upgrading him to his maximum potential involved an awful lot of grinding.

It required items that could only be obtained through the event, so now it's finished players won't be able to upgrade their Mewtwo any further. However, DeNA has stated previously that these Legendary events will reoccur so if you run out of time, you should have another chance in future.

There's also a host of New Year's Missions to tackle between now and 2020. It's mostly a case of completing co-op and single-player areas 50 times each. This will net you a small number of gems and various evolution materials.

Pokemon Masters is available now on the App Store and Google Play. It is a free-to-play game with in-app purchases.