Clash of Clans receives a huge update that includes a new Hero, Units and more

There's a Yeti with a bag of Yetis on his back

A sizeable update has been released for Clash of Clans bringing a plethora of new features to Supercell's popular game. The new update sees a new Town Hall, Troop, Hero, Siege Machine and Defense make their way into the game.

The new Town Hall is called Town Hall 13 and it's Dark Elixir Ice themed. Players will, of course, be able to upgrade it and this building brings a whole bunch of new content including its signature defence. This is called the Giga Inferno which protects your base with fiery attacks. If it does get destroyed it will also cause damage by exploding. 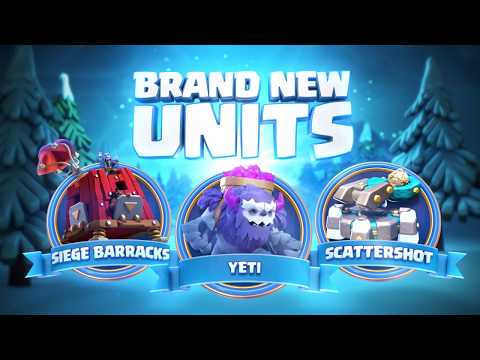 There will also be several units joining the game too. The first is the Siege Barracks which will spawn a miniature army once it's been placed on the field that will immediately, well, siege your opponent's perimeter. The Scattershot, meanwhile, is a defensive unit that may help combat this threat. It's a catapult that has an exploding projectile that spreads out like a shotgun blast, providing solid AoE.

There's also a new Troop, the Yeti, who strolls about slapping down castle walls. Not only does this fuzzy behemoth pack quite a punch, but it also carries several Yetimites in a bag on his back who will leap over walls and infiltrate the base.

Finally, there's a Hero called the Royal Champion, the first new hero since 2015. She's equipped with a Seeking Shield that will ricochet off multiple enemies at once. She also has a spear that she can throw but it's not as interesting as a bouncing shield I'm sure we can all agree.

Clash of Clans is available now on the App Store and Google Play. It's a free-to-play game with in-app purchases.