Spring Falls is a beautiful looking puzzle game that promises a calming yet challenging experience. Those two things seem at odds to me, so we've asked the App Army to give us their thoughts on how Spring Falls fares as a puzzler.

A relaxed zen-like experience amidst a serene mountain top. There’s nothing here that really blew me away, but despite the ever-present rainfall nor did it leave me washed out. The puzzles are well thought out and interacting with the environment is a joy to watch as water cascades and green pastures expand. I only found a few of the levels frustrating but overall the difficulty felt just right. It’s not a long game but I enjoyed my brief time descending its heights.

Spring Falls is a relaxing puzzle game where your only task is watering the plant in different scenarios. I honestly enjoyed playing this game (I played so far up to level 50), it is relaxing and not complicated at all. I didn't find any hard levels so far, and I could solve almost all of them without a second thought. It gave me some Monument Valley feelings, and I like the hexagonal tiles, they are original and not "boring" as the square or rectangular tiles might have been.

The only flaw is that it is a little repetitive (as I said, the ONLY task is to water the plants...), and some levels are too simple. There is no tutorial, but learning the game is overall easy. In the end, I think Spring Falls is worth playing.

This is a pretty soothing and simple puzzler, basically adjusting the flow of water to get to plants to grow and avoid having it cascade uselessly down the side. No tutorial but it didn’t really need it. Music is pleasant, controls simple and intuitive. Colour and graphics are nice. One thing I liked is that if you don’t get the puzzle correct on the first try, you can go back move by move rather than having to start the level over. That’s pretty much all I have. It’s a simple and pleasant puzzler that ought to appeal to fans. 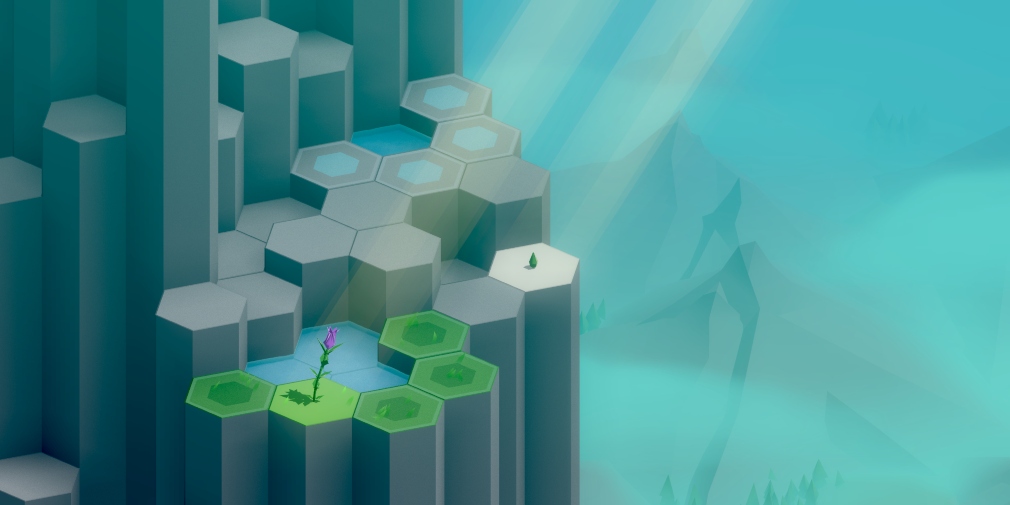 Puzzle game with a nice art style and music. Made me think of a mix between a relaxing game like Flower and Monument Valley.

Starts out simple enough. Lower the land level to guide the water so the seed (or seeds) can grow. It's an interesting, original concept for a puzzle game. I do with it has some more guidance for the mechanics. I found a couple of levels to be frustrating not because it was particularly complex, but because the mechanic was unclear.

Still, it’s nothing insurmountable yet. It’s a very enjoyable game that I will put more time into.

Overall this is a pretty basic puzzle game, but with a slight twist. Gravity is key, and paying attention to which way the waters will flow downhill is the key to success. The levels start fairly simple to get you used to the mechanics, then start to get tricky, adding multiple goals for completion and oddly clever plots of lands the rise back up as they saturate with water.

The colours are calming and somewhat muted, and the background music is calming. As Mark stated, the step by step backtracking rather than just restarting from go every time is helpful, and I used it several times to rethink a tricky level. Not anything particularly groundbreaking or revolutionary here, but all in all a good puzzler with bite-sized levels for on the go.

This game turned out to be an unexpectedly pleasant surprise for me like an early coming of spring. Here we have a hexagonal-grid puzzler, where you are tasked with growing a flower sprout into a beautiful full-grown plant. To do so, you need to "deliver" water to the said flower by making nearby hexagons turn green. I am really bad at explaining things, so to understand all the intricacies of the gameplay you better check out Spring Falls yourself.

What I can say with complete certainty is that this iOS title not only looks good but as advertised in its App Store description helps you sink into a peaceful, serene state. At times when warm weather is nowhere in sight and appalling Russian winter is raging outside, this is just what the doctor ordered.

As a fan of the puzzle genre, I was looking forward to trying this game. The game’s premise is simple enough, guide the water so that it causes the flowers to bloom. At first I unsure what I was doing, as the game has no real tutorial. I was completing early levels without realizing how I did it. Once I caught on the game became enjoyable.

For me, the game's concept was unique and challenging enough to keep me wanting to try the next level. The option to backtrack your moves was a nice addition instead of restarting the level completely. The game’s graphics and sound are well done and provide a calm, relaxing feeling to the game. This is a good game to play after playing an intense, stressful game. Overall, Spring Falls is highly recommended, especially for those who enjoy a solid puzzle experience.

This is a good puzzler that is entertaining. The graphics are bright with a soundtrack of running water and zen-like music, and although, at first, the game seems simple, it isn’t long before the challenge kicks in.

There are no fast-paced graphics - in fact, each level has the same basic scenery, but somehow it doesn’t matter because it is the puzzle that keeps you wanting more. As you progress some levels have you shouting at the screen as you think you have tried every possible combination of actions and then you take the right move and it all falls into place. I have to say that unlike many games where the difficulty increases until you can’t play any more, so far I haven’t hit a barrier, even though the odd level may have taken a while.

If you enjoy a good puzzler without any trimmings then this game is for you. 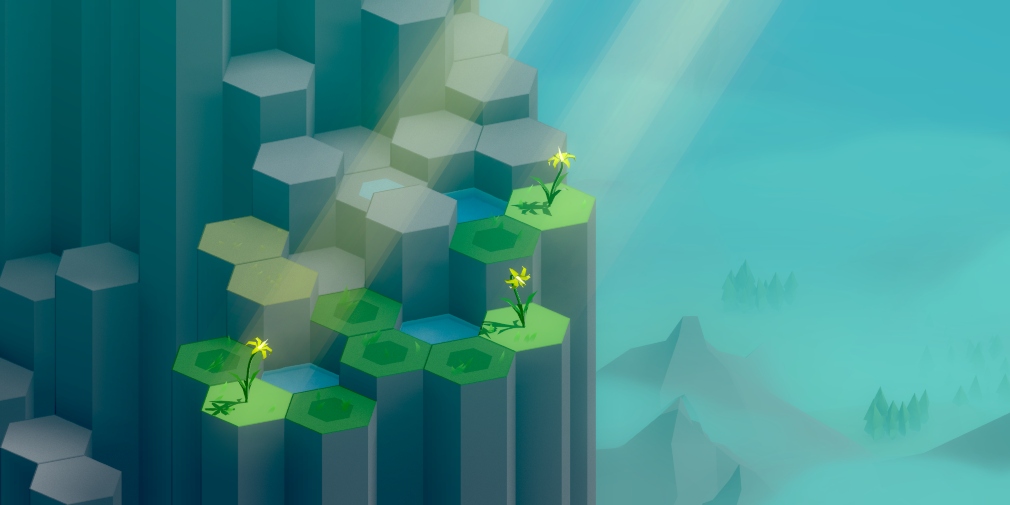 I hadn’t heard anything about this game before playing it but can safely say it might become one of my go-to puzzle games.You are met with the basic idea throughout the game where the small puddle of water must reach the grassed area forcing it to grow.

This then, in turn, must connect with the flower to help that grow. This basic idea is met with a simple graphical style and a relaxing soundtrack to accompany it. The challenge increase is subtle but does well to introduce new concepts gradually to help you get used to each one.

A great game for anyone looking for a more relaxed approach to puzzle gaming.

It’s actually pretty good, I wasn’t expecting to like it too much as a lot of puzzle games tend to be the same but it was very relaxing and I enjoyed the simple puzzles that they provided. Not too long not too difficult just about right.