Around the Alliance - Dynasty Warriors, Land of Doran, multiplayer magic and more

Did you know that Pocket Gamer is part of a massive network of websites, a network stretching well beyond our Steel Media overlords? Well, here's an article where we celebrate our part among the Steel Media Alliance, and that of some of our compatriots around the alliance.

Hello and welcome to this week's Around The Alliance, our series where we round up some of the best posts from the best mobile sites out there - that's right, from the alliance of websites that we're a part of. Think of it as us showcasing some of our work alongside that of our friends, for everybody to see.

Let's face it, there are just so many great games out there that it's impossible for any single site to cover every single bit of news, and that's why it's so great that there are so many sites out there covering them - this is our way of celebrating our friends, and the biggest news that we might have missed.

In this article, we've brought together articles from Pocket Gamer and our sister sites, 148Apps and AppSpy, while also featuring some great reads from Blue Moon Game and Touch Tap Play.

This week that takes the form of a tier list for Raid: Shadow Legends, and tips and tricks for Land of Doran. Closer to home there's news of a big update for Ria, a console-quality Dynasty Warriors and our interview with Skullgirl's Mobile devs Hidden Variable.

As I'm sure you've noticed, Pocket Gamer has been smashing it when it comes to bringing you the latest news recently. That's because we've fully rounded out our news team - something which has allowed us to look further and write more extensively. With that all set and done we've instead started casting our gaze toward features and interviews - with last week being a bumper week for the latter.

When it comes to games, a lot of us don't understand how they work. We are, after all, largely here for the gameplay, and don't need to know the magic which goes on behind the scenes.

One area where most people don't have much knowledge is Netcode - how multiplayer games communicate with one another. Most of us don't understand exactly which information needs to be transferred, and how that works when it comes to how we both see (almost) the exact information at the same time as our rivals.

We sat down with a couple of the team members from Hidden Variable Studios, the team behind the phenomenal Skullgirls Mobile, and discussed how the new multiplayer feature works. We also touched on their plans for the fighting game, and also about the sacrifices which needed to be made to bring the game to smaller touchscreens.

While we were talking about fighting games, Touch Tap Play was discussing Land of Doran - specifically everything you need to get started in the sweeping fantasy MMORPG. Their guide dives into the best classes as well as the best ways to maximise your time and actions within the game world. It is, as ever, incredibly in-depth, diving into the glyphs, boosters and shop techniques which you should be accommodating yourself with from the get-go.

Have you dived into Land of Doran yet? If you've been holding off for fear of the bumpy start that so many MMOs have then you've got no excuse now. Read up and dive in.

New to our little round-ups, Blue Moon Game have spent their time looking into the ever-popular RAID: Shadow Legends. More specifically they've been diving into each of the champions which you can unlock in the game divided into their specific tiers. Whether you prefer the Campaign, Arena or Dungeons, their list is incredibly detailed and - frankly - essential for long-term progress through RAID.

I know that one of the biggest things which hold me back from becoming a 'daily player' in a lot of these champion-centric games is a lack of visibility on the strengths and weaknesses of each character. I grow resentful as I level up Jared the Intern to Five Star and find our that he's still not even a shadow upon Markus from Accounting's power. This kind of resource is incredibly useful when it comes to making the choice between heroes - and a must-read for new players and regulars alike.

148Apps - Ria, the epic open-world adventure game for iOS and Android, gets a major gameplay update

Over on 148apps they've been talking about Ria. For those of you who haven't heard of Ria, it's been a sweetheart of  News Editor Cameron's since he laid eyes on it a few months back. There's something about the third-person RPG which has compelled him to watch it - it could be the massive world, it could be the brutal, timing-based combat. Either way, he's been keeping a watch on it.

Earlier in the month, Ria received a massive gameplay overhaul, and that's what they've been reporting on over on the site. There's been new attacks added in, as well as new maps and more. You can find out more over on the site. 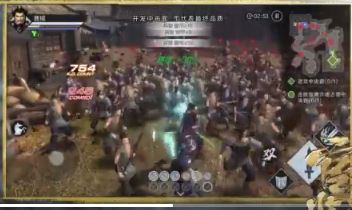 AppSpy has also been looking into action games. However this time they're reporting on a new entry in the long-running Dynasty Warriors series. It's reportedly mobile-first, and alongside the announcement (as shared by Twitter Japanese Industry maven ZhugeEX) there was a bevvy of details and some gameplay to watch.

I'm pumped for a Dynasty Warriors Mobile title. Mindless hacking and slashing, combined with the fantastical Romance of the Three Kingdoms setting, is always welcome on my phone.

Join us again soon for another recap from around the alliance.

Marvel Super War, the upcoming MOBA based on the popular franchise, will be available for iOS and Android in December in selected territories

Around the Alliance - Marvel Super War, Eve: Echoes, the Best Games of the Week and more