Over the last few years there's been a trend for mobile phones to be more than just a platform on which to play games, but also in them acting as controllers for games on other platforms:The Jackbox series has each player input their answers into their phone, using the small display as a concealed tablet or panel; XCOM: The Board Game comes with a companion app which sets turn lengths and oversees the fast-paced turn structure which keeps the game's tension high. Tales of Treachery straddles the line between co-operative and competitive play, and does it with a narrative focus that's rarely found in games of the kind.

Tales of Treachery is a four player choose-your-own-adventure party game where one of you can't be trusted. Here's our latest trailer featuring:
• A revamped art style!
• Narration by @NeilHimself (who is now narrating the *entire* game)!
• Sabotage, betrayal, and deceit! pic.twitter.com/QO6JBC7s8P — Ghost Camp (@teamGhostCamp) October 15, 2019

The set up for Tales of Treachery is as simple as synching up the four controllers/phones, each character picking a character and, well, that's it actually. Characters are entirely cosmetic, but they're each varied enough that the more enthusiastic players can build a character around them. They don't look like your traditional DnD characters either, the stoic paladin, chisled barbarian and sleepy-eyed rogues are in the bin. Instead there are blue-haired rockstar-looking giants, purple-caped figures with feathered caps, and lime-green bards complete with lutes.

What you look like doesn't matter too much though, what matters is the way you communicate and the choices you make. One of the four characters is a traitor, meaning they'll get little tips about the outcome of the events you'll complete on your way to the final boss. As you walk up the hill toward a mysterious figure at a hut, the team's traitor will be informed about the outcome of chatting to the fellow. You'll need to decide, as a team, what action you'll take once you get there. 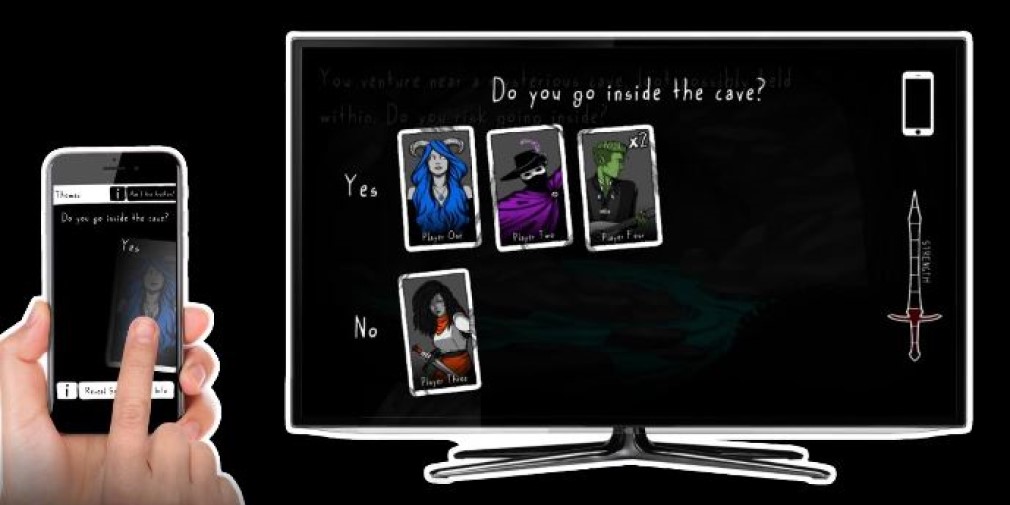 The social element of having a traitor in the midst of the players is a mechanic that has been toyed with by boardgames for many years - games like Betrayal at House on the Hill, Battlestar Galactica and Dead of Winter are built entirely around the concept. It's interesting that Tales of Treachery manages to stay away from the heavier, procedure-based board game structure, instead delivering the opportunity to sabotage while keeping the game both accessible and social.

And the traitor will sabotage.

The team's progress is tracked through a strength bar which fluctuates based on the results of the events the party run into. Ultimately that strength is what is used in a swipe-powered battle against the final boss at the end. There is, however, another thing which changes the strength of the party along the way - the campfire.

After a busy day of exploring the entire party come to rest at their campfire. There's no risk of ambush here, however there is an opportunity for the players to isolate and expose the traitor. Players choose as to whether they want to accuse a player of being the traitor, and if enough decide that they want to then one of the players can be put to the sword. If the players are right then bonus, the team grow stronger knowing that the cursed traitor character is dead. Of course, if the team are wrong and they kill an innocent then the team weakens.

If that all sounds interesting to you then it is worth following the developers of Tales of Treachery, Ghost Camp, over on their Twitter. There's no release date - or even confirmed platforms - just yet, but we'll keep you updated. Oh, and before we forget to mention it at all, the whole thing is voiced over by award-winning author Neil Gaiman, and he did a pretty standout job from what we heard while playing.

If you're looking for the latest and greatest mobile and handheld news than look no further than our dedicated section.