The past, present, and future of Rebel Racing

Developer Hutch's Rebel Racing challenges you to take on the world's top racers across a colourful vision of the US West Coast. The game seeks to offer fast-paced races for on-the-go play and some genuine long-term depth to its modes and vehicle handling.

It recently launched for both iOS and Android, and it's already sped past 1 million downloads on Google Play alone. The game's stylised visuals, sleek presentation, and arcade gameplay has made it a hit among fans of the genre, though development on Rebel Racing is far from over, with plenty of fresh content and improvements set to arrive in the near future.

You may well have played and enjoyed some of Hutch's previous games, which include F1 Manager, Top Drives, MMX Racing, and Hot Wheels: Race Off!.

Ian Griffiths, Game Director of Rebel Racing, set aside some time to discuss his gamedev background, the inspirations behind his latest title, the challenges of making a racing game for mobile, and what fans can perhaps expect from Rebel Racing going forward.

I joined the industry while studying a degree in Maths with Management at Sussex Uni, but the moment I was in, I was hooked. I rose up to become a QA Manager at Playfish where I worked on Facebook games. I moved into Product Management shortly after Playfish was bought by EA, which gave me the chance to work on FIFA Superstars and The Sims Social among other titles. When I decided to leave Playfish I somehow managed to get a job at Lionhead, makers of one of my favourite games, Fable. There I was working as a Product Manager on the AAA F2P title, Fable Legends which was sadly cancelled.

From Lionhead I had a lot of options available, but after a conversation with Hutch where I pitched a more product management focused approach to development I was hired as a Game Director. The first game I launched as Game Director was Top Drives, a strategic collectable card game, which now has over 1,600 cars. After two years it's going stronger than ever and the team running it now has made some incredible gains. After delivering Top Drives and running the live ops for a little while, I moved onto our new title which developed into Rebel Racing and has just launched worldwide!

What were your main inspirations for Rebel Racing?

I think there are a lot of inspirations behind Rebel Racing, and I've been inspired by a lot of racing games. Obviously, Forza Horizon has been a strong influence on us; I loved how that game captured a really optimistic spirit in quite stark comparison to a lot of gritty street racing titles.

I'd have to also point out that I brought my Sega Saturn into the office and annoyed people by playing Sega Rally Championship for hours on end. The handling and particularly the drifting in that game is really compelling; it's reactive with great feedback and feel and I wanted us to find a version of that.

Of course, a number of the biggest mobile racing titles were also influential to us; CSR racing, Real Racing 3, NFS No Limits and the Asphalt series are all incredible games that give their own spin on the genre from sim-like racing through to an over-the top arcade feel.

What are some of the biggest challenges involved in making a racing game for mobile?

There really are so many but there are three that stand out to me. First, competition; I mentioned a number of competitors and they all bring really compelling experiences, so standing out in that crowd is a big challenge.

Second, getting racing that feels right for mobile. With Rebel Racing we wanted something that brings all the fun and excitement of a console racing game but condensed into a 30 second race. If it's too long it loses some of that 'play anywhere, anytime' approach that the mobile platform excels, in but if it's too short then it's hard to make real-time track races meaningful.

Third, delivering gameplay that is endlessly replayable without a feeling of repetition that can give way to boredom. We made a lot of tweaks, some quite fundamental to how the game plays, and I feel like we ended with something that is easy to play but has depth. And that depth exists both in the meta-game (upgrading, collecting and racing different cars) and the moment-to-moment game where your racing line, boost timing, response to opponents and so on really comes into play.

What sets Rebel Racing apart from the competition?

I think Rebel Racing stands out by offering a fun and unique gameplay approach that holds some real car culture authenticity. It is grounded enough to be relatable and has a wonderful, optimistic visual aesthetic.

This is also a title that we plan to support and update over time so the number of cars we have, the environments and tracks, the ways you can play with friends and other players are all features that are going to grow and evolve over time. 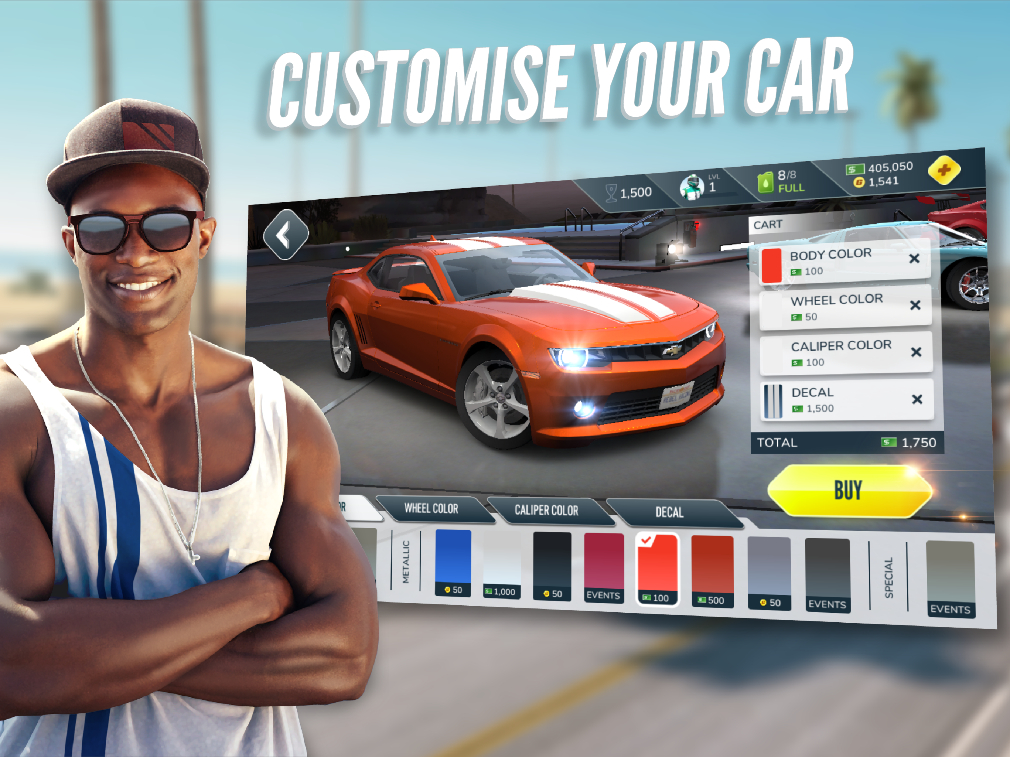 How did you go about attempting to strike a balance between accessibility and long-term depth?

Gameplay depth is delivered by fine-tuned, moment-to-moment gameplay. You can see how much this impacts the game through our player versus player ghost time trial modes, where you can see a ghost version of your opponent and the exact racing line they took.

Of course, long-term depth doesn't just exist in mastery of the gameplay and learning the races, a deep and engaging meta-game is key. We created a 5 Tier campaign complete with ladder races and a number of bosses to defeat. We also have dozens of manufacturer approved cars with their own dynamic setup which impacts their performance on each track. This is further enhanced with a rich Live Ops toolset which allows us to create timed PvE ladders and PvP time trial events.

Do you think Rebel Racing could benefit from offering tilt controls?

Possibly, this is definitely something players have asked for. I think one of the things that initially moved us away from this was how we teach it to players; we weren't keen on having players pick from different control methods when they start the game. But we're by no means against it.

Right now our input is somewhat digital; you're either pushing left or right and the wheels go from one extreme to the other in a fraction of a second. Having tilt controls would potentially give players more fine control over that. It's actually something we're prototyping right now and if we do implement the feature I think we'd put it in the options menu. But I'm not making any promises yet! 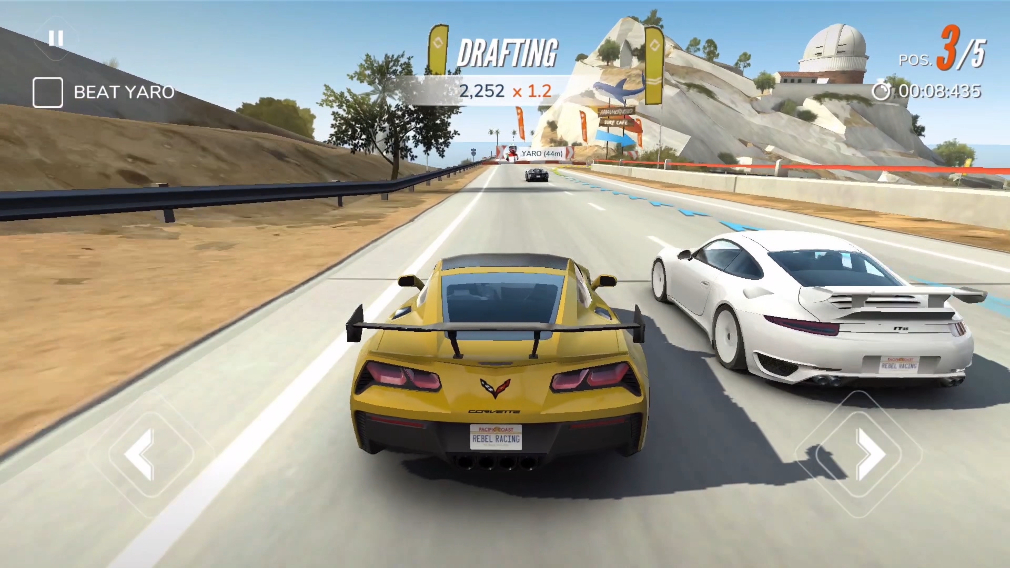 We have two big updates in the works along with some small tweaks and quality of life improvements. Our first planned update is Off-Road. We’re bringing a whole new set of Off-Road vehicles with some notable tweaks to gameplay and a rugged environment to race through, including a whitewater rapid, something our current road cars definitely couldn't handle!

We're also working on a car clubs feature. This will be our first big social feature where players can create a club and join their friends, providing extra bonuses and enabling players to send each other free gifts. It also puts them in a global clubs leaderboard; every race they participate in will contribute to the Club score. At the end of each season, based on their Club's position in the leaderboard, every player in the Club will receive prizes as long as they contributed to their Club's points.

Of course, this is all work in progress and subject to change!

Are there any specific features/modes you'd like to add in future?

Definitely, one of the fun things about going for a more track-based racer and not restricting ourselves to say, street or sim racing, means that we're free to explore more options. One of the major bits of feedback we've received from some players is that they want longer races.

We were already looking into some longer races, possibly with a 'tracks & laps' environments and modes which would be a bit more motorsport based and allow for longer races.

I'd love to look at what we could do with dune buggies. Having seen a lot of YouTube car stunts I was bowled over by watching cars ride up those massive, almost insurmountable dunes.

All of these things would take time to implement and can change, but we're looking to support Rebel Racing long term and we have plenty of ideas to expand it with.

If you're interested in a sunnier, more optimistic racer, you'll find Rebel Racing available for download now from both the App Store and Google Play.