Last Pirate cheats, tips - How to fight and survive

Last Pirate: Survival Island is the kind of survival crafting game you take your time with at first, but once you're immersed in the game, combat becomes incredibly important. Just imagine: you're all alone, on a desert island, and an animal comes into your shelter intending to eat you. What do you do?

How about we make things worse, and say that either a straight-up zombie or a skeleton come to kill you, what do you do? How about armoured skeletons? Armoured skeletons teaming up with a bear? Well it's all possible in Last Pirate: Survival Island, and that's exactly why you need to be prepared for combat.

In this guide we're going to walk you through what you need in order to stay healthy and alive in Last Pirate: Survival Island, including mastering the combat and keeping your hunger and thirst satiated so you can fight another day. Don't worry, death isn't the end, but it is definitely an inconvenience.

Now you know what you expect, read on for everything you need to know about surviving in Last Pirate: Survival Island. 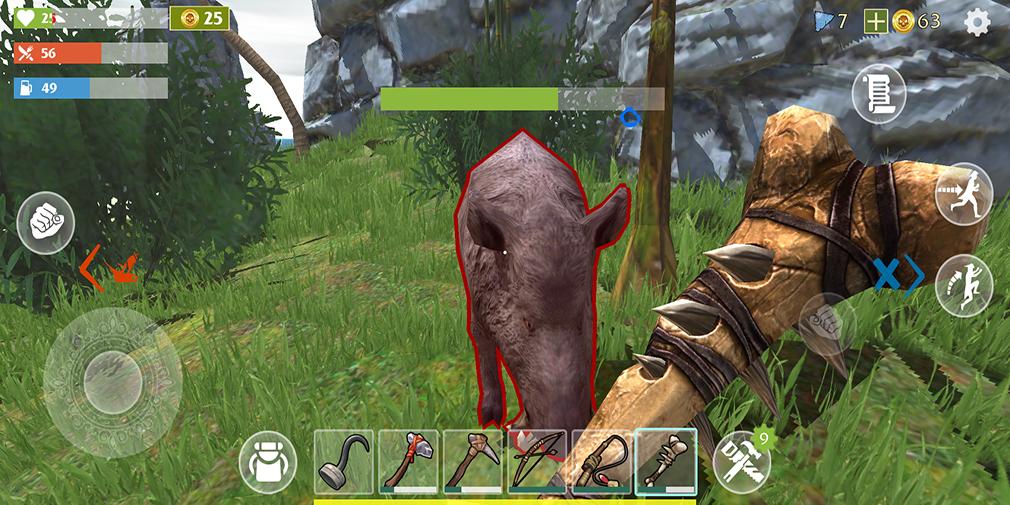 These are the important things that you will have to be looking at at all times, lest they deplete and you die. Health, hunger, and thirst. The basic tutorial will go over how you can easily, but not quickly, fulfil these needs.

Coconuts and bananas won't be good for long, though. For efficient thirst satiation, you should craft a water catcher, which will regularly offer a water bottle to restore 100% thirst.

You should also occasionally hunt chickens and pigs for their meat, which can be cooked on a campfire - though be careful not to burn it. This quickly deals with hunger. Don't eat raw meat, for the love of god.

After hunting you may have gotten hurt, and you should heal up with bandages crafted from sugar cane. You can also make health potions, but these will be more difficult to craft, thanks to the scarcity of broken bottles.

Now that you know how to fulfil your needs, it's time to craft a good weapon and get hunting animals and fighting enemies.

You should have a good ranged weapon and a strong melee weapon. For the early game, a bone club is a very effective melee weapon, though with low durability.

The bow is the only ranged weapon easily accessible early on, but incredibly useful nonetheless. Later on, guns offer huge amounts of damage.

If you die, getting everything back is an inconvenience. Everything you carried, including tools, food, items, will be lost, and even your inventory extensions will be set back - forcing you to spend gold and watch ads if you want to pick everything up again.

As such, you should leave some items in the storage at your shelter, or build an item chest to store things in, so recovery isn't quite so difficult.

Also, try not to die amidst dozens of rampaging enemies so recovery is easier…

Finally, you can kill enemies simply by abusing their AI, and thankfully, they're a bit dumb in this early access version of the game.

Simply walk backwards while an enemy is focused on you, and they are likely to get stuck in a walk cycle, unable to attack.

So walking backwards and attacking is an incredibly powerful strat, until they patch it out. Walk back too far though, and you'll be out of melee range yourself…

Last Pirate cheats, tips - How to craft everything and where to start

Last Pirate cheats, tips - How to craft everything and where to start