Big changes on the way

Rumble Stars upcoming update sees the addition of two new game modes alongside a new, Christmas-themed Rumbler. It's been a little longer than usual since the game has been updated but it's not surprising after seeing these new modes.

The first and arguably more interesting of the new modes is a 2v2 option. Now you'll be able to team up with a friend. The rules remain pretty much the same – first to 3 goals win- but the difference now is there will be two goals, with two goalies to defend and attack. I can see this getting pretty hectic with four different players involved and I'll be interested to see how different the tactics will be from the standard 1v1 mode.

The second of the two new modes is the addition of tournaments. This will allow players to work their way through a bracket until they reach a final, where if they're successful they will earn themselves a victory chest. Based on the announcement video, which you can see below, this will require three wins a row. 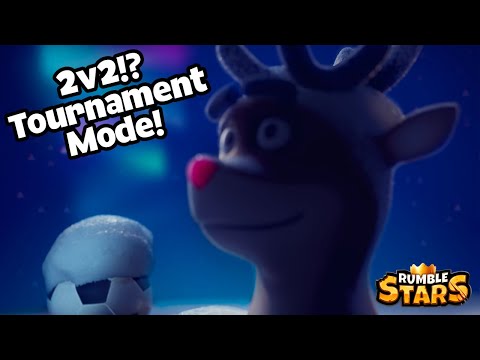 Finally, they announced the new Rumbler the Dashing Deer, who will arrive in the game just before December. This festive Rumbler is primarily defence orientated, dashing across the screen to intercept the ball. They will also prioritise passing the ball to their teammates but will shoot if there are no other options available.

They also teased an upcoming Black Friday offer, which presumably will contain a lot of Rumblers, gems and coins for a decent price. However, at the moment no more details were revealed beyond announcing there will be a deal.