From the mind behind Sensible Soccer

Sociable Soccer is said to be a fast-paced take on the most beautiful game that remains accessible while serving up a considerable amount of depth. You'll have the option to directly control your team or manage them from the sidelines to take on rival players in intense online matches.

The game comes to us from Combo Breaker, Rogue Games, and Tower Studios. Jon Hare of Tower Studios actually worked on Microprose Soccer for the Commodore 64 and the cult classic Sensible Soccer, otherwise known as Sensi. 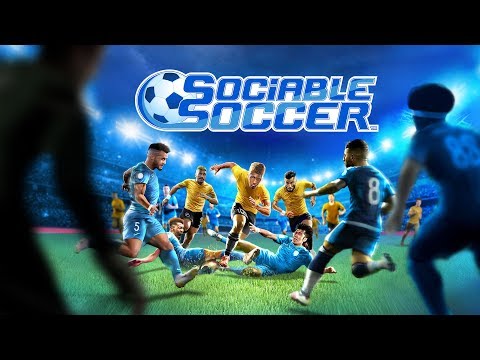 Sociable Soccer targets 60 FPS while aiming to provide console-quality visuals. Controls are heavily customisable to suit your needs and preferences, also offering MFi controller support. At launch, the game boasts 25,000 collectable players, all based on real-world stars, as well as 1,000 well-known international clubs.

Some of the game modes on offer include a persistent online Seasonal League System and a sizeable 60-hour World Tour single-player campaign. If you're the competitive type, you could always represent your favourite team and climb the game's challenging ranking boards.

Devices can be linked locally if you'd rather play with friends in the same room. And if you fancy going for a big-screen experience, you can bring out the Bluetooth controllers and hook up your iPad Pro, or a similar high-quality device, to your TV using standard HDMI cables.

Rogue Games has previously brought its games Super Impossible Road and Hexaflip to Apple Arcade, the tech behemoth's $5-a-month subscription service. Football games are always quite tricky to get right on touchscreen devices. That said, I've heard nothing but good things about Hare's previous games, so I'm fairly optimistic about this one. Sociable Soccer is now available exclusively on Apple Arcade.