Tombshaft first impressions: A roguelike to die for?

Tombshaft is the latest game from publisher Lucky Cat and developer doinksoft, the team behind Gato Roboto from earlier in the year. This one sees you delving into a seemingly bottomless cave system in search of hidden artefacts, all while dodging deadly traps and various creatures of the night. You do a whole lot of sliding down walls and navigating tight, crumbling tunnels in order to survive. Along the way, you’ll face tricky bosses and unlock new characters. So far so roguelike.

I unlocked 5 different spelunkers during my time with Tombshaft, with each playing slightly differently. The ‘Birb’, for example, can flap to gain a bit of height. This comes in useful when faced with an oncoming enemy as you can just hop your way over them instead of running away or taking the hit. The trade-off is that Birb is a bit of a pain to handle, with my struggle to master his awkward movement resulting in a fair few deaths.

Other characters I unlocked (all through coins) included the Mystic whose magical powers allow her to hover in midair and the Ninja whose high leaps and speed make him one of the most viable characters for the more monster-filled sections.

At the end of every level, you’re given the option to watch an ad to unlock an upgrade. Some of these include protection from spikes, immunity to fire, refilled hearts (they’re not automatically replenished between levels), and even a small wisp which tags along to help you out.

If you die, you’re asked whether you want to revive by paying 25 coins or watching an ad. Thankfully, you can only revive once per run using an ad, so the game still retains a fair level of challenge. It’s not exactly the toughest example of the genre – certainly a step down from the likes of Spelunky – but I still never felt more than a couple wrong moves away from death at any given point.

The first boss, like most roguelikes or rogue-lites, will likely act as a deciding point for many, forcing them to choose whether to throw in the towel or put in the effort to continue on with their quest. 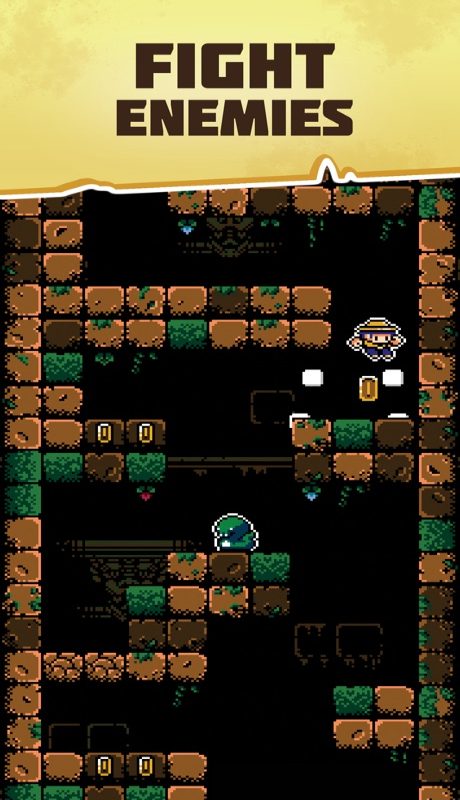 You’ll be replaying the same levels many, many times over – and runs do lack the variety of, say, Downwell or The Binding of Isaac – so it’s really all about that core gameplay, which… is fine. Good, I’d say. It works well on mobile due to its simplicity, but I never felt like the gameplay was the thing keeping me going.

It’s a slightly slower game which struggles to find a real standout hook, lacking the blistering action of Dead Cells or the joyful momentum of Downwell. After an hour or so with Tombshaft, it did start to feel as though I was only soldiering on to unlock the hidden characters. I do want to say that it’s still a good time, and I’m sure some will stick around long enough to watch the credits roll, but I'm not sure there's enough here, either in gameplay or content, to warrant picking it unless you've exhausted most of the other quality roguelikes on mobile.