App Army Assemble: Daggerhood - Is it a cut above the rest?

Daggerhood is the latest Crescent Moon game. It's a tough platformer that involves teleporting to knives, which is undeniably cool.

We thought it was decent but what does our App Army make of it? Let's find out!

This is a good looking pixel platformer with perfectly retro sounds and music. I had no problems with the onscreen controls but found early on that the timing can be difficult and kind of frustrating. I haven’t tried the MFi controller yet so that might make a difference and it’s enough reason for me to stick with it for a while.

There are a lot of these out there, more and more every day it seems, and while this doesn’t bring anything new to the table, what it does, it does well. If you’re a fan of this genre and style, you should be pretty happy with it.

A retro-style platform game that is lots of fun to play. I must confess that it took a while to master the controls and my character died many times before it clicked and I was able to get into the gameplay with any degree of accuracy. There are treasures to collect, a few enemies to kill and a fairy to bag on each level.

The background music is terrible and I turned it off almost immediately. Although there isn’t anything new in this game, it’s made well and there is a sense of challenge that I’m assuming gets even more intense as you climb through the levels. I’d say that it’s definitely worth a go. 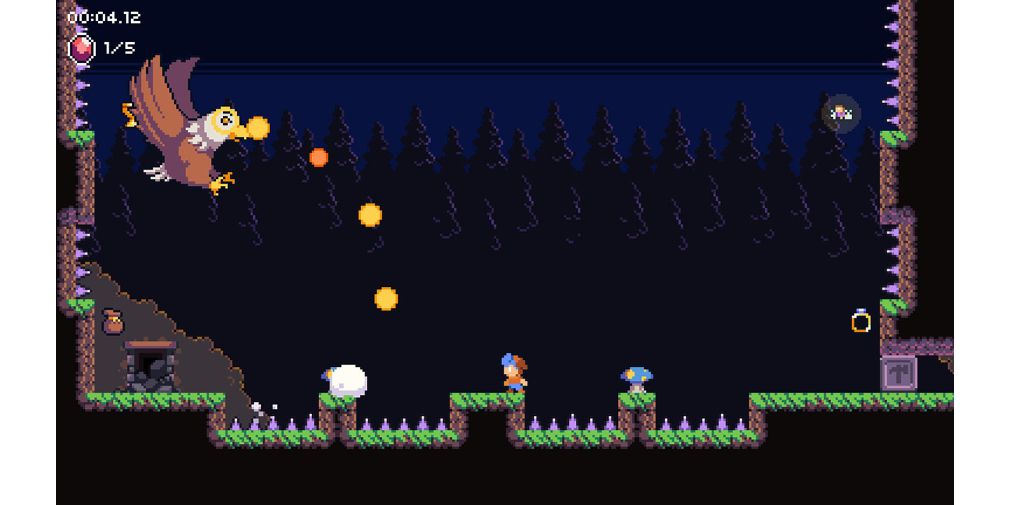 It's not a bad game. Initially, I was taken aback by the controls, but that soon gave way to a fun time figuring out how to achieve every goal in each level.
Prepare to die a lot in this game but also be ready to have a great time the way you used to in those classes games of yesteryear. It doesn’t reinvent the wheel by any means but it definitely doesn’t break it either.

Fast, furious and sometimes frustrating. I needed something to fill the gap left after completing Duke Dashington and this fits nicely. The controls are pretty tight but I did have a few deaths due to buttons not responding. Not an issue though as the levels are short and restarting is instant (which is lucky as the difficulty can be pretty brutal).

It's nice that each level has extra collectables to keep you coming back after the initial run through - although expect it to get pretty frustrated trying to 100% them all!

A fast-paced and infuriating (not in a bad way) game! This is such an easy game to just pick up and play. The controls are simple and the buttons large enough that you can’t miss pressing them. The ability to teleport to your dagger once it has been thrown adds a simple yet new element to a platformer.

Dying can be infuriating, especially when it’s no fault of the games, just your own bad timings. But the quick respawn helps the game to flow well. Each level is quick, only lasting 20-30 seconds and there are awards for completing it quicker. Getting all the items in each level seems nigh on impossible whilst trying to meet the time limit but that almost aids the replayability of the game. 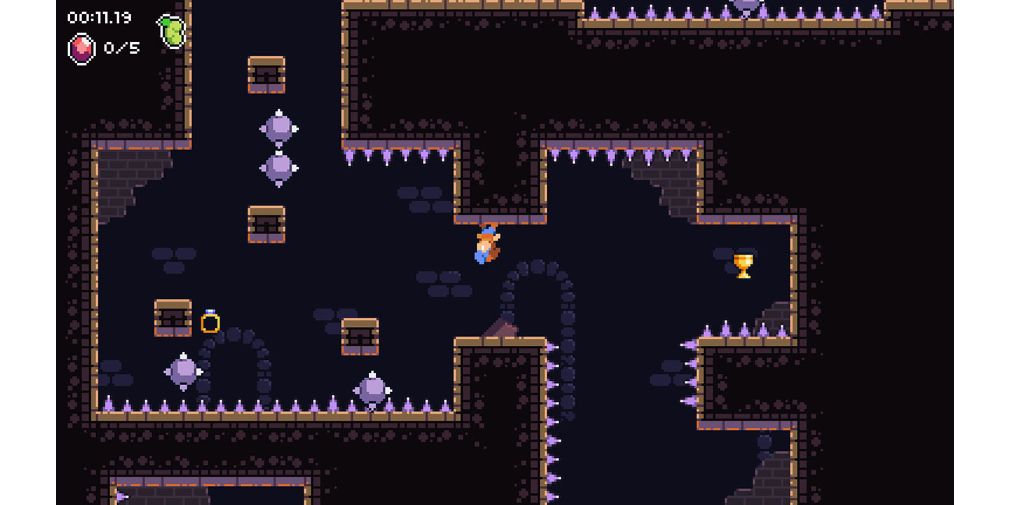 It’s been a long time since a good platformer grabbed my attention like this one. I started playing and after one hour I was still going for it jumping and dying a lot. Yeah, the game is pretty straightforward, easy to learn and play, and one of those that makes you go for that “just one more try”.

It helps that the controls are almost perfect and very responsive, but further down the road in later levels, you start craving a real controller on your hands to execute the time perfect moves you need to complete to go forward. You can do it with the on-screen controls, but you start to feel cheated on some levels because you know that you would have made it already if you had some kind of real joystick on your hands.

But what sticks in your mind is that the game has nice pixel graphics, and soundtrack is perfect for this kind of game, and the innovative mechanics you have to execute is brilliant. I’m talking about the teleporting that can be done while throwing your dagger. It’s so cool and when you get the hang of it you start thinking "why have I never played a game with this kind of fast travelling before?"

The game is very hard, and you get that when you see that you need to coordinate your jumps with the teleporting and be very fast about it to be successful. Overall I loved the game, even though it’s difficult as hell and you have to restart thousands of times in some levels until you get through it.

Simply wonderful. With great controls, graphics and soundtrack this game is great to play and fun is guaranteed!

I’ve liked previous Woblyware game in the past and this is more of the same. A platformer game on mobile lives or dies on how well the touch screen controls work and in this game, they work well.

However, I found wall jumps could be frustrating and teleporting via knife throwing (an innovation for this game) at times made me want to throw my phone on the floor. Although the early levels are easy to complete, if you want to get three stars on every level you are probably going have to play them multiple times.

The graphics have less charm than League of Evil and the thief you control looks like an indistinct blob, yes I know it’s pixelated graphics but it still looks bad.

If you disliked previous Woblyware in the past than I doubt this will convert you, but anybody looking for a playable platformer on mobile, this one is well worth checking out.

It has their typical pixel graphics and perfect controls.

Let's talk about the game: it's divided into small levels that you have to complete within a certain amount of time in order to collect 3 stars. If you want to beat the target time it's difficult to collect all collectables in each level, and that's good cause it adds great replayability in each stage.

You have 5 jewels to collect in each level, and one-timed fairy; this last one will be in the level only for a certain amount of time, after which she will disappear, so you will have to be fast and precise in order to collect all of them.

The great twist compared to other similar platform games is that you can use your throwing dagger to teleport around the level: with a button, you throw your dagger and pushing it again will teleport you in the exact position of the dagger at that moment. It's a very good game even with touch controls since Crescent Moon games are always perfect in this aspect. 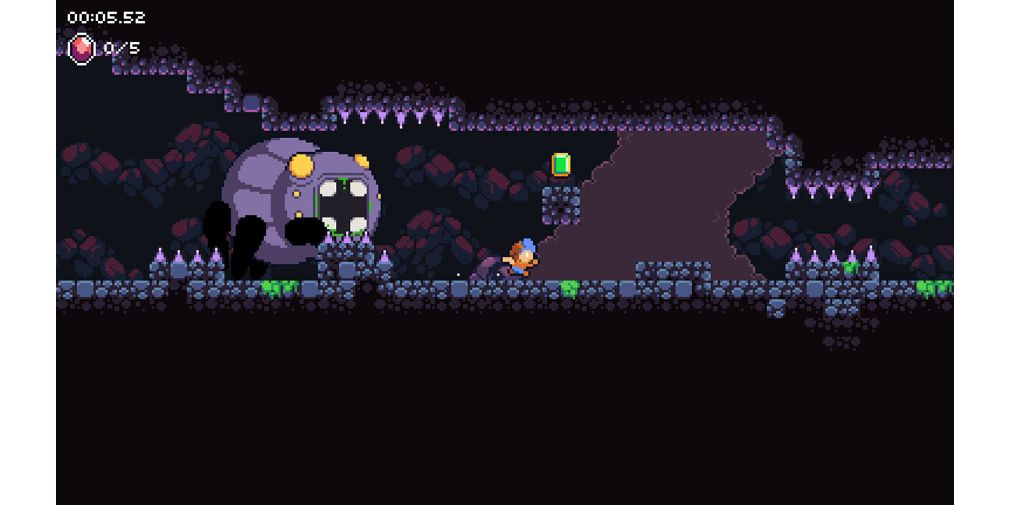 I love hardcore games, especially platformers and Daggerhood delivers on those specifications. Solid controls and a cool mechanic make this a good experience on the go.

The visuals and animations remind me of Celeste, one of the most beloved platformers in recent years.

A well-executed platformer game, with pixel-art graphics. It consists of a succession of levels, using the same gameplay mechanics, Jump, Double Jump, throw weapon and... teleportation to the weapon's location! But no skills to unlock or evolve during the adventure.

Levels are fun but look familiar, not a real surprise. The game works around the idea you have to find 5 items and one secret one (the fairy) without dying.
Music and sound effects are simple but do the job. A good little game for a short play session

This is a good looking pixel platformer with perfectly retro sounds and music. I had no problems with the onscreen controls but found early on that the timing can be difficult and kind of frustrating. I haven’t tried the MFi controller yet so that might make a difference and its enough of a reason for me to stick with it for a while.

There are a lot of these out there, more and more every day it seems, and while this doesn’t bring anything new to the table, what it does, it does well. If you’re a fan of this genre and style, you should be pretty happy with it. 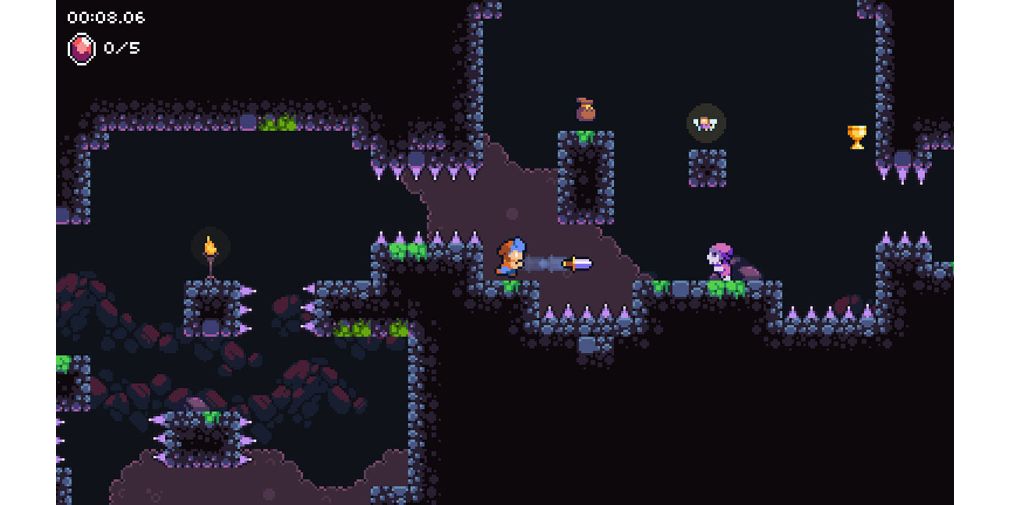 Graphically I'm torn over Daggerhood. The characters aren't memorable but they are clearly defined and you can immediately tell what you're up against so they work in that respect.

Controls need to be tight and thankfully they are. As much as they can be on touchscreen anyway. I'd love to try this on a Switch. One slight improvement I'd like would be if the daggers stuck in the wall for a split second to give you more time to teleport into a wall jump.

Levels are great with multiple objectives that require increasing mastery of the controls to collect. All apart from finishing the level are optional but it's nice to have a reason to hone your skills. Getting to some parts of a level can require real skill.

All in all a neat platformer with an interesting teleportation mechanic.

Overall I love the look of this game. Not sure why but I enjoy pixel style graphics for my platformers. It works for me. The colour scheme of the first world is dark blues and blacks and I hope each of the worlds continues to have its own theme (much like the platformer games I grew up with.).

The controls are tight for touch screen, but still require a great deal of precision, especially to make a double jump or wall jump work in some spots. The dagger teleport feature is a pretty good idea, but it does take a few trial runs to develop a good aim and sense of timing to keep from hitting an enemy or spike wall.

I did hook up a gamevice to my iPad and found Daggerhood ready and able to use MFi controls. This also made everything feel more precise, which is to be expected from a touch platformer. It took me several tries to get past the first boss, but now I’m ready to forge ahead and face the challenges of the next level. I would definitely recommend this one!

Daggerhood review - "An action platformer with a teleporting twist"