The roguelite genre has had plenty of interesting entries over the years, but when it comes down to games which twist harsh deaths into new beginnings, there are few which have achieved quite so much as Rogue Legacy.

To say that Rogue Legacy wasn't revolutionary when it originally released on PC back in 2013 would be a stone-cold lie. Much like Spelunky before it, Rogue Legacy took a notoriously hard section of games and sprinkled persistence and a new form over them - making the Roguelike genre accessible for a much wider audience. Add into that the sheer character that comes from the geneology system, and the clever family-castle upgrading system and you've got a formula for both success and replayability.

Was it worth the wait?

When it comes down to reviewing games years later on different platforms, a lot of the focus comes down to visuals, controls and inputs. A few years ago this was a definite sticking point for mobile ports, however it seems to be less so these days. It is clear that Cellar Door Games put lots of thought into the controls for their game - and due to the fantastic, cartoon art-style it required no visual tweaks to modernise.

For those of you out there who haven't heard of Rogue Legacy before, it's a 2D-platformer about a long-line of heroes who must recapture a castle. Each run is a character from this long-line, and you control them from their approach to the castle through to their untimely death. Once they've popped their clogs you get to spend the wealth that they earned by besting bosses and beasties on improvements to the family keep. 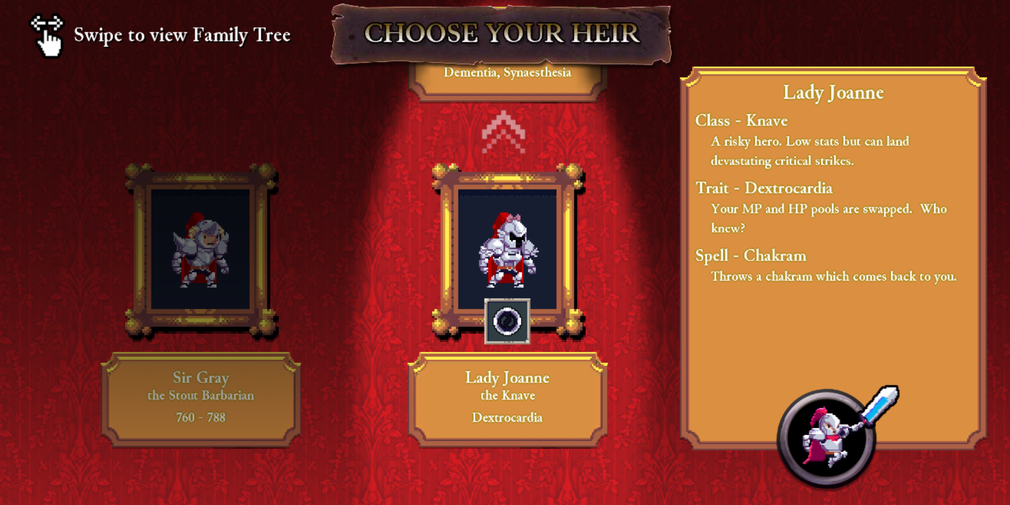 Each generation isn't just different due to those improvements though, you've also got genetic tweaks. The potential heirs can be different classes (which you can unlock more of through upgrading the family castle), or know different spells. However what makes it especially interesting is that they also have certain traits. These traits range from purely aesthetic changes - like 'Balding', which removes the character's hair and changes some loading screens to feature the word 'Balding. This range extends beyond that to traits which deeply alter your experience, by making your character different sizes or even see enemies which are not really there.

These traits, and this randomisation, adds some much needed variety to the run-die-run-die formula, and sometimes also adds in an amazing risk-reward loop. Do you take the fragile, giant heir? They'll deal more damage but shatter like glass, Or maybe take the coprlaliac mage with the amazing skill-set? They'll swear each time they're hit, but they'll do mega damage. There's a lot of combinations to be found even with the basic classes, but when you add in the classes who are based around high impact, no defnese, or even just built to maximise their coin gathering, it gets especially interesting. 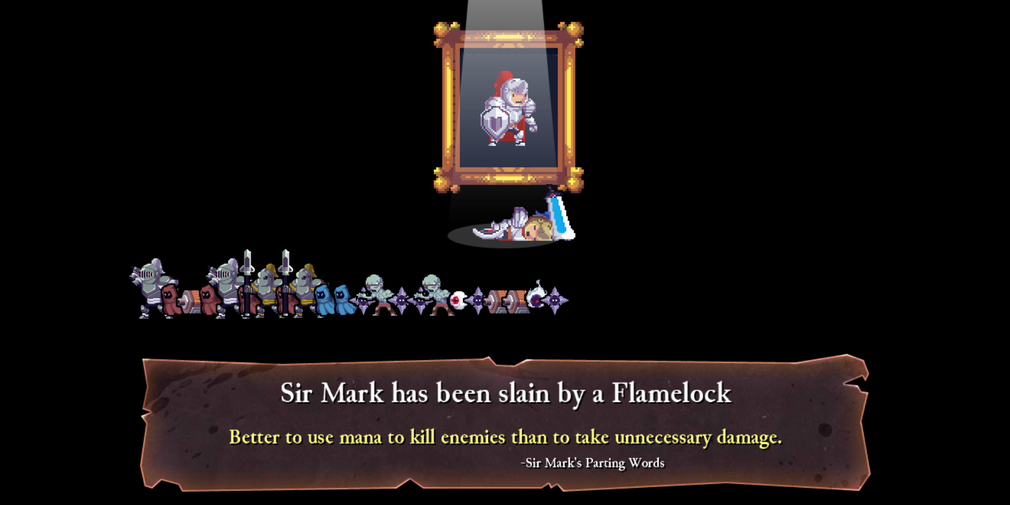 Persistence does exist beyond the family keep. You can find blueprints for new armor and runes, these give you new tweaks to your character or improved resiliance. You can also spend a bunch of money to hold the castle design to be the same as your previous run - useful if you want to reattempt some bonus chests (the best way of getting new runes or blueprints) or simply want to give a boss another try. Combine this with some of the later classes and a castle upgrade which means you don't have to give all of your money to Charon when reentering the castle and it's a very cool addition.

However, the first time people play Rogue Legacy there's a 99% chance that they'll give up and restart before getting close to the finish. In order to beat the game you need to defeat a series of bosses which are littered through the different sections of the castle. Each section brings a step in difficulty and new enemies, however all of the enemies in the game level up as you specialise further too. This means that if you decide to upgrade every upgrade just for the sake of spending your money you'll be making it harder and harder to push forward through the castle. When you reach this point do yourself a favour and abandon the bloodline, you'll be on a much better footing on your new game. 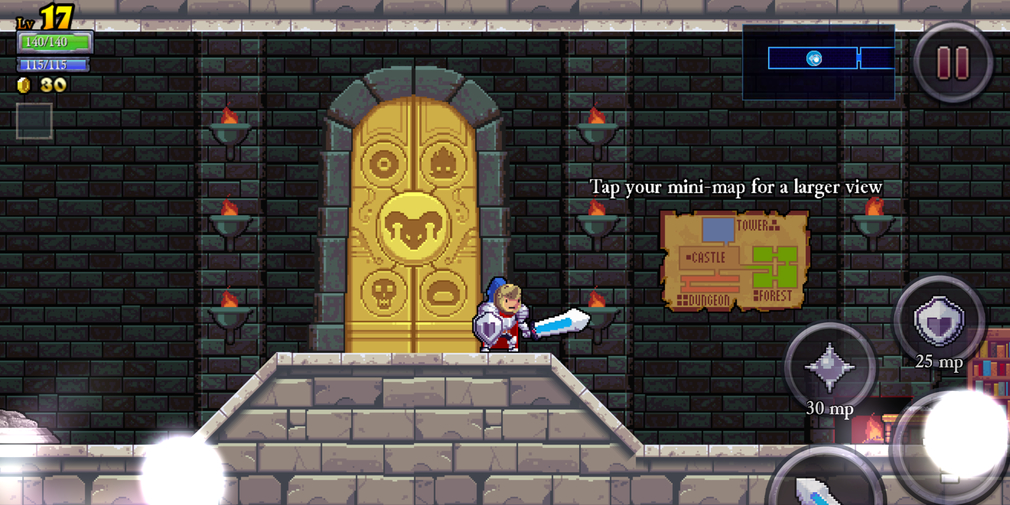 Now, lets return to what make's Rogue Legacy: Wanderer Edition so different from the other iterations: it's controls. Cellar Door have gone the extra mile in getting their controls working on touch screens. There's an amazing options menu which allows you to move and resize the input buttons, and there's sensitivity options for the movement virtual joystick and the swipe-to-dash function. While you are originally presented with the 'Lap' or 'Grip' options (which realign the action buttons) it is well worth revisiting the control options once you've finished your first run, so that you can tweak it to your heart's content.

A fantastic port to touchscreen of one of the most well-rounded platform-roguelites out there. It's about time.
By Dann Sullivan
| Sep 4, 2019 |
iOS + PS Vita + Steam ...
Find out more about Rogue Legacy
SEE COMMENTS

Hoppia Tale is a cute, Zelda-inspired adventure for iOS and Android